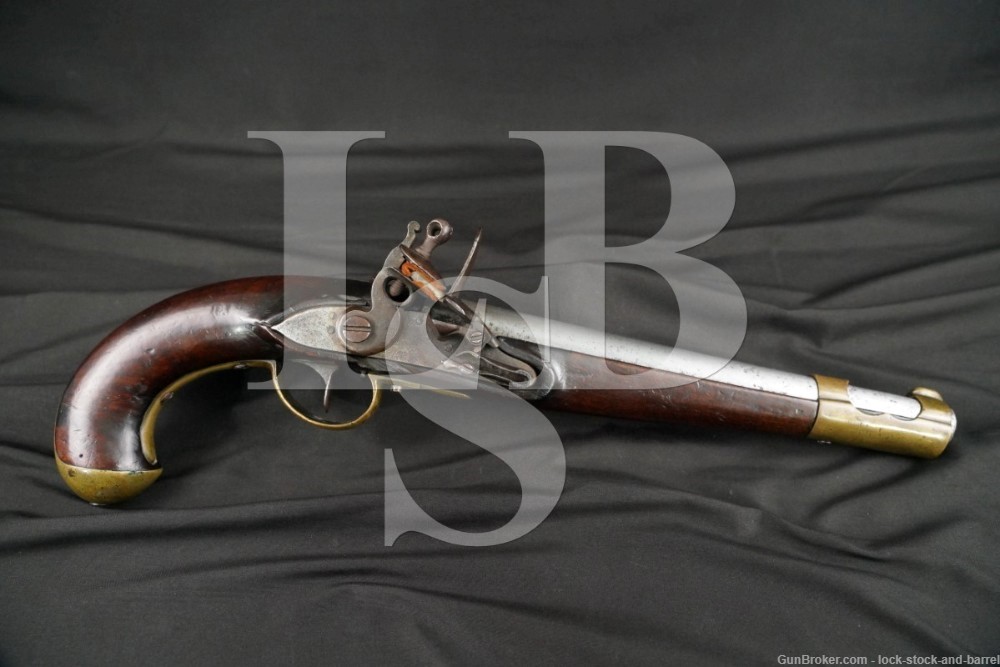 Sights/ Optics: There is a blade fixed to the front of the nose-cap.

Stock Configuration & Condition/ Grip: The stock is wood featuring a brass nose-cap, a lock-plate opposite a brass side-plate and pistol grip with brass cap. The stock has some light-moderate handling marks, nicks and scuffs. Notably, there is a light nick where the side-plate meets the stock by the front lock-screw, a light crack extends from the rear lock-screw to the chamber, there is a light crack at the tip of the top-tang, there are some light nicks above the lock-plate and there is a moderate chip at the bottom of the lock-plate adjacent to a patch repair. Overall, the stock is in Good condition for an Antique.

Bore Condition: The bore is dark with scattered light erosion.

Overall Condition: The pistol retains about 2% of its metal finish. The brass parts are tarnished, coated in light surface oxidation and have scattered light handling marks. There are scattered patches of verdigris concentrated around the recesses and a notable patch on the left side of the grip-cap. The bright parts are coated in scattered patches of light surface oxidation and have some light handling marks. Notably, the oxidation is concentrated on the lock-plate around the pan and on the hammer. Also, the trigger gaurd assembly is broken at the bottom tang with the damamged part visible at the screw directly behind the trigger guard, the trigger guard will fall out if the screw directly ahead of the trigger guard is removed. The screw-heads are tooled but remain serviceable. The markings on the lock remain clear but the others remain mostly clear. Overall, the pistol is in Good condition for an Antique.

Our Assessment: This is a French pistol which was manufactured at Charleville sometime between the end of the Jacobin (1794) and First Imperial periods (reign of Napoleon I began in 1804). This is based on the lock-plate’s marking, during the Bourbon period (the royal family that ruled France until the French Revolution and briefly returned to power after the Napoleonic Wars) lock’s were marked to indicate that French martial arms were made at “Royal” armories while during the reign of Napoleon I and his nephew Napoleon III French martial arms were marked as being fabricated at “Imperial” armories. Also, during the brief period of Jacobin rule, lock-plates were marked with the “Libreville” stamp. This particular handgun lacks these markings, this would place the gun’s manufacture during the period between the end of the Jacobin reign and Napoleon becoming Emperor of France in 1804. The gun’s flintlock ignition system would preclude a later date of manufacture. The gun has an interesting construction and does not conform to the type of French handguns found in our reference material, considering the unstable political situation in France during the time period this gun was made it is not hard to fathom that guns were made in a more ad-hoc fashion (i.e. less uniform). The gun has some handling wear but it remains a mechanically sound old handgun. Good luck on your bid!