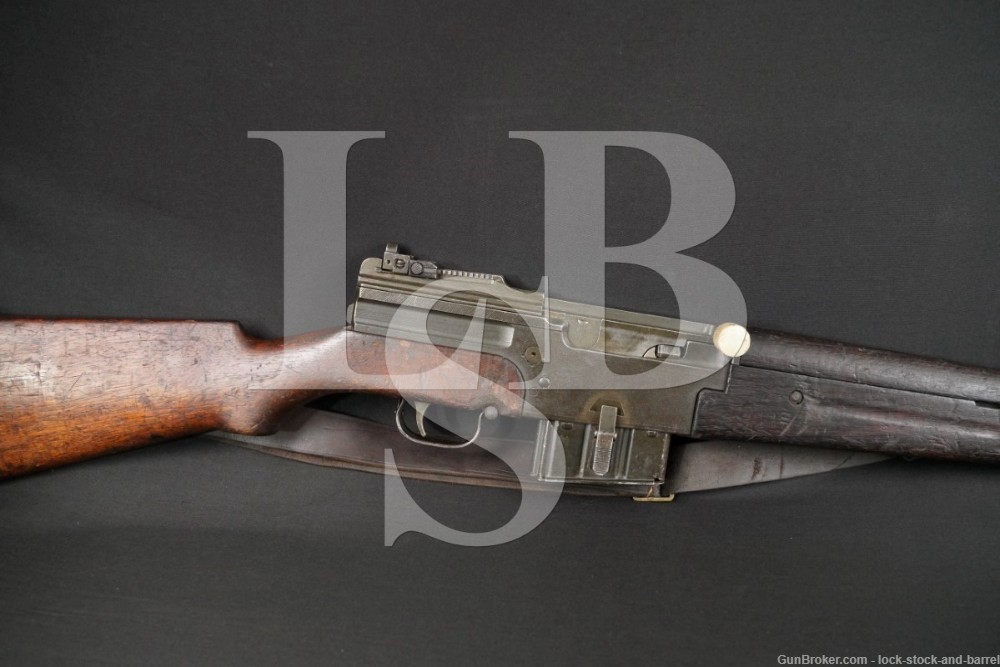 Sights / Optics: The front sight is a tall post set between 2 protective ears. The rear sight is an aperture attached to a sliding escalator. A screw on the right rear allows for adjustment for windage. It is marked from “2-12”. The left side of the receiver has a scope rail machined into it.
The grenade launcher sight has been removed. It was originally  attached to the left side of the nosecap/sight assembly. The grenade launcher has also been removed. The oversized knurled screw on the left front of the  nosecap/sight assembly is for adjusting the missing grenade launcher.

Stock Configuration & Condition: The hardwood stock has a pistol grip, finger grooves, metal nosecap with stacking loop, large hole for the included bayonet, barrel band with sling ring, sling bar, sling well, and a metal buttplate. The buttplate shows scrapes, scratches and surface erosion. The wood shows numerous scrapes, scratches, and compression marks. Several have damaged or removed small portions of the surface wood. The LOP measures 12 7/8 inches from the front of the trigger to the back of the buttplate. The stocks rates in about Very Good overall condition.

Bore Condition: The barrel has been counterbored to about 1/2 of an inch back from the muzzle. The bore is gray and the rifling is deep. There is erosion in the bore. It is more prominent in the grooves and near the muzzle.

Overall Condition: This rifle retains about 87% of its current metal finish as refinished. Surface erosion shows through the new finish. The metal shows scrapes, scratches, discoloration from oxidation and thinning on the leading edges of the metal. The most prominent thinning is on the barrel where the grenade launcher used to be. An area on the right side of the receiver shows discoloration around the magazine catch. The bolt shows operational wear. The screw heads show use. The markings are deep. Overall, this rifle rates in about Very Good condition as refinished.

Mechanics: The action functions correctly. We have not fired this rifle. As with all previously owned firearms, a thorough cleaning may be necessary to meet your maintenance standards.
The top front of the bolt carrier has an integral stripper clip guide for loading the magazine while inserted.

Box, Paperwork & Accessories: The rifle comes with a leather sling and a magazine. The 10-round magazine shows scrapes, scratches and discoloration.

Our Assessment: This French MAS MLE 1949 is a scarce French Military Rifle as only around 20,000 were made. This one has been refinished so it looks good for its age. It has deep markings on the receiver and a good bore that can still put a ton of lead down range. This MAS 1949 was originally made with a grenade launcher. The grenade launcher and grenade sight have been removed. This French semi auto to add to your Military collection. Good luck.