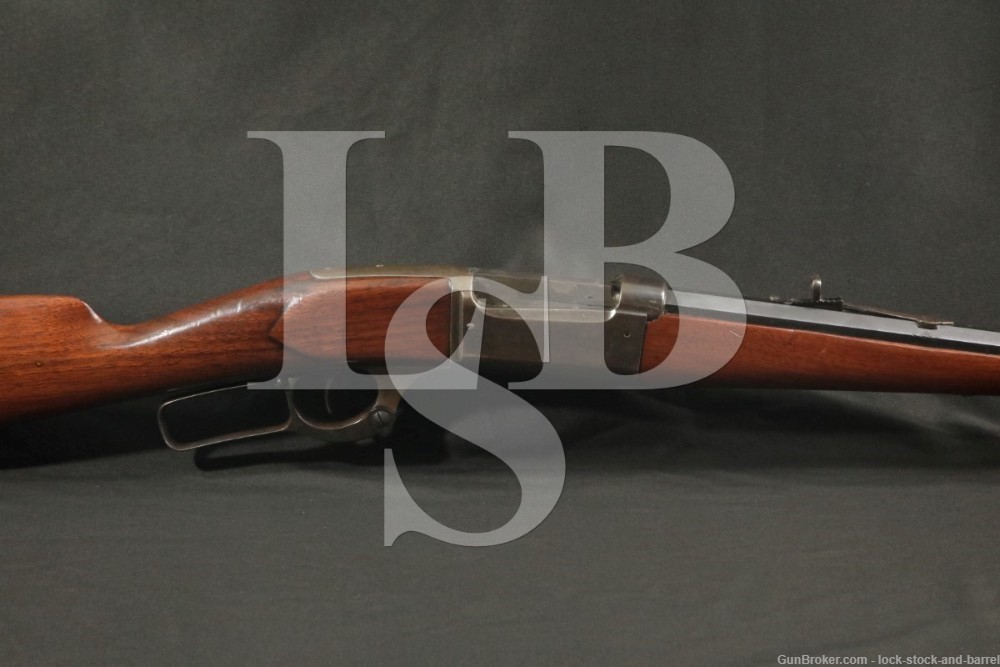 Barrel Length: The octagon barrel is 26” in length.

Stock Configuration & Condition: The stock is a two-piece lacquered walnut with a straight grip, crescent shaped buttplate and a 11 1/8” long forend with a Schnabel tip. The buttstock, which does not have the proper perch belly, is shy of the buttplate at the toe and shy of the metal along the lower tang. There is a gouge in the wood at the toe and oil staining around the receiver and in old bruises. There is a deep drag line in the right buttstock flat, dings in both side flats and several more dings scattered over the remainder of the stocks, with a few bruises and several drag lines in the forend. The LOP measures 13” from the front of the trigger to the back of the buttplate. The buttplate shows moderate wear at the heel, and dings and a few spots of light erosion under its blued finish. The buttplate is in about Very Good condition as refinished. The stocks rate in about Very Good condition as refinished.

Type of Finish: The finish is blued with a case colored lever boss. The receiver appears to have been refinished with cold blue.

Finish Originality: The finish on the lever boss appears original, but the remaining surfaces have been refinished.

Bore Condition: The bore is dark with moderate wear in the rifling and very light erosion scattered throughout the bore. Our bore gauge measures a ME of about 3.0.

Mechanics: The action functions correctly. The flat safety blocks both the lever and the trigger. We did not fire this rifle. As with all used firearms, a thorough cleaning may be necessary to meet your maintenance requirements.

Our Assessment: The Savage 1899/99 model rifles have quite a history. They were preceded by the Model 1895, which was the first hammerless lever-action rifle produced. A hammerless action was useful as it reduces the lock time, allows the rifle to be fired more accurately and is less likely to jam in brush or snag in clothing. The 1895 and 1899/99 models used a rotary magazine to hold the cartridges, using a spring-loaded spool with grooves. The 1899/99 models added a counter to the spool to indicate how many rounds are loaded. The rotary magazine allowed the use of spitzer bullets, which could not be used in the Winchester rifles of the times because the pointed tips in the tubular magazines could cause accidental discharge. This gave Savage a lead in producing rifles that could handle high velocity smokeless powder cartridges with bullets offering flatter trajectories than other lever-action designs. This is a Savage Model 1899-B, made in 1903. It has a 26” barrel chambered in .30-30 Win. The metal and wood surfaces have been refinished and we believe the buttstock was replaced. The rifle is in about Very Good condition as refinished with about 63% of its current remaining. The bore is dark with moderate wear in the rifling and light erosion scattered throughout the bore. This would make someone a great deer rifle: .30-30 Win. ammo has the distinction of having killed more deer in the United States than any other cartridge, and is still popular, especially in wooded areas where long range shots are not common.