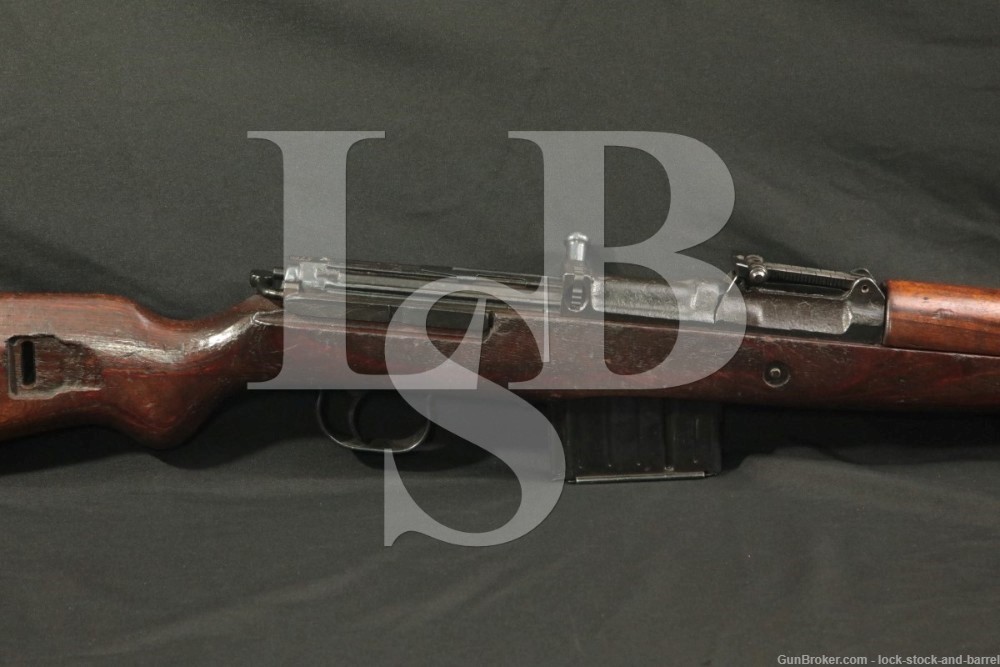 Markings: The left side of the frame is marked with an “X” above a NSDAP style eagle over “214” which was a waffenamt used by Berlin-Lubecker Mashinenfabrik, “5770d” which is the serial number, a faded proof which is likely East German, “K.43” which was the model designation and “qve 45.” which was the code used on gun’s made at Berlin-Lubecker Maschinenfabrik and the year the gun was made. The nose-cap has been force matched to the rifle with an electric pencil. The gas cylinder and its connecting rod are force matched with an electric pencil. The portion of the barrel obscured by the handguard is marked “DB” on the left and has the Berlin-Lubecker Mashinenfabrik waffenamt stamped twice on the right. The action cover, bolt carrier, firing pin assembly, the bolt (the bolt’s original serial number 477 is struck out and it has the eagle over “359” waffenamt which indicates it was made by a separate company then the action) and the locking lugs (they appear to have been serial matched, but were poorly marked during the refurbishment process and have the eagle over “359” waffenamt) are all force matched.  The belly is marked “5770”.  The left side of the magazine is force matched to the rifle, “5770”,  but also has the serial number “6672” penciled in, “aye” code for Olympia Buromashinenwekre A.G., an eagle above “WaAB43” which was the waffenamt for Olympia Büromaschinenwerke A.G. and the model designation “K.43”. The bottom of the magazine is also force matched “5770”. The barrel is marked “CAI ST. A. VT. / G43 8MM GER”.

Sights/ Optics: The front sight is a raised banded ramp with a dovetailed blade under a protective hood. The rear sight is a “V”-notch tangent leaf marked 1-12, inclusive.

Stock Configuration & Condition/ Grip: The stock is two-pieces featuring a nose-cap secured by a spring with a fixed sling bar on the left side, a ventilated handguard, a through bolt, a semi-pistol grip, a straight comb, a sling well in the butt and a metal butt-plate with storage compartment. The stock has some scattered light handling marks, nicks and scuffs. Notably, the handguard has light play on the forend. There are no chips or cracks. The LOP is 13.5” from the trigger to the rear end of the butt-plate. The butt-plate has some finish loss around the leading edges, some light surface oxidation and light handling marks. Overall, the stock is in Very Good condition.

Bore Condition: The bore is semi-bright with mostly sharp rifling. There is light-moderate erosion concentrated in the grooves.

Overall Condition: The rifle retains about 90% of its finish. There are some light handling marks, nicks and scuffs on the gun’s metal surfaces. Notably, there is some finish loss around the muzzle and front sight’s leading edges. Some of the markings have been obscured during the refurbishment process, but most remain clear. The screwheads are light tooled and remain serviceable. Overall, the rifle is in Very Good condition.

Our Assessment: The Gewehr Modell 1943 was a German semi-automatic rifle introduced for service with the Wehrmacht towards the end of WWII. The concept originated with the Gewehr Modell 41, but that gun proved unreliable with only a small number ever produced by Walther and Mauser. Following the German invasion of the Soviet Union in June of 1941 a number of Soviet SVT-40 semi-automatic rifles were captured and the Soviet gun’s superior engineering was integrated into the Gewehr 41 and the resulting reworked rifle was the Model 1943. The gun entered production in 1943 and a number of companies manufactured the rifle with over 400,000 manufactured before WWII ended. In April of 1944 the Gewehr 43 was renamed the Karabiner 43 but the gun was identical in all respects except the markings.

The Gewehr 43’s story did not end with the Third Reich, surplus rifles continued to service in the East German (Deutsche Demokratische Republik or DDR) security services into the 1950s. This particular specimen was refurbished for service within the DDR and has parts force matched with an electric pencil, a method typically seen on Eastern Bloc weapons. The gun also has a sunburst proof on the left side of the frame used by the DDR and a “X” which indicates the gun was captured by the Red Army (the “X” was placed on captured weapons by the Soviets). The gun was eventually phased out in the 1950s and put into storage before being sold commercially following the fall of the Berlin Wall. This rifle is well preserved with only light handling wear and should prove a fun addition to any historical firearms collection. Good luck on your bid!