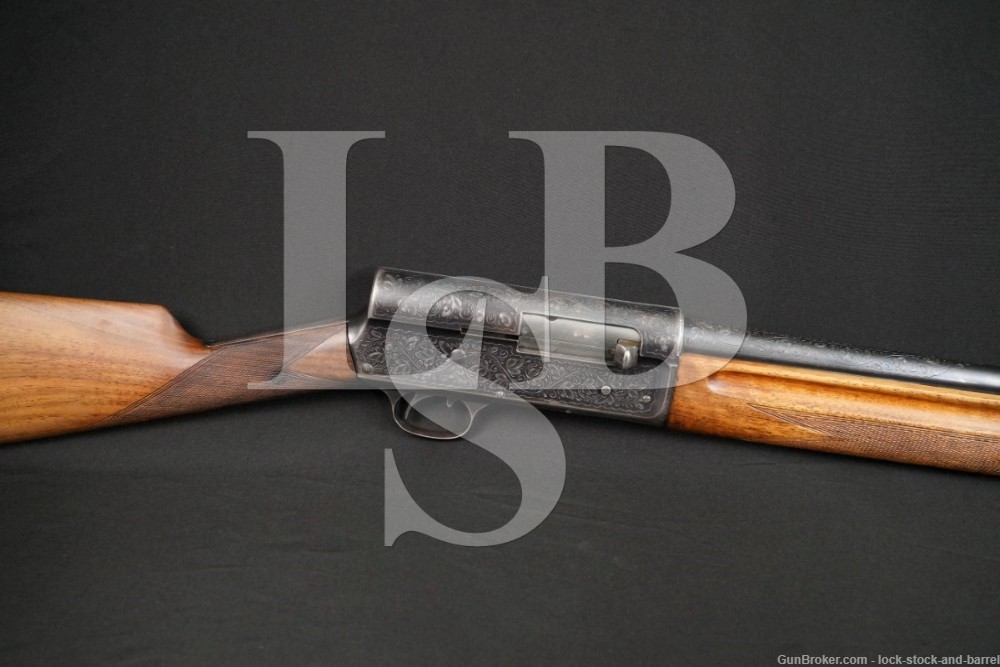 Make: Made in Belgium by Fabrique Nationale for Browning

Barrel Length: The barrel proper is 26″, it is 28″ to the end of the installed Poly-Choke.

Choke: An adjustable Poly Choke has been installed.

Sights / Optics: There is a white bead in a serrated, ramped base mounted to the rear of the Poly-Choke assembly. The top of the receiver has a sighting plane which is serrated for glare reduction. There are four blind-filled holes in the top of the receiver, one to each side of the sighting plane at the front and rear, which were likely originally drilled and tapped for some sort of optic mount.

Stock Configuration & Condition: The stocks are two-piece checkered walnut with finger-grooved forend, straight wrist, straight comb and ventilated brown rubber Pachmayr White Line recoil pad. The forend has a crack through the top, mostly concealed when assembled. The wrist has a repaired break, easiest seen in the left side in and behind the checkering, but also continuing on the inside through the tang inlets and a little to the right of the top tang at the rear. Pins have been installed on each side of the wrist as part of the repair, appearing as darker circles in the wrist checkering. Apart from this damage, the stocks show faint handling wear with well defined checkering (re-cut). The LOP measures 14 1/8″ from the front of the trigger to the back of the recoil pad, 13 1/8″ to the back of the wood. The pad has faint wear and is still supple. Overall, the stocks are in about Good condition as refinished and repaired.

Finish Originality: The finish has been touched-up around the filled holes in the top of the receiver. Otherwise, the finish appears Original.

Overall Condition: This shotgun retains approximately 65% of its metal finish. The finish is thinning at all edges. There is fairly evenly scattered light finish wear, perhaps a little more in the receiver and the tangs have more notable handling wear. The worn areas show discoloration from oxidation. There are scattered minor nicks, scuffs and scratches. The action shows operational wear including on the bottom of the barrel in front of the forend. The action spring tube has broken from the top tang and been repaired at some point in the past, but the repair weld has cracked and the tube has play to the tang. The screw heads range from sharp to disfigured with a useable slot. The markings are clear. Overall, this shotgun is in about Good condition.

Mechanics: The action functions correctly, however the action spring tube has broken from the top tang and been repaired at some point in the past. The repair weld has cracked and the tube has play to the tang. It may be necessary to properly repair the tube for the gun to function properly when firing. We have not fired this shotgun. As with all used firearms, a thorough cleaning may be necessary to meet your maintenance standards.

Browning would eventually license the design to FN in Europe and later to Remington for their Model 11 and to Savage Arms for their Models 720 and 755. These designs went on to be a great commercial success, the first truly successful autoloading shotgun. This is an example of one of the earliest guns, part of the initial order of 10,000 placed with FN in 1903. The gun’s early features include a safety mounted inside the trigger guard, the lack of locking screws and absence of a magazine cutoff. Any of these first 10,000 would be of interest to Browning collectors, but this is also a high-grade gun with extensive engraving on the receiver which continues onto the rear portion of the barrel. Coming up on 120 years old, the gun has had the stocks refinished and repaired and the action spring tube will likely need some work before the gun is in firing condition. Still, this factory engraved and very early Browning Automatic Shotgun will be a wonderful addition to even an advanced collection. Please see our photos and good luck!