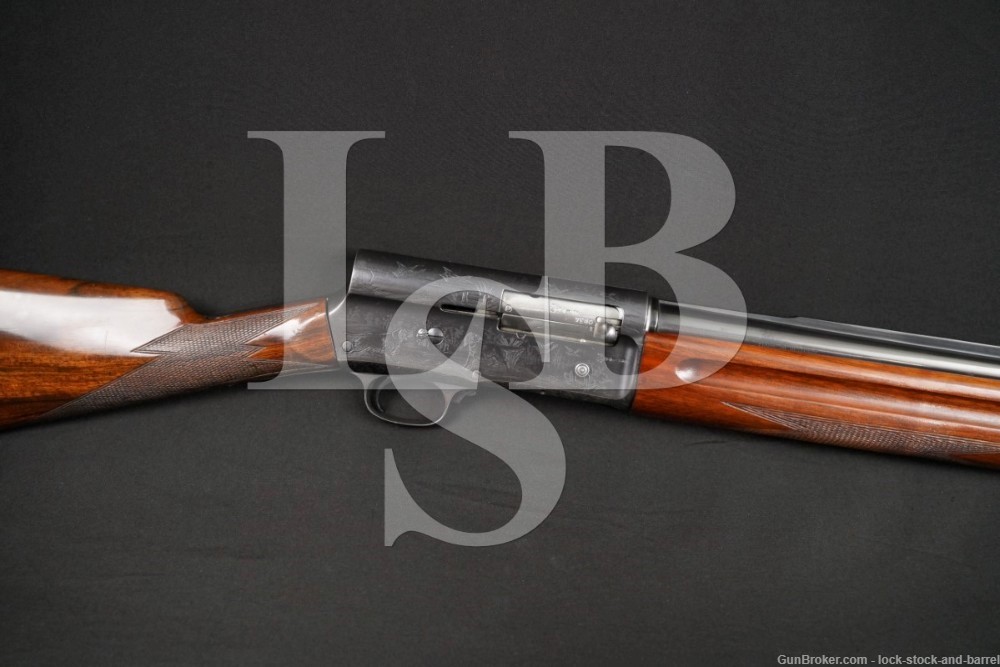 Make: Made by FN in Belgium for Browning

Stock Configuration & Condition: The stocks are two-piece checkered walnut with finger-grooved forend, straight wrist, monte carlo comb with cheekpiece and ventilated orange rubber Hawkins recoil pad. The stocks have scattered light nicks, scuffs and scratches, more in the buttstock than the forend. There are two short cracks at the rear of the top tang and three thin cracks right next to each other at the left-rear of the bottom tang. The checkering is well defined. The LOP measures 14″ from the front of the trigger to the back of the recoil pad, 13 1/8″ to the back of the wood. The pad has scattered wear and discoloration but remains fairly supple. Overall, the stocks are in Good-plus condition as not original to the gun.

Bore Condition: The bore is semi-bright. There is some scattered minor erosion in the bore.

Overall Condition: This shotgun retains approximately 94% of its metal finish. The finish is thinning at all edges. There is some scattered minor wear and faint surface oxidation in the receiver, most notable in the tangs. There is a spot of wear at the muzzle. There are a few other scattered minor marks. The action shows minor operational wear. The screw heads range from sharp to tool marked with strong slots. The markings are clear. Overall, this shotgun is in Very Good-Fine condition.

Browning would eventually license the design to FN in Europe and later to Remington for their Model 11 and to Savage Arms for their Models 720 and 755. These designs went on to be a great commercial success, the first truly successful autoloading shotgun. This example is a 1929 vintage high-grade gun with an early FN Type IV engraving pattern having bird and dog hunting scenes on each side. The gun looks like it has served its previous owners well with light wear in the metal and a little more in its replacement stocks. Whether you’re looking to add to your Browning collection or want a classy 16 gauge field gun, this will be a nice addition to any safe in America. Please see our photos and good luck!