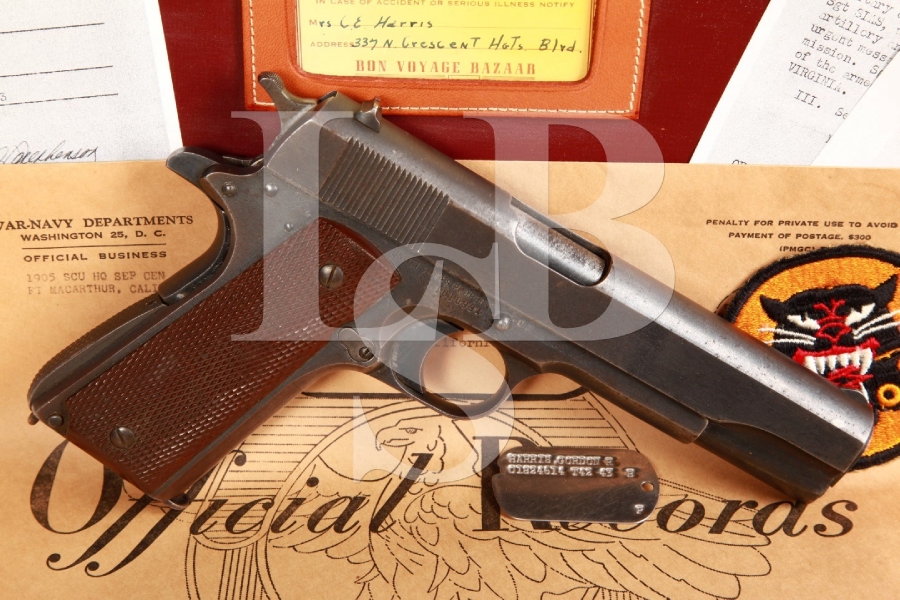 SOLD FOR: $1,555
LSB#: 141229FP04
Make: Manufactured by Remington Rand
Model: 1911-A1
Serial Number: 1010994
Year of Manufacture: 1943 (Pg. 394 of Clawson’s “Colt .45 Service Pistols”)
Caliber: .45 ACP
Action Type: Single Action, Semi-Automatic with Removable Magazine
Markings: The left side of the slide is marked “REMINGTON RAND INC. / SYRACUSE, N.Y. U.S.A.” The left side of the frame below the slide release is marked “FJA” and behind the magazine release with “P”. The “FJA” stands for Lt. Col. Frank J. Atwood, US inspector of M1911A1 .45 Auto Pistols Made By Ithaca, Union Switch & Signal and Remington Rand; the “P” is an acceptance proof. The right side of the frame is marked “UNITED STATES PROPERTY / NO.1010994” and “M1911 A1 U.S. ARMY”. The rear face of the slide (under the firing pin stop) is marked “A”. The top of the frame in front of the hammer is marked with a “G”. The top of the slide in front of the rear sight is marked “P”. The left side of the lug on the barrel is marked with an “S” and “P”, indicating it is a pre-WWII barrel made by Springfield Armory.
Barrel Length: 5”
Sights / Optics: The front sight is a short ramped blade fixed to the slide. The rear sight is a square notch dovetail set to the slide.
Stock Configuration & Condition: The grips are checkered reddish brown plastic. The left grip checkering is sharp with a slight mar in the center. The right grip checkering shows light wear with a large spot of moderate to heavy wear in the center and heavy wear along its bottom edge. The grips rate in about Fine overall condition.
Type of Finish: The finish is the black oxide “blue” Remington used over a sand blasted finish. The mainspring housing is checkered.
Finish Originality: The finish is original.
Bore Condition: The bore is bright, turning to gray in the grooves. The rifling is sharp. There is frosting in the grooves at the muzzle.
Overall Condition: This pistol retains about 80% of its metal finish. The right side of the slide and frame is sprinkled with light pinprick surface erosion. There is thinning on the edges of the slide, frame, safety and slide release, on the underside of the slide and frame, and on the front strap. The front strap shows a few compression marks and numerous light handling marks. There are also a few compression marks on the bottom right edge of the frame above the trigger, a spot of thinning on the right side of the frame and marks through the finish on the left side of the frame below the slide release. The hammer checkering shows light wear and the checkering on the backstrap shows moderate wear along its edges. The slide and slide release serrations are sharp. The checkering on the recoil spring plug shows light wear. The grip screws are sharp and the markings are clear. Overall, this pistol rates in about Very Good to Fine condition.
Mechanics: The trigger pull is a light and crisp. The slide is tight on the frame. The action functions correctly. We have not fired this pistol.
Box, Paperwork & Accessories: This pistol comes with one blued magazine. It shows minor wear. The floorplate shows light handling marks and thinning on its front edge. The magazine is in about Fine condition. The pistol also comes with a leather notebook full of paperwork, including a signed letter from our consignor that this pistol once belonged to Army 1st Lt. Raymond Gordon Harris, who evidently kept the service pistol issued to him and that he carried during the war. The papers show he served in the 811th Tank Destroyer Battalion in Germany in 1945, and earned a Bronze Star Medal with Oak Leaf Cluster (showing the second award of the medal) on April 15, 1945. He entered the active duty on March 25, 1943 as a 2nd Lieutenant and his Reserve appointment as a 1st Lt. was terminated on April 1, 1953. Included with the paperwork is a cloth unit shoulder patch from the 811th Tank Destroyer Battalion and one of Lt. Harris’s dog tags.
Our Assessment: > The 1911 and 1911-A1 pistols served the military of the United States from 1911 to 1985, through both World Wars and the Korean and Vietnam wars. They gained a reputation as a reliable handgun with plenty of stopping power and are held in high regard by those who have used them. This is a WWII manufactured 1911A1 pistol made by a Remington Rand with a Springfield Armory barrel (Springfield Armory, Colt and High Standard all supplied barrels to Remington Rand in 1943). The barrel is pre-WWII, but the pistol was made in 1943 in time to be issued to Lt. Harris, probably after he graduated Tank Destroyer schooling. The pistol is in Very Good to Fine condition with about 80% of its original finish remaining. There is a sprinkling of pinprick surface erosion on the right side of the slide and frame, with thinning on the underside of the slide and frame, on the front strap and along the edges of the slide and frame. This will make a great addition to a 1911-A1 collection or collection of WWII weaponry. It isn’t every day that you find a “bringback” 1911A1 from a Bronze Star with Oak Leaf Cluster recipient in such nice condition. Supplied with the paperwork on Lt. Harris’s service are one of his dog tags and a cloth unit shoulder patch from the 811th Tank Destroyer Battalion.