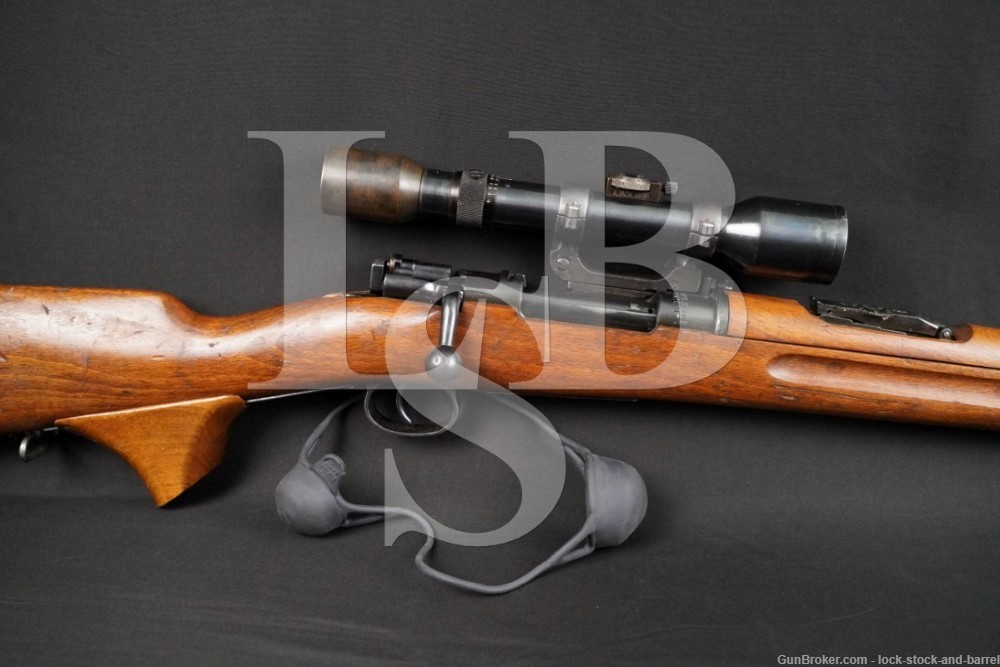 Sights/ Optics: There is a blade dovetailed to a banded base with an attached protective hood. The rear sight is a SM Sikte sight adjustable to 600 meters. There is a scope attached to a mount on the left side of the receiver. The scope is a Model 1941 AGA type which features a German style reticle. The scope’s glass is clear and the reticle is sharp. The scope has some light handling marks. Notably, the ocular lens has a brownish discoloration. Overall, the scope is in Very Good condition.

Stock Configuration & Condition/ Grip: The stock is wood featuring a metal nose-cap, a provision in the forend for a cleaning rod, a barrel band with fixed sling swivel, a handguard, forend finger grooves, a straight wrist, a detachable pistol grip attachment fixed to the bottom tang, a sling swivel fixed to the belly, a straight comb and metal butt-plate. The stock has some light handling marks, nicks and scuffs. Notably, there is a light crack which originates at the rear end of the left finger groove and extends onto the forend, a few light-moderate nicks on the left side of the forend above the magazine, a few light dings on the right side of the butt where it meets the butt-plate, two light scratches on the right side just ahead of the provision for the bolt’s handle (they are no cracks) and some light wear under the right finger groove. The LOP is 14” from the trigger to the rear end of the butt-plate. The butt-plate is coated in some scattered patches of light surface oxidation and has some light handling wear. Overall, the stock is in Very Good condition.

Overall Condition: The rifle retains about 75% of its metal finish. There are light handling marks, nicks and scuffs. Notably, there is light finish loss around the muzzle and front sight’s leading edges, there are some oil stains concentrated around the action and some scattered patches of light surface oxidation visible where the finish has worn off. The markings remain clear. The screwheads are lightly tooled and remain serviceable. Overall, the rifle is in Very Good condition.

Our Assessment: Sweden adopted the Remington Rolling Block for its military in the late 1860s and it was only replaced in 1893 when the Nordic nation adopted the Mauser. There are a few variants of the Swedish Mauser which remained in production from 1893 until 1948. While the small country managed to avoid direct involvement in both World Wars, it developed robust military capabilities to deter a potential invasion from its belligerent neighbors.

This particular Swedish Mauser is a Model 1896 Rifle which was made at the Carl Gustafs Stads Gevarsfaktori in 1912 and it was eventually upgraded into a sniper variant. The gun has target sights and a scope in addition to a detachable pistol grip all designed for superior marksmanship. The gun has some light wear consistent with an older rifle, but it remains well preserved and is mechanically sound. This is a great option for historical firearms enthusiasts. Good luck on your bid!