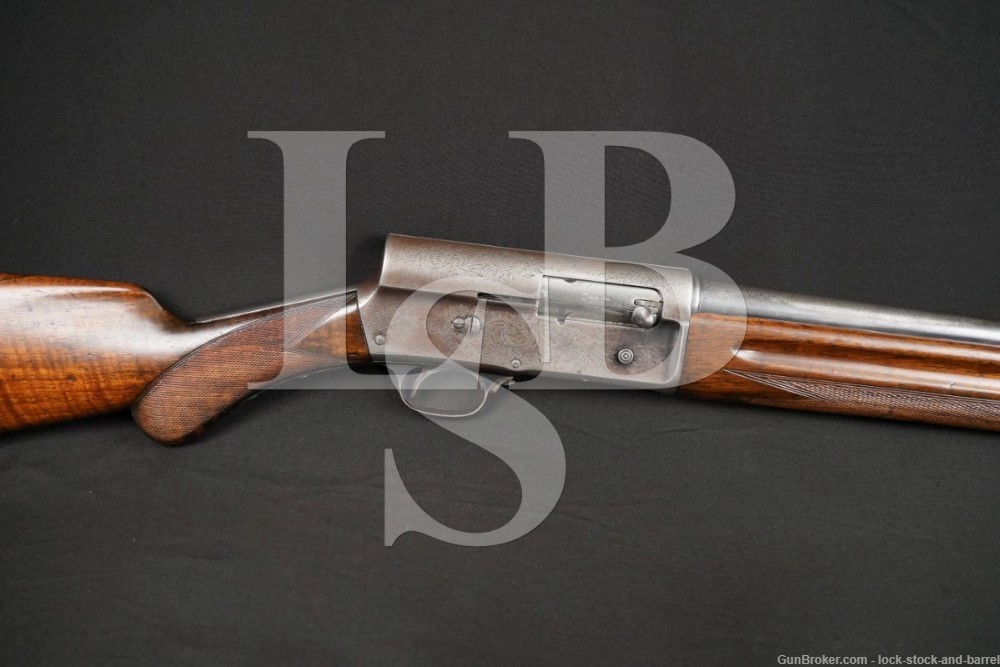 Sights / Optics: There is a silver-colored bead in a base fixed to the front of the barrel. The top of the receiver has a sighting plane which is serrated for glare reduction.

Stock Configuration & Condition: The stocks are two-piece checkered walnut with finger-grooved forend, semi-pistol grip, straight comb with European-style cheekpiece, serrated horn FN buttplate and a sling swivel in the belly (there is another swivel mounted to the front of the magazine cap). The stocks have some scattered light nicks, scratches and general light handling wear. The forend has a loss on the inside edge at the top-right-front and a repaired crack at the rear edge on the bottom-right. The buttstock has a couple of more notable dings in the wrist, one on the left-front and another on the front of the grip behind the bottom tang. There are a couple of short cracks and minor losses around the rear edge of the top tang. The checkering is well defined. The LOP measures 14 1/4″ from the front of the trigger to the back of the buttplate. The plate has light-moderate wear with some worm holes and flaking. Overall, the stocks are in Good-pus condition.

Overall Condition: This shotgun retains approximately 15% of its metal finish. Finish remains in protected areas such as around raised features and along the edges of the forend. Other areas have mostly worn to white or gone to a light patina. There are some scattered light nicks and scuffs. The action shows operational wear. The screw heads range from sharp to tool marked with strong slots. The markings are clear. Overall, this shotgun is in Good condition.

Browning would eventually license the design to FN in Europe and later to Remington for their Model 11 and to Savage Arms for their Models 720 and 755. These designs went on to be a great commercial success, the first truly successful autoloading shotgun. While Browning received all of FN’s production to be sold in North America and was able to license production to other North American companies, FN also licensed the design to sell under their own name in other world markets. This is an example of an FN made gun marked for sale outside North America, and it is a fairly early gun, a 16 gauge made in 1913. It is a high-grade gun with an early FN Type III engraving pattern. The gun looks like it has served its previous owners well over the last century, with honest wear consistent with its age. The bolt assembly has been replaced, but other serialized parts match and the gun retains a good bore and strong mechanics. Whether you’re looking to add to your Browning collection or want a classy 16 gauge field gun, this will be a nice addition to any safe in America. Please see our photos and good luck!