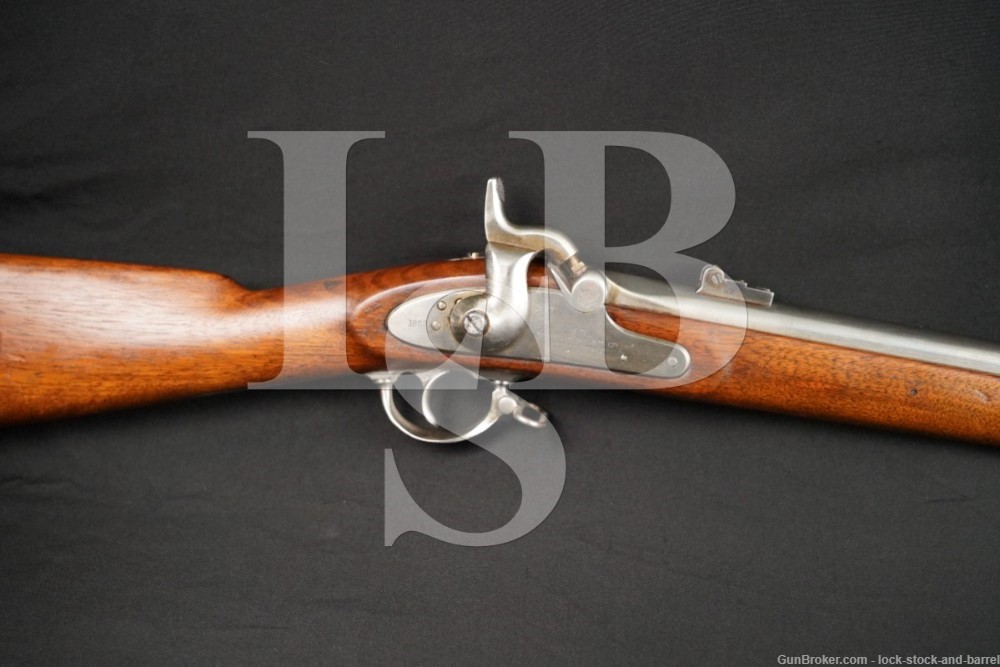 Stock Configuration & Condition/ Grip: The refinished wood stock features a metal nose cap, a slot in the forend for the included ramrod, a total of three barrel bands (the center barrel band has a fixed sling swivel), a sling swivel fixed to the front of the trigger guard, a straight wrist, a straight comb and a semi-crescent butt-plate. The stocks have only a few light handling marks, nicks and scuffs. The LOP is 13.5” from the trigger to the rear end of the butt-plate. The butt-plate has some light surface oxidation and light handling marks. Overall, the stock is in Fine condition for an Antique.

Type of Finish: Bright with a Blued rear sight

Bore Condition: The bore is semi bright with faded rifling. There is some light-moderate erosion concentrated in the grooves.

Overall Condition: The gun has no metal finish. The blued rear sight has had most of its finish wear off. Otherwise, there are some light handling marks, nicks and scuffs on the gun’s metal surfaces. Notably, there are few scattered patches of light surface oxidation in addition to some oil stains concentrated on the hammer and nipple. The markings remain clear. The screwheads are only lightly tooled and remain serviceable. Overall, the gun is in Fine condition for an Antique.

Mechanics: The action functions correctly. We have not fired this muzzleloader. As with all used firearms, a thorough cleaning may be necessary to meet your maintenance requirements.

Box Paperwork and Accessories: There is a ramrod included with the rifle-musket marked “K”. The ramrod has only light handling marks and remains in Fine condition.

Despite some superficial handling wear and oxidation, this specimen is well preserved with crisp markings and it remains mechanically sound. This is a great example of a Civil War weapon system that the ordinary foot soldiers on both sides of the conflict marched into battle with. The gun should appeal to Civil War history aficionados and fans of Colt. Good luck on your bid!