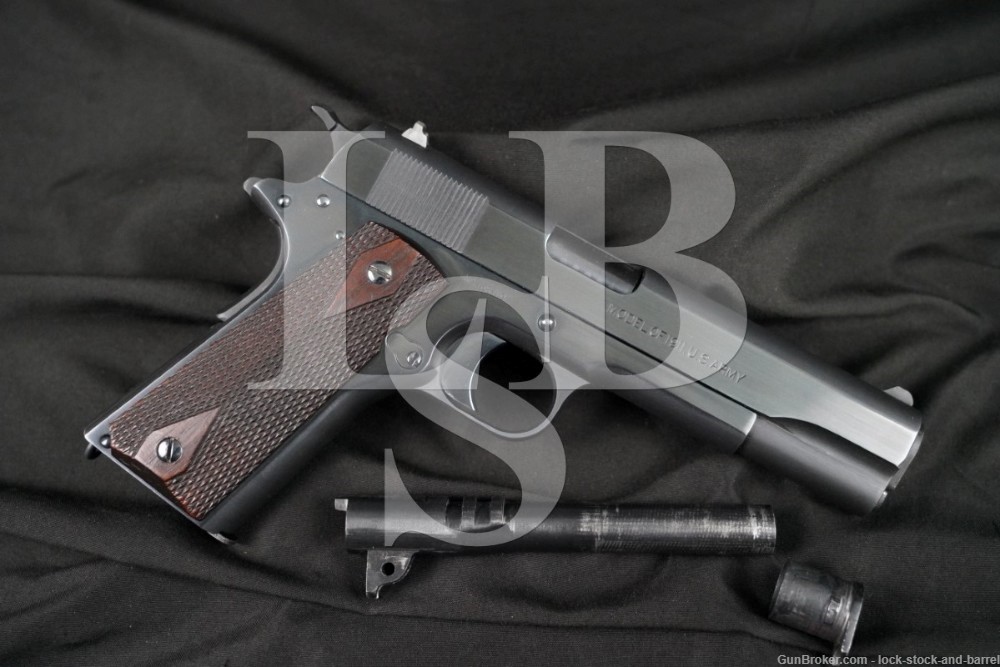 Sights / Optics: The front sight is a blade with a recessed circle fixed to the front of the slide. The rear sight is a square notch dovetailed to the rear of the slide, finished in the white. The sights are not original to the pistol.

Stock Configuration & Condition: The grips are two-piece checkered walnut with smooth diamonds around the grip screws. The grips have light handling wear with a few light nicks and scuffs. The checkering is generally well defined. There are no chips or cracks. Overall, the grips are in Very Good-Fine condition.

Bore Condition: The installed barrel’s chrome-lined bore is bright, the rifling is sharp. There is no erosion in the bore. The additional barrel’s bore is gray with sharp rifling. The bore has scattered light erosion with some more notable erosion in the grooves along the edges of the lands.

Overall Condition: This pistol retains about 97% of its metal finish. The finish is generally strong throughout. There are a few scattered small marks, most under the finish. The safety notch on the left-rear of the slide appears to have been repaired before the finish was applied. The action shows light operational wear, mostly on the barrel. There are a few spots of very minor erosion under the finish and there is some minor dishing around the pin holes. The screw heads range from sharp to tool marked with strong slots. The markings are clear. Overall, this pistol is in about Fine condition as refinished.

Box, Paperwork & Accessories: This pistol comes with a single 7-round two-tone magazine with the top finished in the white, the additional barrel as described above and an additional barrel bushing. The magazine has light operational wear, some moderate erosion at the heel of the floorplate and bottom of the spine, intact feed lips and a strong spring.

Our Assessment: The 1911 and 1911-A1 pistols served the military of the United States from 1911 to 1985, through two World Wars and the Korean and Vietnam wars. They gained a reputation as a reliable handgun with plenty of stopping power, and are held in high regard by those who have used them. The design was the end-result of a series of developments by famous gun designer John Browning, starting with the Model 1900. The advances made by Browning were revolutionary at the time, and were so successful that they are considered commonplace today. Browning not only developed first a pivoting and then a tilting barrel to allow for a locked system, he developed the concept of “the slide”, which is now synonymous with semi-automatic handguns. This is a U. S. Government marked Colt 1911 pistol made toward the end of WWI in 1918. The pistol has been refinished, so it looks great for its age, and must have been in good shape when the new finish was applied as the markings are still in good condition, though the safety notch did need a repair at some point. The pistol is equipped with a more recent, chrome-lined barrel but a WWI-era barrel is included, as well. This is a neat example of the U.S. Model of 1911 which will add to your collection, but will also make for a fun shooter. Please see our photos and good luck!