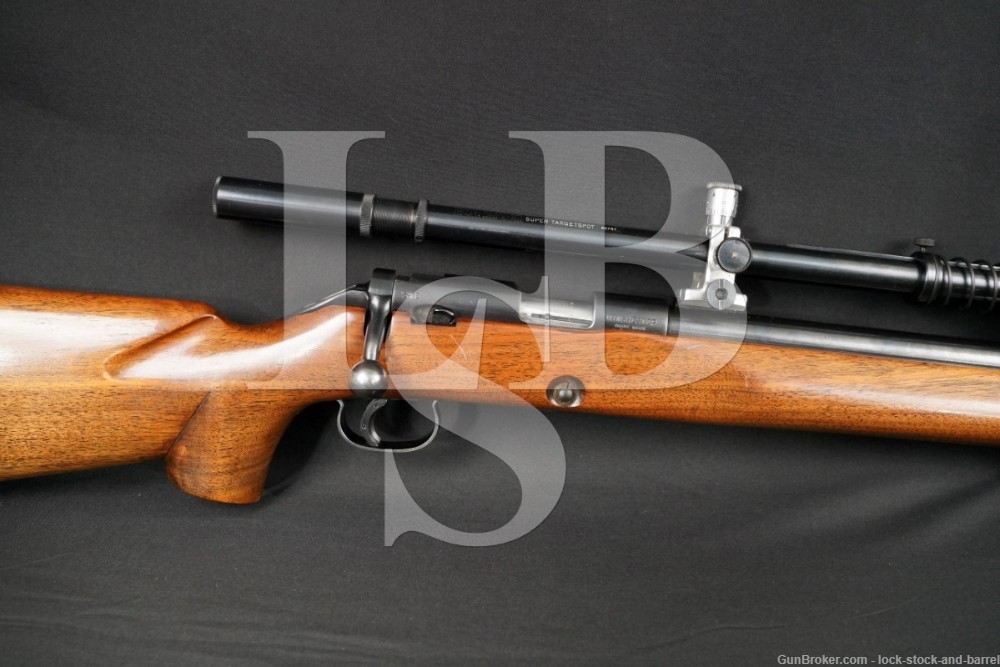 Sights / Optics: The front sight has been removed and replaced with a blank dovetail. Equipped to the top of the barrel at the rear is a Lyman Super Targetspot 30x scope with a dot and crosshair reticle. The scope shows scattered light marks on the external surfaces. The lenses are clear and the original lens caps are included. The scope rates in about Fine overall condition. The left side of the receiver has two drilled, tapped, and filled holes for a side mounted optic (not included).

Stock Configuration & Condition: The stock is nicely finished smooth wood with a beavertail forend, pistol grip, straight comb, and a checkered steel butt plate. There is a rail in the forearm, two forward sling swivels and a rear sling swivel. There are scattered marks and dings with some slightly more notable scratches on the right side of the forend. The LOP measures 13 1/2? from the trigger to the rear of the butt plate, which shows some light thinning along the edges. The stocks rate in about Fine overall condition.

Bore Condition: The bore is bright and the rifling is sharp. There is no pitting or erosion.

Overall Condition: This gun retains about 95% of its metal finish. There is some marking and spots of finish loss on the lower metal. The barrel and receiver show only very light scattered marks. Even the bolt handle shows the majority of its original finish. The screw heads are lightly distressed. The markings are crisp. Overall, this gun rates in about Fine condition.

Mechanics: The action functions correctly. The trigger is light and crisp. We have not fired this rifle. As with all previously owned firearms, a thorough cleaning may be necessary to meet your maintenance standards.

Box, Paperwork & Accessories: The previously mentioned scope and one 5-round magazine.

Our Assessment: “The Winchester Model 52 is a bolt-action .22-caliber target rifle introduced by the Winchester Repeating Arms Company in 1920. For many years it was the premier small bore match rifle in the United States, if not the world. Known as the “King of the .22’s,” the Model 52 has been called by Winchester historian Herbert Houze “perfection in design.” However, by the 1970s the World War I-era design was showing its age and had given way in top-level competition to newer match rifles from Walther and Anschütz; and the costly-to-produce Model 52, which had been a loss-leader prestige product for some time, was finally discontinued when US Repeating Arms took over Winchester in 1980”. We couldn’t have said it better ourselves, and though no longer made, many still consider the Model 52 the best .22 target rifle ever made. An even hotter addition is the vintage Lyman Super Targetspot scope that this beauty comes equipped with. Please see our photos and good luck!