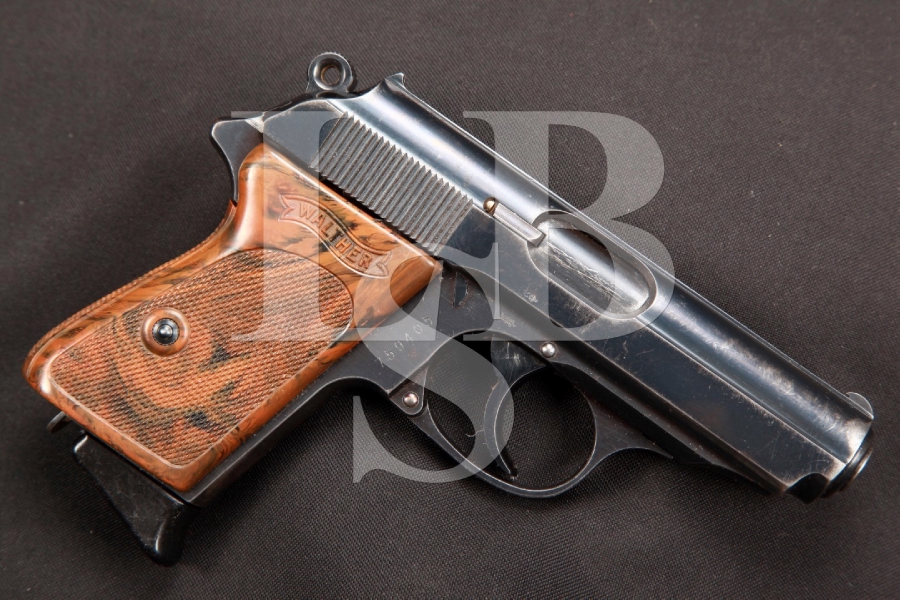 SOLD FOR: $2,172.00
LSB#: 150209CP01
Make: Walther
Model: PPK
Serial Number: 759405
Year of Manufacture: 1930-1939
Caliber: .32 ACP (7.65mm Browning)
Action Type: Traditional Double Action Semi-Automatic (DA/SA) with 7-Round Removable Magazine
Markings: The left side of the slide is marked with the Walther “Banner” logo, “Waffenfabrik Walther Zella-Mehlis (Thur) / Walther’s Patent Cal. 7,65m/m” and “MOD. PPK”. The right side of the slide below the ejection port opening and the right side of the frame just below it are marked with a Crowned “N” proof as used prior to 1940. The right side of the frame behind the trigger is marked “759405”.
Barrel Length: 3 ¼”
Sights / Optics: The front sight is a low profile blade fixed to the slide. The rear sight is a flat topped “U” groove in the top rear of the slide. The top of the slide has a full length rib which is serrated to reduce glare.
Stock Configuration & Condition: The one piece grip is a checkered brown plastic with streaks of black running through it that encloses the backstrap. There is a Walther Banner logo at the top of the grip on each side. The smooth edges of the grips show a few light handling marks as well as a few small compression marks. The checkering is sharp but there are two sharp compression marks in the lower half of the checkering on the left side. Otherwise, the checkering is without mars. The grip rates in about Fine condition.
Type of Finish: Blue
Finish Originality: All Original
Bore Condition: The bore is bright and the rifling is sharp. There is no erosion. However, there is a large divot on the right side about 1” from the muzzle where the bore has been ground out, rifling and all. This spot corresponds to five very deep compression marks on the outside of the barrel.
Overall Condition: This handgun retains about 88% of its metal finish. There is surface loss on the front edges of the slide and thinning on the side and rear edges of the slide and the frame. There is also thinning near the bottom of the front strap. The slide and frame also show light handling marks with a few scratches in the barrel that is exposed at the ejection port. There are three compression marks on the back of the slide at the edge of the hammer opening and another on the left rear edge of the slide. There are also three tiny marks in the safety and a few tiny marks around the front edge of the grip on the left side of the frame. The hammer and safety serrations are sharp, as is the checkering on the magazine release. The grips screw is sharp but with slight marks from a screwdriver and the markings are clear. Overall, this handgun rates in about Fine condition.
Mechanics: The action functions correctly. This pistol has a slide mounted safety (not decocker) that blocks the hammer and a magazine release mounted on the left side of the frame. The double action trigger pull is a little stiff and the single action pull is light and crisp. This pistol was not designed with a magazine disconnect.The slide does lock back on an empty chamber. We did not fire this handgun.
Box, Paperwork & Accessories: This pistol comes with one 7-round blued factory magazine with a black plastic finger extension floorplate. The magazine is marked on the lower left side with the Walther Banner logo. The magazine shows thinning on its front and side surfaces and three spots of surface loss on its rear surface. It is in about Fine overall condition.
Our Assessment: This Walther Model PPK was made in in the late 1930s before Germany changed their proof marks to an Eagle over“N” from the old Crown over“N”. The PP stood for “Polizei Pistole Kriminalmodell” (Police Pistol Detective Model) and was used by the German police detectives (street cops carried the larger PP chambered in .380 ACP.) The PPK Model was also very popular in the civilian market. Adolf Hitler committed suicide with a PPK and a PPK was used by the fictional character James Bond after “M” made him trade-in skeletonized Beretta. The pre-war pistols are considered more collectible than any other period except possibly for those made during the war, and the quality and workmanship on these pistols is outstanding. This pistol is in Fine condition with about 88% of its original finish remaining. It shows surface loss on the front of the side and thinning on the edges of the slide and frame, with several handling marks, mostly in the slide. The grip has sharp checkering but with two sharp compression marks at its lower rear. The bore is bright with sharp rifling, but there is a divot ground out of the bore in an attempt to repair the damage from some deep compression marks on the right side of the barrel 1” from the muzzle. This pistol has a hammer blocking safety, but no decocker. It is possible that the gun was made without a decocker, which would make it extremely rare.It is also possible that someone just got tired of being nervous having the hammer fall every time they went to put the safety on and disabled the decocker. Either way, this is a very collectible pistol and is sure to end up in a collection of pre-war automatics.