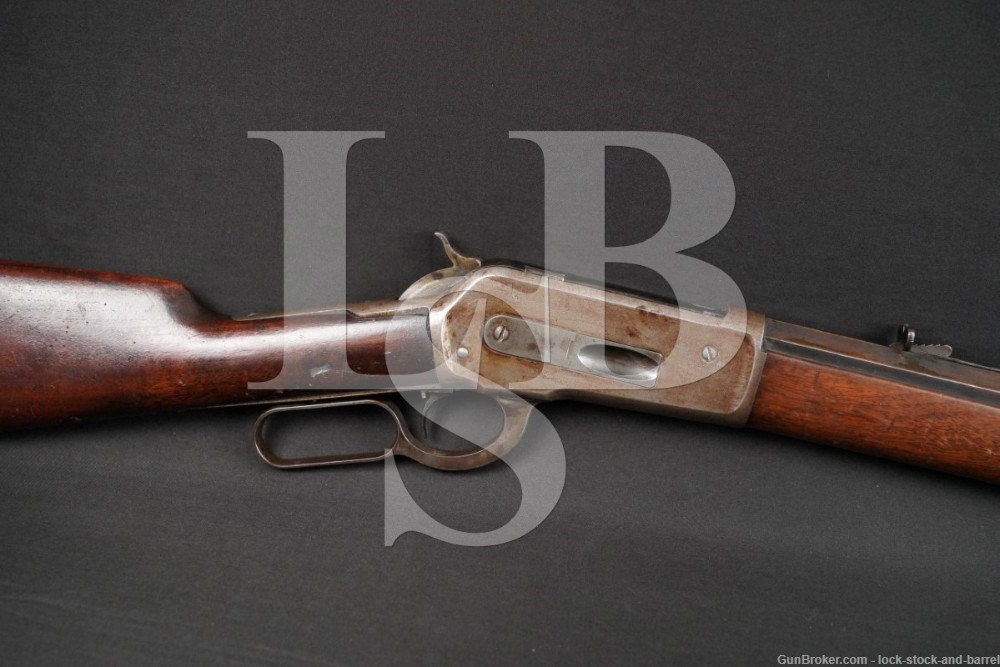 Barrel Length: The octagonal barrel has been cut to 20 3/4″.

Stock Configuration & Condition: The stocks are two-piece smooth walnut with capped forend, straight grip, straight comb and steel carbine-style buttplate. The stocks have scattered nicks, dings, scuffs and scratches. Most are light with a couple of more notable dings in the left-rear of the forend, a more notable scratch on the left of the buttstock toward the rear, a gouge in the right of the wrist and four holes arranged in a square in the right-rear of the buttstock as though something was mounted there. There is a small crack in the right-rear of the buttstock and some losses around the front edges of the wrist. The wrist and the bottom-rear of the forend show sanding. The LOP measures 12 3/4? from the front of the trigger to the back of the buttplate. The plate has worn to white with some scattered discoloration from oxidation and minor erosion. Given the carbine-style buttplate and the original barrel length having been longer, it is likely that the buttstock is not original to the gun. Overall, the stocks are in about Good condition as refinished Antique.

Bore Condition: The bore is gray. The rifling is worn, but visible. There is scattered light erosion and pitting in the bore.

Overall Condition: The rifle retains approximately 35% of its metal finish. The finish is thinning at all edges. Most of the remaining finish is in the barrel, mottled with wear and areas gone to a light patina. The bolt has generally strong finish and there is some finish along the top of the magazine tube. Other areas have mostly worn to white or gone to a light patina. There are heavy tool marks around the magazine bracket dovetail. There are some spots on the receiver which appear nickeled, somewhat common for Winchester’s case hardened receivers. There is scattered light surface oxidation and the barrel has scattered residue from the stock finish. There is some stock finish residue on the receiver around the wrist. There are some light nicks, scuffs and scratches. The action shows operational wear. The screw heads range from sharp to disfigured with questionably useable slots. The markings range from clear to worn, but legible. Overall, this rifle is in Good-Very Good condition as Antique.

Mechanics: The action functions correctly and smoothly. We did not fire this rifle. As with all used firearms, a thorough cleaning may be necessary to meet your maintenance standards.

Our Assessment: The 1886 is another of John Browning’s industry-changing designs. It is our favorite Winchester here, certainly the strongest built at the time and function leads to beauty. The 1886 was available in a variety of cartridges over its nearly 40 years of production and, while there were standard configurations, there were also special-order features which led to a wide number of variations available to the collector today. This example is a rifle with an octagonal barrel chambered for the .45-90 Winchester Center Fire cartridge. The barrel has been cut back to 20 3/4″ and the carbine-style buttstock brings this rifle fairly close to a Carbine configuration while still being chambered for a quite potent cartridge. This rifle is in Good-Very Good condition, with its external appearance consistent with its age, but retaining a decent bore and strong mechanics. Altogether, this is a neat example of a Winchester 1886, in nice condition for a 130 year old hunting rifle. It will make a nice addition to a Winchester collection, especially being fairly early in production. Please see our pictures and good luck!