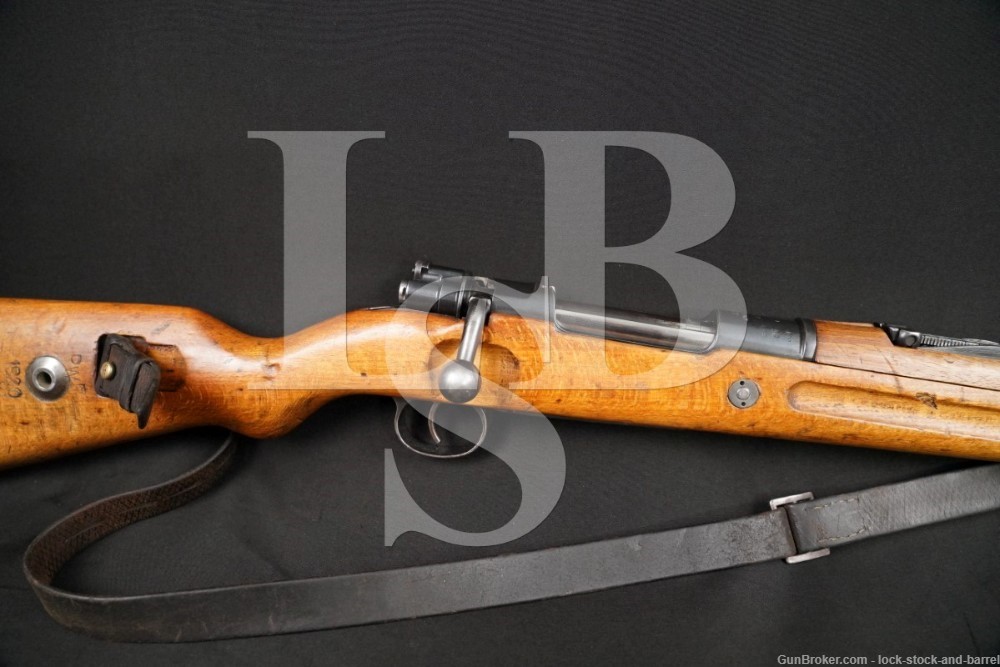 Sights / Optics: The front sight is an inverted “V” post set between two protective ears. The rear sight is a “V” notched blade attached to a sliding escalator assembly marked from “3-20”.

Stock Configuration & Condition: The hardwood stock has a pistol grip, scallop for the bolt handle, nosecap with stacking rod, barrel band with sling bar, through bolt, sling well, sling pass through, and a metal buttplate. The cleaned buttplate shows scratches and surface erosion. The wood shows numerous scrapes, scratches, and compression marks. Most of which have been oiled over. Several of the marks have damaged or removed small portions of the surface wood. The LOP measures 13 inches from the front of the trigger to the back of the buttplate. The stock rates in about Very Good overall condition.

Bore Condition: The muzzle and grooves are gray. The rifling is deep. There is erosion in the bore; more prominent in the grooves. There is a small amount of pitting at the muzzle.

Overall Condition: The metal has been treated with cold blue. This rifle retains about 85% of its current metal finish. The metall shows scrapes, scratches and areas of thinning. Many of the thinned portions of the metal show discoloration from oxidation. The screw heads show use. Most of the markings are deep. Overall, this rifle rates in about Very Good condition.

Box, Paperwork & Accessories: The rifle has a leather sling attached.

Our Assessment: The German Mauser Model 98AZ (98a) Carbine is also known as a Kar 98 (Karabiner 98). It was made back in 1917 at the Erfurt Arsenal so it was around for WWI. This one has seen some use but still has scarce markings on the receiver that include a “1920 double date” on the receiver and stock. For more information on the 98AZ see pages 187-193 of Robert Ball’s book, Mauser Military Rifles of the World 5th Edition.
Here is some info on the “double date” from www.forgottenweapons.com/what-is-the-german-1920-double-date-stamp/: “…the “1920” stamp is not a date, but rather a property mark. When the Treaty of Versailles was being enforced, it restricted the German military to just 100,000 men, and strictly limited the number and types of arms they were allowed to have. At the same time, strict civilian gun control was enforced in an attempt to remove the leftover military arms from the war from Germany. In total, nearly 5 million firearms were collected and destroyed between roughly 1919 and 1921. The 1920 stamp on guns indicated formal (and legal) German military ownership of a particular weapon. This made it accountable to the Inter-Allied Military Control Commission (to the extent that they tabulated such things) and also made the gun easily identifiable if it were stolen from a military unit”.