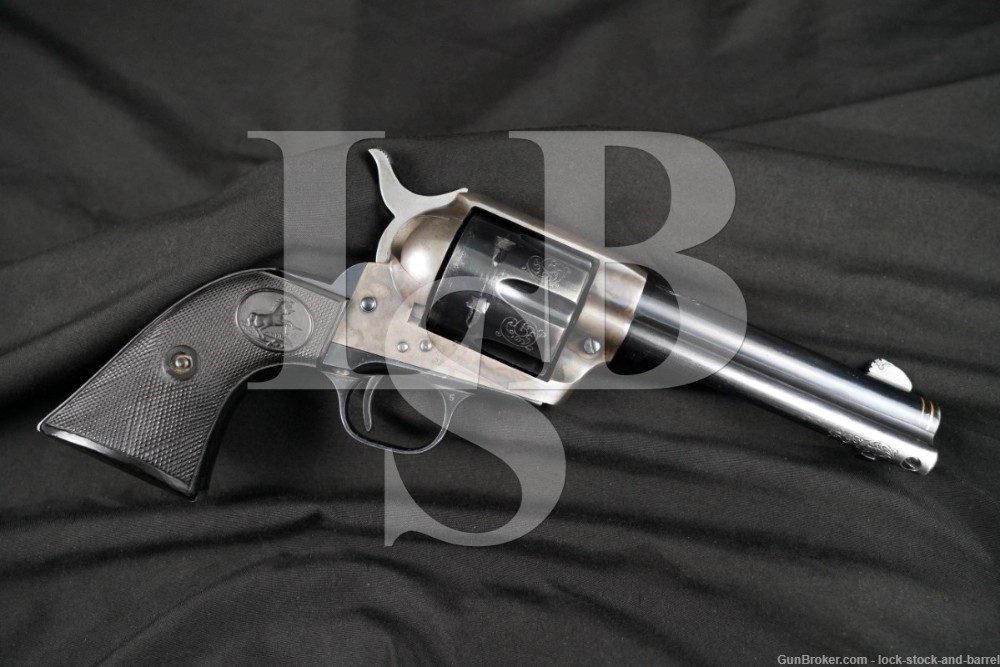 Sights / Optics: The front sight is a quarter-round blade fixed to the front of the barrel. The rear face of the blade has had four notches cut in it. The rear sight is a square notch at the rear of a groove in the top strap.

Stock Configuration & Condition: The grips are two-piece checkered black hard rubber with rampant colts in ovals at their tops. The exterior of the grips have scattered light wear with a portion of the checkering re-cut on the left panel. There are rough fitting marks on the bottom edges of the grips and some tiny losses along their rear edges. The checkering is generally well defined with pretty good detail in the rampant colts. There are no external chips or cracks, but there are repairs at the grip screw escutcheons on the inside of both panels. Overall, the grips are in about Good condition as repaired, but appear Very Good when installed.

Finish Originality: The frame’s finish appears Original, the engraved parts have been refinished.

Overall Condition: This revolver retains about 85% of its metal finish. The finish is thinning at all edges. The barrel has finish wear at the muzzle on the left and there is wear along the ejector housing. The frame has generally strong color with wear on the recoil shield and loading gate. The backstrap is mostly worn to white with finish at at the top. The trigger guard has wear at the bottom-front. The cylinder has scattered wear. There are some light nicks, scuffs and minor surface oxidation. The action shows operational wear. The screw heads range from sharp to tool marked with strong slots. The markings are clear. Overall, this revolver is in about Very Good condition.

Mechanics: The action functions correctly. The mainspring has been lightened, resulting in a light, smooth hammer pull. Lockup produces very little play side-to-side and minor end-shake on all six chambers. The trigger is crisp. The cylinder’s bushing is separate from the cylinder. We did not fire this revolver. As with all used firearms, a thorough cleaning may be necessary to meet your maintenance standards.

Our Assessment: The Colt Single Action Army is perhaps the quintessential old west handgun, produced for more than a century, serving the U.S. Army as its sidearm from 1873 into the first world war and captivating audiences on the silver screen. The SAA was discontinued by Colt as it tooled up to provide for the WWII war effort, and it was thought by Colt that the design was obsolete, swing-out cylinder revolvers had been around for half a century and autoloaders were gaining in popularity. Then, with the advent of television and western programs such as Hopalong Cassidy, The Lone Ranger, The Cisco Kid, and The Gene Autry Show, American interest in the guns that won the west was reborn. In 1956, Colt reintroduced the Single Action Army, this new production run now referred to as the 2nd Generation SAA’s. This example is from fairly early in the 2nd generation, 1958, and is chambered for the .38 Special cartridge. In Very Good condition, the revolver shows signs of use, but retains a great bore and strong mechanics. It has had some decorative engraving applied and the mainspring has been lightened to smooth out the hammer pull. This would make a neat addition to a Colt collection as one of the earlier second generations, but it will also make for a fun shooter. Please see our photos and good luck!