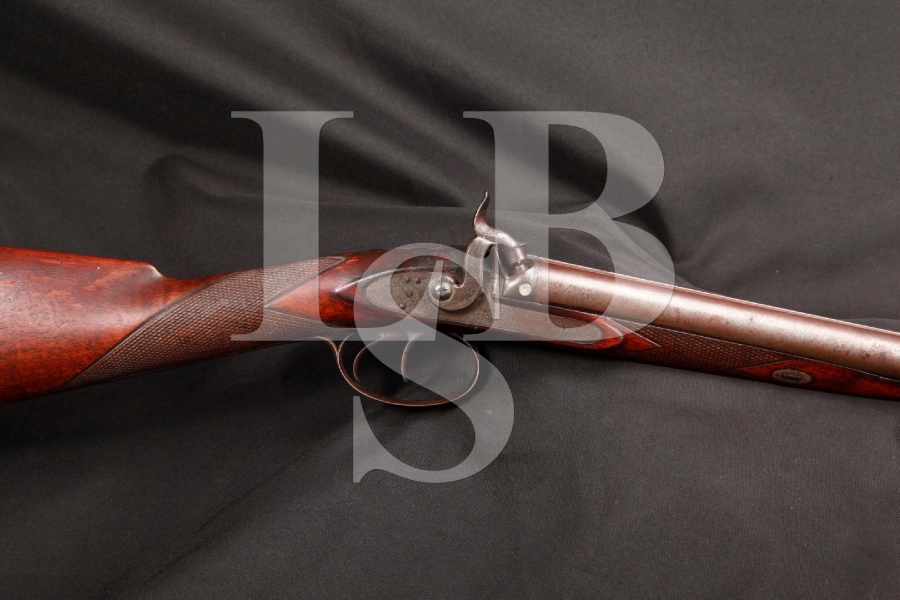 LSB#: 150211GT01
Make: Westley Richards, England
Model: Double Barrel Muzzle Loading Shotgun
Serial Number: 6432
Year of Manufacture: 1850’s
Gauge: 16
Action Type: Muzzle Loading Percussion Double Barrel Shotgun
Markings: The barrel rib is marked “Westley Richards 170 New Bond STLondon”. The lock plates are marked “Westley Richards” and the bottom tang is marked “6432”.
Barrel Length: The barrels are 29 3/8” in length.
Choke: Neither barrel is choked (i.e. Cylinder). The diameter of the bores is about 0.665”.
Sights / Optics: This shotgun is mounted with a small brass bead at the front of the barrel rib.
Stock Configuration & Condition: The stock is one piece checkered walnut with a pistol grip and steel shotgun style buttplate. The engraved tang on the buttplate overlaps the comb by several inches and the engraved lower tang runs along the bottom of the grip and belly for 5 ½” behind the trigger guard. There is an engraved silver medallion behind the lower tang and silver escutcheons around the barrel bolt. The forend has steel engraved nose cap that is inlaid into the underside of the forend for 2” and the forward tang on the trigger guard is also engraved and inlaid into the wood for about 2”. The stock shows oil staining over its length, which is heaviest around the metal parts. There are numerous dings and light marks in the buttstock area with a deeper compression mark on the left side of the heel and a small chip out of the left top edge of the forend. The checkering shows moderate wear that is tending to heavy wear at the bottom edges of the grip checkering. The grip and forend checkering both show a few light mars. The LOP measures 14 15/16” from the front of the forward trigger and 13 15/16” from the front of the rearward trigger to the back of the buttplate. The upper tang on buttplate is engraved, as are its mounting screws and the buttplate has developed a brown patina with light handling marks and spots of solid erosion. The stock rates in about Very Good to Fine overall condition.
Type of Finish: The barrel was probably blued. The breach, upper tang and the hammers are case colored and are scroll and border engraved. The side plates are also case colored and scroll engraved while the trigger guard and its tangs are blued with scroll and border engraving.
Finish Originality: The finish is original.
Bore Condition: The bores are dark with light erosion.
Overall Condition: This shotgun retains about 3% of its metal finish. The trigger guard still shows traces of its blued finish. The metal parts are all developing a brown patina and most areas except the trigger guard, its front tang and the nose cap, show light surface erosion. There are a few light marks in the barrel, the trigger guard and its rear tang. The screw heads are sharp and engraved. The markings are clear. Overall, this shotgun rates in about Very Good condition.
Mechanics: The action functions correctly. Both hammers have half-cock safety positions. We have not fired this shotgun.
Box, Paperwork& Accessories: There is a ramrod hung under the barrels with two pipes. It has a brass flared shotgun style tip and the ramrod itself is made of ebony. the brass tip shows tarnish. The ramrod is in about Fine condition.
Our Assessment: Westley Richards is one of the oldest surviving traditional English gun makers. It was founded in 1812 by William Westley Richards. Their inventions included the Anson & Deeley boxlock action and the Droplock, which is equal in in status to James Purdey’s self-opening and Holland & Holland’s removable locks. They were the producers of the Enfield rifles, the British Army standard for many generations. Both William Westley Richards and his son Westley were renowned inventors and gun makers. This is a double barreled, muzzle loading percussion shotgun, probably made in the 1850’s, or early 1860’s at the latest, and comes with a brass tipped ebony ramrod. The barrels are 29 3/8” in length, 14 gauge and cylinder choked. The breech, hammers, forend nose cap and the trigger guard are scroll and border engraved, while the side plates are scroll engraved. Most of the shotgun has developed a brown patina, but there is still bluing left on the trigger guard. This shotgun is in about Very Good condition. We expect this shotgun to end-up in a collection of fine English weaponry of the 1800’s, probably alongside those of Greener and Purdey.