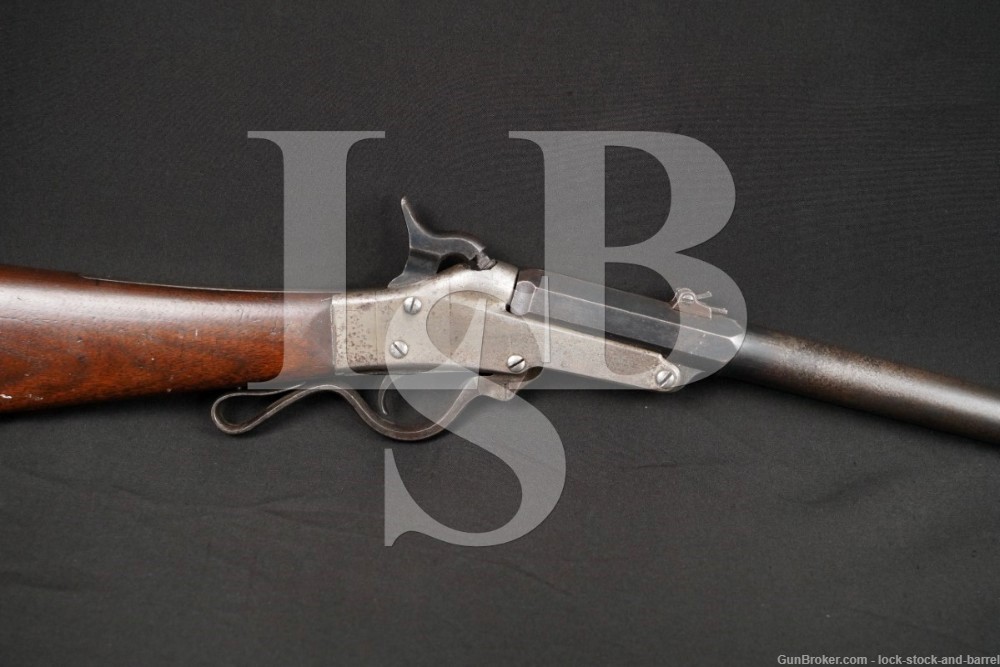 Sights/ Optics: The front sight is a blade dovetailed to the front of the barrel. The rear sight is a folding leaf sight that is dovetailed to the chamber. There are three leaves, each with a “U” notch at the top. The rear leaf and the center leaf pivot together and are set at 90 degrees from each other. The front leaf can be pivoted up or down once the middle leaf is raised.

Stock Configuration & Condition/ Grip: The refinished stock is one-piece wood featuring a sling bar fixed to the left side of the receiver, a straight wrist with finger grooves integral to the lever which rests on the bottom tang, a straight comb and a semi-crescent butt-plate. The stock has light handling marks, nicks and scuffs. Notably, there are some oil stains and white color spots of paint on the right side of the butt. The LOP is 14.5” from the trigger to the rear end of the butt-plate. The butt-plate is coated in moderate oxidation and has some light handling marks. Overall, the stock is in Very Good condition for an Antique

Bore Condition: The bore is semi-bright with mostly sharp rifling. There is erosion concentrated in the grooves.

Overall Condition: The rifle retains 35% of its metal finish. The gun is coated in light-moderate surface oxidation. There are light handling marks, nicks and scuffs. Notably, there is finish loss around the leading edges, there are a few patches of finish loss on the barrel which have taken a patina color from oxidation, the muzzle has some finish loss and the majority of the case coloring has worn off with a few trace patches surviving and the receiver has some light pitting concentrated around the nipple. Also, there is some moderate pitting surrounding the firing pin’s provision. The markings remain clear. The screwheads have toolmarks but they remain serviceable. The markings remain clear. The screwheads are only lightly tooled and remain serviceable. Overall, the rifle is in Very Good condition.

Our Assessment: This is a Maynard Carbine percussion-ignition rifle chambered for .50 caliber cartridges that was manufactured between 1863-1865. This carbine’s story begins with Dr. Edward Maynard. Maynard was an interesting man, he started his adult life by entering the US Military Academy at West Point but due to poor health had to resign after a single semester. He went on to pursue a career in dentistry. Maynard became one of the most successful dentists of his day, but he also moonlighted as a weapons designer, patenting dozens of firearms related patents. He designed a unique percussion ignition system that was used on the Model 1855 Percussion Rifle Musket. While theoretically a sound design, the Maynard Tape Primer System proved unreliable with its paper strips susceptible to moisture. Fortunately, the Model 1855s were able to operate normally with standard percussion caps and worked well enough in the field, in spite of the Maynard system.

Aside from his work on the Model 1855, Maynard also designed a breech loaded carbine for the U.S. Military. Along with the carbine, Maynard also designed a cartridge unique to his weapon system. There were a number of the carbines in storage when the Civil War broke out, and the Federal government only placed a single order for 22,000 of them in 1863. This specimen is one of the post-1863 manufactured carbines. This is evidenced by the lack of a tape-primer system and patchbox which were installed on the earlier carbines.

This Maynard is in its original configuration. The gun’s lever still tips the barrel and the hammer still cocks normally. This carbine was accepted for use in the U.S. military, it has a faded cartouche which indicates as much. This is a significant weapon system that should appeal to fans of Civil War relics and historical firearms. Good luck on your bid!