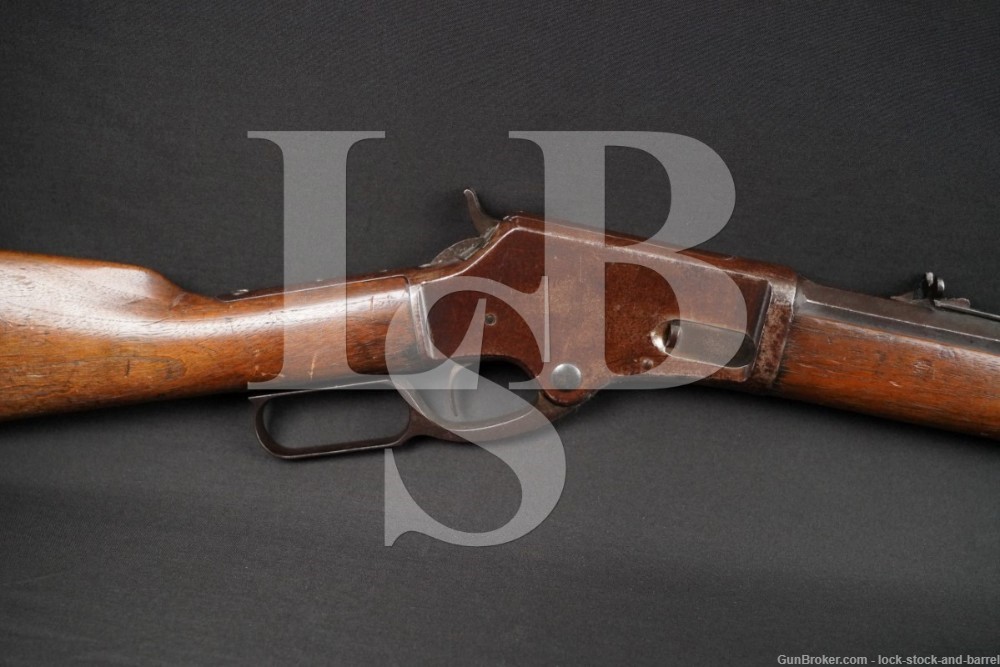 Sights / Optics: The gun is mounted with a dovetail set front blade and a dovetail set, rear semi buckhorn sight, with the elevator present. The upper tang is drilled, tapped, and filled for mounting a tang sight (not included).

Stock Configuration & Condition: The stocks are two-piece smooth wood with a capped forearm, straight grip, straight comb, and a smooth steel buttplate. There is age discoloration where the wood meets the metal, with scattered dings marks, scuffs, gashes, and scratches throughout. The sides of the buttstock show little splits at the rear edges where wood meets metal. The grain lines have become pronounced with age. There is slight play between the forearm and metal. The LOP measures about 13″ from the front of the trigger to back of the buttplate. The stocks rate in about Very Good overall condition as Antique.

Bore Condition: The lands are somewhat bright and the rifling is sharp and deep. There is erosion and pitting in the grooves.

Overall Condition: This gun retains about 10% of its metal finish. The majority of the original finish has turned a deep dark patina. There is finish loss on the leading edges. There are some evenly dispersed nicks, dings and scuffs about the metal. The screw heads are tool-marked with strong slots. The markings are mostly clear, the patent dates on the barrel are a bit difficult to make out. Overall, this gun rates in about Very Good condition as Antique.

Mechanics: The action functions as designed, and feels strong and tight. We did not fired this rifle. As with all previously owned firearms, a thorough cleaning may be necessary to meet your maintenance standards.

Our Assessment: As stated by the National Firearms Museum, “In 1881, the Marlin Firearms Company was incorporated, and production of Ballard rifles continued under the Marlin banner until they were eventually discontinued circa 1891 due to the rising popularity of repeating rifles. Marlin-Ballard rifles were and are well-known for their accuracy and workmanship, and fancy-grade long-range rifles are eagerly sought after by modern collectors. Marlin continued to expand his product line, introducing his Model 1881 lever-action tubular magazine repeating rifle in that year. Many key features had been patented by Andrew Burgess and others, but John Marlin incorporated these into a single functional firearm. This rifle was available in a variety of calibers ranging from .32-40 to 45-70 Government, a feature that would not be duplicated by competing Winchesters for several more years.” This example has terrific mechanics and a decent bore given its age. This would be a terrific addition to a Marlin collection, especially one lacking their earliest repeating rifle. Please see our photos and good luck!