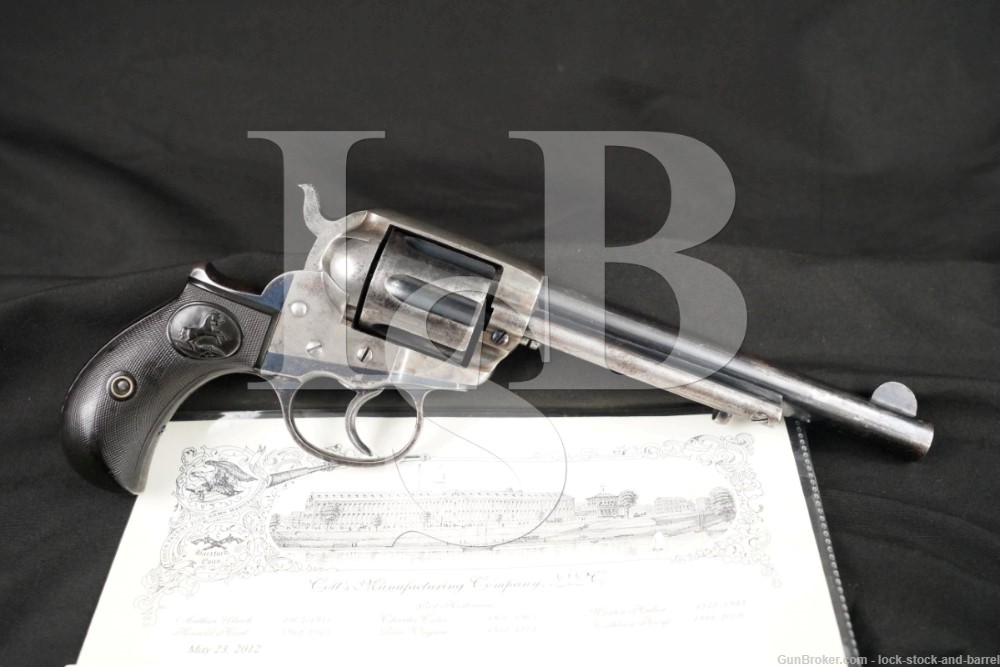 Action Type: Single and Double Action Revolver with Side Loading Gate 6-Round Cylinder

Sights / Optics: The front sight is tall thin half-round blade fixed to the barrel. The rear sight is a “V”-notch in the top strap.

Stock Configuration & Condition: The grips are two-piece checkered black hard rubber with rampant colt in oval at the top of each panel. The grips have light handling wear with some smoothed checkers along the ridge at the bottom of each grip where the birdshead meets at a point. There are a few scattered light nicks with a more notable scrape at the rear edge of the right panel toward the bottom. The checkering is generally well defined and there is pretty good detail in the rampant colts. There are no chips or cracks. Overall, the grips are in Very Good condition.

Overall Condition: This revolver retains about 65% of its metal finish. The barrel has finish wear along the left side and on the top-right in front of the ejector housing. There is wear along the length of the ejector housing. The backstrap is mostly worn to white with lighter wear on the frontstrap and trigger guard, the flats of the grip frame have generally strong finish and there is good finish around the top of the trigger guard. The cylinder has wear around and behind the flutes. The frame’s case color has muted, but there is figuring visible in the flats and in front of the cylinder. There is strong blue finish in the back face of the hammer but the top of the spur shows handling wear. There is scattered light surface oxidation with infrequent minor erosion. There are some light nicks, scuffs and scratches. The head of the cylinder pin has tool marks. The screw heads range from sharp to tool marked with strong slots. The markings are generally clear, the circle around the rampant colt on the frame is incomplete. Overall, this revolver is in Fair-plus condition (see Mechanics).

Mechanics: The cylinder stop does not disengage when the hammer or trigger are operated, preventing proper cycling of the cylinder. The hammer does not catch the sear when pulled back for use in single action and the trigger must be pressed firmly in double action to ensure that it will fall, otherwise it will only drop as the trigger is released. We did not fire this revolver. As with all used firearms, a thorough cleaning may be necessary to meet your maintenance standards.

Box, Paperwork & Accessories: This revolver comes with a Colt Archives letter confirming that this revolver shipped in its present configuration February 10, 1902. The revolver sold to E.G. Shields, Insular Purchasing Agent, Manila, Philippine Islands and shipped to J.H. Threw in New York, marked for E.G.S. in Manila. The revolver was one of 350 in the shipment.

Our Assessment: The Colt M1877 was a double action revolver manufactured by Colt’s Patent Fire Arms from January 1877 to 1909 for a total of 166,849 revolvers. The Model 1877 was offered in three calibers, which lent them three unofficial names: the “Lightning”, the “Thunderer”, and the “Rainmaker”. The principal difference between the models was the cartridge in which they were chambered: the “Lightning” being chambered in .38 Long Colt; the “Thunderer” in .41 Long Colt. An earlier model in .32 Colt known as the “Rainmaker” was offered in 1877. The M1877 was designed by one of the inventors of the M1873 Colt Single Action Army, William Mason, as Colt’s first attempt at manufacturing a double-action revolver and was also the first successful US-made double-action cartridge revolver. Neither “Lightning” nor “Thunderer” were Colt designations, nor used by the factory in any reference materials. Both terms were coined by Benjamin Kittredge, one of Colt’s major distributors, who was also responsible for the term “Peacemaker” for the Single Action Army. Old West Outlaw John Wesley Hardin frequently used both “Lightning” and “Thunderer” versions of the Colt 1877 revolver.

This Thunderer is quite interesting as it is one of only 600 which were shipped to the Philippines. According to noted Colt historian Don Wilkerson, he notes that the revolvers were delivered at a time of some chaos surrounding the office of the Insular Purchasing Agent. In a report to the Philippine Commission in October of 1902, E.G. Shields noted that all of the materials of his office, including paper and pencils, had been transferred to various Army units as a transition between U.S. Army and civilian administration took place. Perhaps due to this chaos, there is little record of the 1877 revolvers which were delivered, not even who they were issued to. What is known from Colt records is that there were two shipments, the first for 350 and the second for 250 revolvers. It has also been noted by Colt collectors that they are quite scarce in the United States, with only a handful known to have come back to find their way into private collections.

This example has some mechanical issues (which those familiar with the 1877 may not find surprising!) and shows honest wear consistent with its age. Given the scarcity of these revolvers, especially here in the US, this would be a great addition to a Colt collection, especially one missing the “Thunderer”. Please see our photos and good luck!