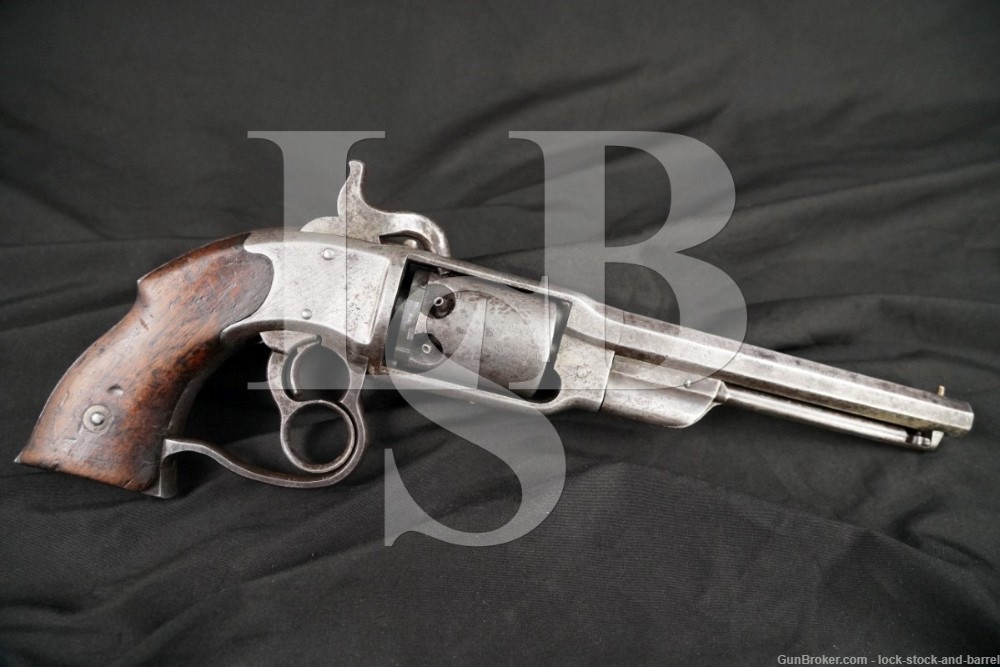 Sights/ Optics: There is a brass post fixed by the muzzle.

Stock Configuration & Condition/ Grip: The grip panels are two-piece wood. The grip panels have light-moderate compressions, handling marks, nicks and scuffs. Notably, the front bottom portion of the left panel has a small chip and the wood is a bit shy to the frame at the bottom of the right panel. Overall, the grip panels are in Good condition for Antiques.

Bore Condition: The bore is semi-bright with mostly sharp rifling. There is light-erosion concentrated in the grooves and some scattered patches of light-moderate patches of pitting.

Overall Condition: The revolver has no surviving finish. The gun’s metal surfaces are coated in light to moderate surface oxidation and it has taken a light patina color. There are scattered light-moderate handling marks, nicks and scuffs. Notably, the nipples have some light wear in addition to some oxidation, there is light wear along the leading edges and the ramrod assembly is not properly secured to the frame. The markings remain clear. The screwhead that secures the ramrod assembly to the frame is deformed and loose, otherwise the screw-heads remain serviceable. Overall, the pistol is in Good condition for an Antique.

Mechanics: This revolver has a unique ring-lever inside its heart shaped trigger guard, said lever brings the cylinder back while advancing the cylinder to the next chamber. While the lever is held back, the small trigger releases the hammer onto a nipple. The ramord assembly is not properly secured to the revolver but otherwise the gun’s action remains functional. We did not fire this handgun. As with all used firearms, a thorough cleaning may be necessary to meet your maintenance requirements.

Our Assessment: This is a Savage Revolving Fire-Arms Company manufactured Navy Revolver which was manufactured in the 1860s. The gun was produced from 1861 until sometime in the mid-1860s (there are conflicting accounts but it appears the gun’s manufacture ceased sometime before the Civil War ended). The gun saw widespread use by both the Union and Confederate armed forces during America’s bloodiest conflict . The gun proved unpopular with soldiers because it was overly complicated to operate compared to other revolvers and it was also chambered for the lower .36 “Navy” caliber instead of the more popular .44 “Army” caliber. The gun’s unique design was innovative but not suited to the rigors at the front. In more recent times historians and collectors have come to recognize the gun’s innovative design and it has proven a popular commodity on the Antique firearms market. It should also be noted that the Savage Revolving Fire-Arms Company was not a predecessor of the modern company Savage Arms Co., it seems to have gone under at some point during the epoch of the Civil War.

The gun has wear consistent with its age and a poorly seated ramrod, but it’s still well preserved for a Civil War-era handgun. This particular revolver was purchased for the military with small inspection marks and a cartouche on the left grip. This is a fascinating old Civil War revolver that fans of historical firearms will not want to miss out on. Good luck on your bid!