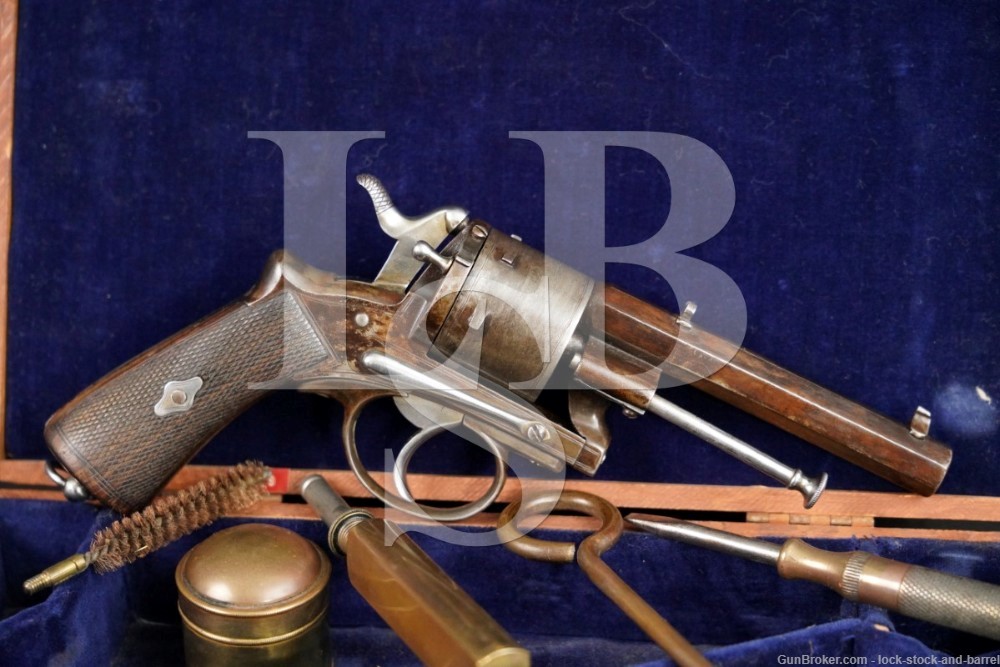 Sights/ Optics: The front sight is a blade dovetailed by the muzzle. The rear sight is a “U”-notch dovetailed slightly ahead of the cylinder. Both sights are on the barrel.

Stock Configuration & Condition/ Grip: The grip panels are two-piece checkered wood with a square-butt. The grips have some light handling marks, nicks and scuffs. Notably, the washer on the right panel is loose and will fall out when the retaining screw is removed, but it is easily secured back into position. The checkering remains sharp. There are no chips or cracks. Overall, the grips are in Very Good condition for Antiques.

Bore Condition: The bore is grey with mostly sharp rifling. There is light-moderate erosion scattered throughout the bore.

Overall Condition: The revolver retains about 5% of its metal finish. The blued parts are coated in light surface oxidation and have taken a patina color. There are some light handling marks, nicks and scuffs. Notably, there is some light wear around the muzzle and the leading edges have finish loss. The markings remain clear. The screwheads have some light tool-marks but they remain serviceable. Overall, the revolver is in Very Good condition for an Antique.

Mechanics: The action functions correctly. The single-action trigger is crisp and the double-action is smooth. We have not fired this revolver. As with all used firearms, a thorough cleaning may be necessary to meet your maintenance requirements.

Box Paperwork and Accessories: The gun comes with a wood case that has blue felt lining, a brass case with cleaning pads, a cleaning brush head, a cleaning rod, a wrench and an oiler. The case has some light handling wear but it remains in Very Good condition.

Our Assessment: This is a Leopold Gasser Waffenfabrik made Gasser-Kropatschek Model 1876 Officer’s Revolver chambered for 9mm Gasser-Kropatschek rounds. Leopold Gasser designed his namesake revolver which was adopted for use by the Austro-Hungarian military in 1870 and several variants were issued until it was phased out for more modern firearms in 1898. Despite this, the story of the Gasser Revolver is actually more closely associated with the small Kingdom of Montenegro than with Austro-Hungary.

The small Kingdom of Montenegro was embroiled in military conflicts with the Ottoman Empire when Prince Nikola came to power in the 1860s. He sought support throughout Europe to help him as he struggled to maintain his small Orthodox Christian kingdom’s sovereignty which was threatened by the Ottoman Empire. He ultimately joined a Russian led coalition during the Russian-Turkish War of 1877-1878 which resulted in a decisive defeat for the Ottomans. Montenegro saw its borders expand, but the threat of war always lingered in the Balkans. In 1910 he proclaimed that all male citizens of Montenegro were members of a national militia and that they had both a right and duty to own at least a single Gasser Revolver. This was done because the King deduced that a well armed populace could deter his larger neighbors from attempting to annex the small kingdom. Montenegro was soon flooded with Gassers, a mix of guns made by the Gasser firm and a large number of Belgian, Austro-Hungarian and Spanish made ones as well. When WWI broke out Montenegro and Serbia were allied against Austro-Hungary (despite having acquired a good deal of Gassers that originated there), but the Montenegrin military was poorly matched against the larger and better armed Austro-Hungarian military (and all those Gassers had a negligible effect on the conflict). Finally, in 1916 Montenegro was conquered by the Austro-Hunagrians and King Nikola was forced into exile and was excluded from the post war government established after WWI. King Nikola I passed away while in exile in 1921 at the age of 79.

This revolver’s exact manufacturer is not simple to determine. A number of small firms made Gassers and would sometimes use misleading markings to confuse where the gun revolver was actually made. The gun does have a stamp marked “L. GASSER / WIEN”, but generally these revolvers were marked “L. GASSER PATENT WEIN”, and the Gasser firm used a distinct logo, a heart pierced by an arrow, which is not present on this revolver. Considering the stamp on the frame is faded, it is possible the original markings have simply worn off but considering the odd sunburst mark on the left grip strap it is possible this gun was made by another firm. There is no reliable way to date this particular specimen, and since the gun was in service with Montenegro into the early twentieth century it has to be considered a C&R. The gun’s square grip is also not normal for a military issued Gasser and indicates this was likely privately purchased. The gun is well preserved retaining its unique aesthetic and the revolver remains mechanically sound. This is a great option for historical firearms collectors. Good luck on your bid!