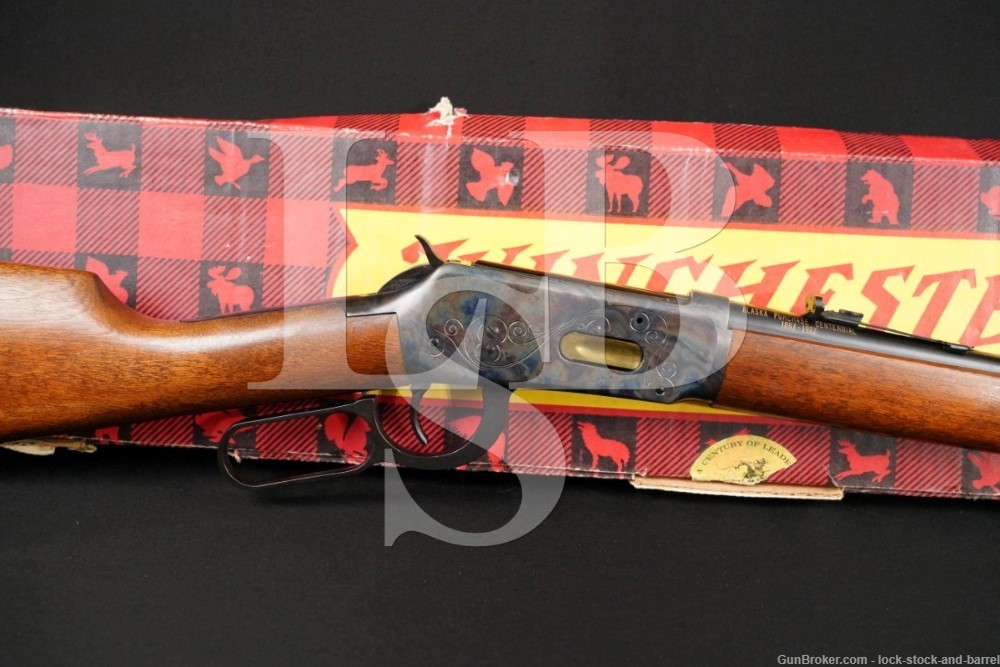 Sights / Optics: The front sight is a beaded blade atop a serrated riser that is fixed to the barrel. The rear sight is a U-notch elevator sight that is dovetailed to the slide. The leaf is finely adjustable for elevation. The left side of the receiver has two drilled, tapped, and filled holes for a side mounted sight (not included).

Stock Configuration & Condition: The stocks are two-piece smooth wood with a banded forend, straight grip, straight comb, and press-checkered steel buttplate. There is a brass inlay on the right side of the buttstock that is marked “ALASKA PURCHASE CENTENNIAL 1867-1967”. There is a compression on the belly and a few light draglines on the left side of the forend. There are no chips or cracks. The LOP measures 13 3/8″ from the front of the trigger to the back of the buttplate. The plate shows hardly any wear. Overall, the stocks are in about Fine-Plus condition.

Overall Condition: This rifle retains about 97% of its metal finish. There is build-up on the front sight under the hood. There is some dried grease buildup in certain crevices. There are a few scattered light marks about the metal. The action shows light operational wear. The screw heads are sharp. The markings are clear. Overall, this rifle is in about Fine-Plus condition.

Mechanics: The action functions correctly. The rifle has a half-cock safety and a lever safety. We have not fired this rifle. As with all used firearms, a thorough cleaning may be necessary to meet your maintenance standards.

Our Assessment: On display is a Winchester Model 94 Alaska Purchase Commemorative manufactured in 1967. The Alaska Purchase was the United States’ acquisition of Alaska from the Russian Empire. Alaska was formally transferred to the United States on October 18, 1867, through a treaty ratified by the United States Senate. Russia had established a presence in North America during the first half of the 18th century, but few Russians ever settled in Alaska. In the aftermath of the Crimean War, Russian Tsar Alexander II began exploring the possibility of selling Alaska, which would be difficult to defend in any future war from being conquered by Russia’s archrival, the United Kingdom of Great Britain and Ireland. Following the end of the American Civil War, U.S. Secretary of State William Seward entered into negotiations with Russian minister Eduard de Stoeckl for the purchase of Alaska. Seward and Stoeckl agreed to a treaty on March 30, 1867, and the treaty was ratified by the United States Senate by a wide margin. This rifle is in about Fine-Plus condition with 97% of its metal finish remaining, a bright bore and strong mechanics. This rifle would make an interesting addition to a Winchester collection, particularly for any of you Alaska residents. Please see our photos and good luck!