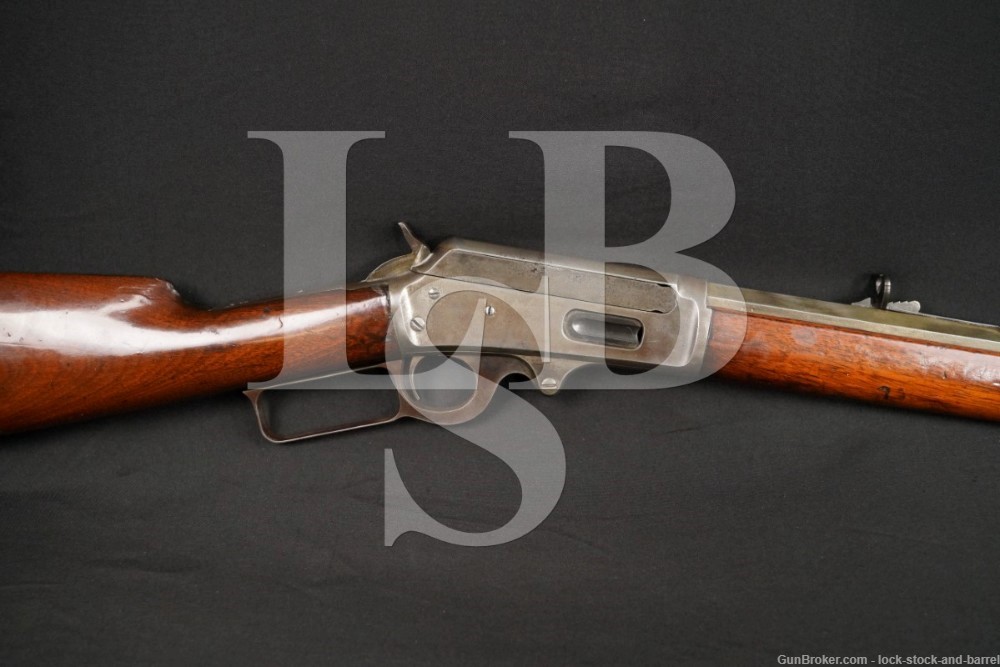 Action Type: Lever Action Rifle with Half-Length Tubular Magazine. The mag tube is not original to the gun.

Barrel Length: 22.75? Half Octagonal, Half Round. The lack of a shelf between the octagonal and round portion of the barrel leads us to believe that this barrel was modified after leaving the factory.

Stock Configuration & Condition: The stocks are two-piece smooth walnut with a capped forearm, straight grip, straight comb, and a crescent steel buttplate. The wood has been refinished as is evident by areas of pooling. There are several scattered nicks, compressions, and draglines. There are two notable dark gashes on the forearm on the bottom and left side. There is notable pooling around the wrist. There are no chips or cracks. The LOP measures 13 1/4” from the front of the trigger to the back of the buttplate. The buttplate shows scattered light pitting. The stocks rate in about Very Good-Plus overall condition as Antique and refinished.

Bore Condition: The bore is somewhat bright with some scattered pitting in the grooves. The rifling shows some wear but is well defined and deep.

Overall Condition: This rifle retains about 10% of its current metal finish. There are some trace amounts of case color on the upper sides of the lever, though it shows a darker patina throughout. There are scattered nicks, dings, and scratches throughout. There is scattered pitting throughout, most notable on the receiver. Evidence of cold blue touch up is visible on the barrel The screw heads range from lightly tool marked to disfigured with serviceable slots. The markings are clear. Overall, this gun rates in about Good condition as Antique and touched up with cold blue.

Our Assessment: This is the first rifle Marlin designed for, then new, smokeless powder cartridges. Marlin christened the improved lever-action Model 1893, and offered it as a rifle or a saddle-ring carbine, both featuring case hardened receivers and sporting blued Ballard match-grade barrels. It was produced from 1893 to 1936. This example was manufactured in 1894, making it rather early in production. This example has strong mechanics and would make a good refurbishment project. Please see our photos and good luck!