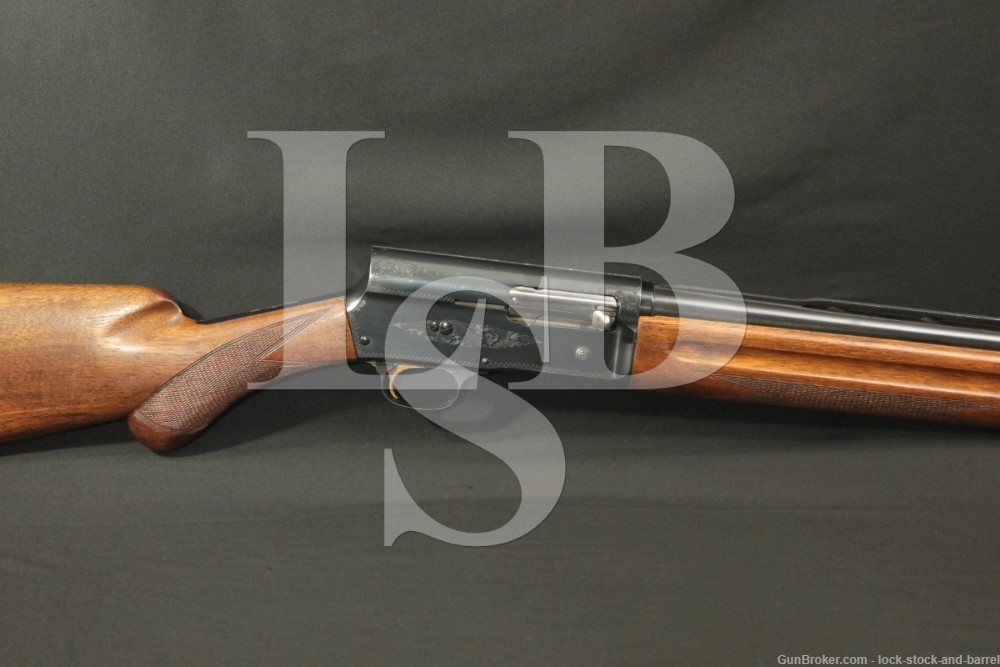 Stock Configuration & Condition: The stocks are a two-piece checkered walnut set with a rounded pistol grip, finger grooves running the length of the forend and a black hard rubber FN Browning Automatic buttplate. There is a scrape at the left-front of the wrist. Otherwise, the stocks have only a few minor marks and light handling wear. The checkering is well defined in the forend, sharp in the wrist. There are no chips or cracks. The LOP measures approximately 14 1/4″ from the front of the trigger to the back of the buttplate. The plate has very light wear at the heel and toe with well defined lettering. Overall, the stocks are in about Fine condition.

Finish Originality: The barrel has been refinished, likely at the time the rib was installed, the receiver’s finish appears original.

Overall Condition: This shotgun retains about 90% of its metal finish. The finish is thinning at most edges. The barrel has light operational wear from the forend on the bottom and a few scattered minor marks. The receiver has wear around the optic mounting holes, a few scattered light nicks and scrapes and infrequent spots of light surface oxidation and surface erosion, the most notable just forward of the optic mounting holes. The bolt and lifter show light operational wear with the tip of the bolt handle having either light surface erosion which has been scrubbed out or light marring. The markings are clear with the exception of the right-side barrel markings which are shallow and faint. The screw heads range from sharp to tool marked with strong slots. Overall, this shotgun rates in about Good condition and would rate Very Good but for the missing magazine spring.

Mechanics: The magazine spring is missing, allowing the follower to slide freely in the tube. Otherwise, the action functions correctly. There is a magazine cutoff on the left front of the receiver, a safety at the rear of the trigger guard and a bolt release on the right side of the receiver. We have not fired this shotgun. As with all used firearms, a thorough cleaning may be necessary to meet your maintenance standards.

Our Assessment: The Browning Automatic 5, most often Auto-5 or simply A-5, is a recoil-operated semi-automatic shotgun designed by John Browning. The Browning Auto-5 was the first mass-produced semi-automatic shotgun. Designed by John Browning in 1898 and patented in 1900, it was produced continually for almost 100 years by several makers with production ending in 1998. It features a distinctive high rear end, earning it the nickname “Humpback”. Browning presented his design to Winchester, where he had sold his rifle designs, but they refused his terms. He then went to Remington, but the president of the company died while he was waiting to offer them the gun. Browning then took the gun to FN in Europe and was so confident of his design that his first order was for 10,000 shotguns. The design was later licensed to Remington for their Model 11 and to Savage Arms for their Models 720 and 755. During WWII, production of the Auto-5 was moved to Remington alongside the Model 11 until FN could resume production after the war. This Auto-5 is a Sweet Sixteen, built by FN after WWII with Grade I engraving on the receiver and tangs. It is chambered for 16 GA. 2 3/4” shells and has a 27 1/2” barrel choked Full with a Simmons rib installed. The gun has also had the receiver drilled and tapped for an optic mount. The gun doesn’t appear to have seen too much use, and other than the missing magazine spring is in great mechanical condition with nice stocks. Please see our photos and good luck!