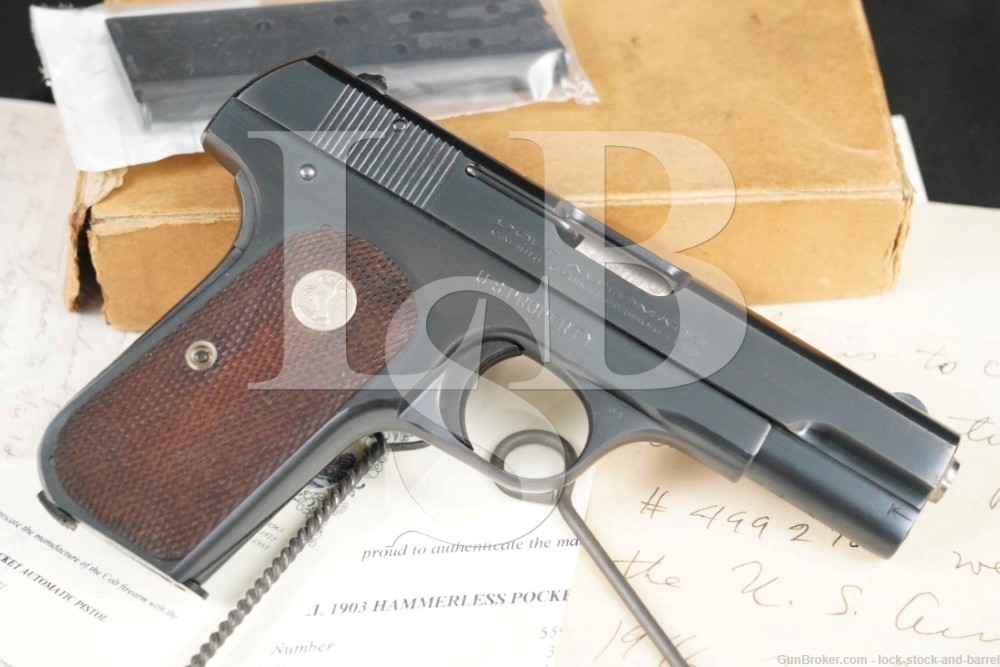 Year of Manufacture: 1942 (https://www.colt.com/serial-lookup), according to the included Colt letter the pistol shipped September 8, 1944.

Stock Configuration and Condition: The grips are checkered walnut with silver-colored rampant colt medallions. The grips have minor handling wear with no notable damage. The checkering is well defined, generally sharp. There are no chips or cracks. Overall the grips are in Fine-plus condition.

Overall Condition: This handgun retains about 96% of its metal finish. The finish is thinning lightly at some edges. There are scattered spots of minor surface oxidation. There are a couple of small nicks in the frontstrap and another on the top of the slide in front of the front sight. The action shows minor operational wear. The screw head is sharp. The markings are clear. Overall, this pistol rates in Fine condition.

Box, Paperwork, and Accessories: This pistol comes with a two-piece brown cardboard box with the serial number hand-written on the bottom in pencil, cleaning rod and bore brush, a total of two 8-round magazines both marked “CAL.32 / COLT” on their floorplates, a Colt Archives letter and a hand-written letter detailing some of the pistol’s history. The box has some fraying and tears at corners. The letter confirms that this pistol shipped September 8, 1944 to the Office of Strategic Services in the Fowler Building in Rosslyn, Virginia as one of 320 pistols of the same type in the shipment.

Our Assessment: The Colt Model 1903 Pocket Hammerless is a semi-automatic pistol designed by John Browning, and was the 1st of the Colt concealed hammer models, followed by the M1908 in .380 ACP. Despite the title ‘Hammerless’, the M1903 and M1908 pistols do have a hammer, which is covered and hidden from view under the rear of the slide. This allowed the weapon to be carried in and withdrawn from a pocket quickly and smoothly without snagging. These pistols were popular civilian firearms for much of their life, used by both sides of the law as well as for lawful recreation.

This example is a little more interesting, having been shipped to the Office of Strategic Services in September of 1944. Building on previous organizations and efforts, the OSS was officially established in June, 1942 to collect and analyze intelligence and conduct special operations which fell outside the roles of existing agencies.

This pistol comes from the collection of author Kevin Williams, best known for his exceptional work on the topic of General Officers Pistols & Clandestine Organization Pistols of WWII, enhancing this pistol’s already historically important connection to the OSS during World War 2. In addition to the Colt Archives letter, it comes with a hand-written letter dated March 14, 1947 indicating that it was purchased from the U.S. Army prior to March 1, 1946 by then Major M. H. Jegg of the Veteran Corps. It appears Maj. Jegg was returning to India and left this pistol and a Remington shotgun behind in the U.S. with a Colonel James D. Barnett (possibly Barrett). It will make a great addition to even advanced collections. Please see our photos and good luck!