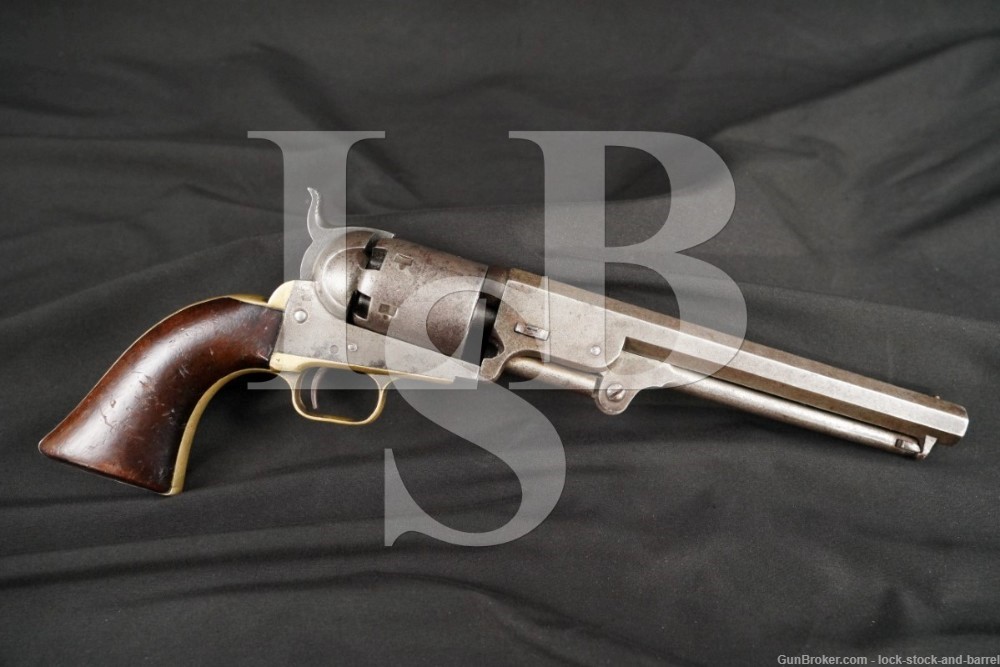 Markings: The top of the barrel is marked “- ADDRESS SAML COLT NEW-YORK CITY-”. The left of the frame is marked “COLTS / PATENT”. The right flat of the trigger guard is marked “T”, the left bow is marked “B”. The bottom of the barrel assembly, frame, trigger guard, butt and the top of the loading lever are each marked “4871”. The loading lever’s serial marking runs across the flat perpendicular to the bore, appropriate for this serial range. The bottom of the arbor is marked “871”. The outside of the cylinder has a roll-engraved naval scene and “COLTS PATENT No 4871”. The backstrap inlet of the grip has faint hand-writing, but we can only make out “4”.

Sights / Optics: The front sight is a brass post (also called a “pin type”) threaded to the barrel at the muzzle. The rear sight is a “V” notch at the front of the hammer, visible when cocked.

Stock Configuration & Condition: The grip is one-piece smooth walnut “slim-jim” type. The grip has light-moderate handling wear with scattered light nicks, scuffs and scratches. There are no external chips or cracks but there is a crack on the interior piece in the backstrap inlet. The wood is generally well fit to the metal, slightly shy in some areas. Overall, the grip is in Very Good condition as Antique.

Bore Condition: The bore is light gray, the rifling is sharp where not interrupted by erosion. There is scattered light erosion in the bore with infrequent moderate erosion and light pitting.

Overall Condition: This revolver retains about 5% of its metal finish. The steel parts have worn to white or gone to a light patina with scattered minor surface erosion. The grip frame has some spots of discolored silver in corners at the trigger guard and behind the hammer at the top of the backstrap with stronger silver plate on the portions covered by the grip. There are several scattered light nicks, scuffs and scratches. The markings are generally clear, the naval scene on the cylinder shows wear. The screw heads range from sharp to disfigured with questionably useable slots. Overall, this revolver is in about Very Good condition as Antique.

Mechanics: The action functions correctly. The cylinder lockup has very little play on all 6 chambers. The barrel has barely perceptible play to the frame. We have not fired this revolver. As with all used firearms, a thorough cleaning may be necessary to meet your maintenance standards.

Our Assessment: The Colt 1851 Navy revolver was produced by Colt up until 1873 when Colt cartridge revolvers were introduced. It got its name from the Navy battle scene on the cylinder that Colt added to commemorate the victory of the Second Texas Navy at the Battle of Campeche in 1843. Texas had previously ordered the Colt Paterson revolver, Colts first big success, and Colt wished to show gratitude. The 1851 Navy was carried as a belt gun by armies on both sides in the Civil War and was a favorite of General Robert E. Lee.

There were many variations and changes made over the production of the model, making the 1851 a prime collector’s item and this example is a quite early Third Model, which started in the 4,200 serial range. The collector value of this revolver is enhanced by being from the 1st year of production and its correct features. Early features include a loading lever screw entering from the right, lever serial marking which is perpendicular to the bore rather than parallel, “slim jim” grip profile, thin type loading lever catch, thin barrel lug with non-beveled loading notch, and small round trigger guard.

This revolver is a nice piece that will make a great addition to a collection of early Colt revolvers or 1851 Navies, in particular. Please see our photos and good luck!