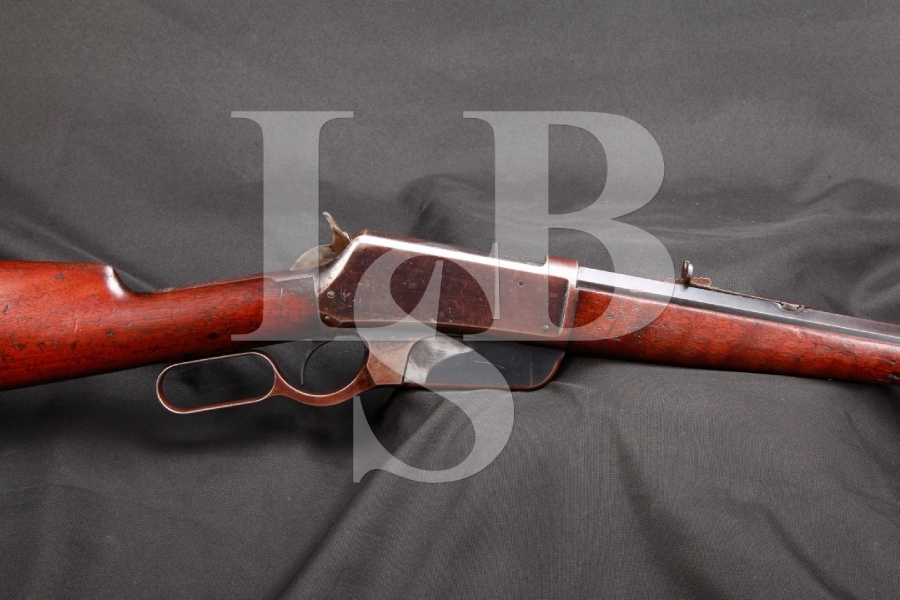 SOLD FOR:$ 3,036.99
Make: Winchester
Model: 1895
Serial Number: 3826
Year of Manufacture: 1896
Caliber: .40-72 Win. (40-72 W.C.F.)
Action Type: Lever Action with Internal Box Magazine
Markings: The top of the barrel at the receiver is marked “40-72 W.C.F.”. The top of the barrel in front of the rear sight is marked “MANUFACTURED BY THE / WINCHESTER REPEATING ARMS CO. NEW HAVEN, CONN. U.S.A.”. The top tang is marked “WINCHESTER / MODEL 1895”. The bottom tang is marked “3826”.
Barrel Length: The octagon barrel is about 26” in length.
Sights / Optics: The front sight is a German silver blade that is dovetailed into the top of the barrel. The rear sight is a “U” notched semi-buckhorn elevator sight dovetailed into the barrel.
Stock Configuration & Condition: The stocks are two piece smooth walnut with a straight grip, lacquered finish and a Schnabel tipped forend with a black tip inlet into the wood. The butt has a crescent shaped steel buttplate. The stocks are dark with oil staining which is heaviest around the receiver and its tangs. The stocks show numerous bruises which are mostly shallow and dark with oil staining. In addition, there is a recent compression mark on the right side of the stock, a large mark on the left side of the wrist, and a gouge and a few compression marks at the front of the forend. There is also a 1” long crack at the right front edge of the forend and small chips/abrasions on the left front edge. The wood to metal fit is excellent. The LOP measures 12 7/8” from the front of the trigger to the back of the buttplate, which fits the butt well. The buttplate shows surface loss, spots of solid erosion and very light wear at the heel and toe. It is in about Very Good condition. The stocks rate in about Good overall condition.
Type of Finish: The rifle is blued and the hammer is case colored.
Finish Originality: All Original
Bore Condition: The bore is dark. The rifling shows moderate wear. There is light erosion the length of the bore with a ring of slightly heavier erosion 2” from the muzzle.
Overall Condition: This rifle retains about 70% of its metal finish. The barrel and receiver both show small spots of surface frosting scattered over their surfaces, which has turned to pinprick surface erosion on the left side of the magazine and a few spots of solid erosion on the barrel. The barrel shows thinning on its edges, tiny compression marks on its front edge, several light marks along its length, a compression mark in the left shoulder 2” in front of the forend and 2 marks through the finish at the forend. The receiver shows surface loss on its edges and its top and bottom surfaces, with thinning and a few marks through the finish on its sides and tangs. There is also surface loss on the lever and the bottom of the magazine well. These areas of surface loss are all starting to develop a brown patina. There is also surface loss on the sides of the magazine without a patina from wear by the lever, a compression mark on the front left edge of the lever, and tool marks in the upper tang behind the stock screw. The hammer checkering shows light wear. The screw heads are mainly sharp except for the upper tang screw, which is disfigured. The markings are clear. Overall, this rifle rates in about Fine condition.
Mechanics: The action functions correctly. We have not fired this rifle.
Box, Paperwork & Accessories: None
Our Assessment: The 1895 Winchester was the first model to incorporate a non-detachable box magazine. This is the model Teddy Roosevelt called his “Big Medicine” that he used in hunting here and in Africa. This rifle became the preference of major powers worldwide, with Russia alone purchasing nearly 300,000 1895’s just before World War I. The Model 1895 was designed for the new generation of cartridges utilizing smokeless powder and pointed bullets, and many of its original chamberings remain popular today. With its quick handling characteristics, box magazine and pointed bullet capability, the Model 1895 changed the world of sporting rifles forever. The .40-72 Win. was a blackpowder straight walled cartridge developed for the 1895 rifle, and introduced with the rifle in 1895. By 1911, it was dropped by Winchester as an available cartridge in favor of the more popular smokeless cartridges. However, people are still using them, made from .444 Marlin brass, for BPCS rifle competition as they tend to shoot a little further than the .40-65 round. This Winchester Model 1895 Rifle is chambered in .40-72 Win. and it is in about Fine condition with 70% of its original finish remaining. It was made in 1896, the second year the rifle was produced. This rifle has a scalloped receiver, two-piece lever, Schnabel forearm and straight grip stock. The finish shows thinning on the edges of the barrel and the sides of the receiver with surface loss on the top and bottom surfaces of the receiver and the sides and bottom of the magazine. There are spots of surface frosting scattered over the metal surfaces, with a few spots of solid erosion on the barrel and light pinprick surface erosion on the left side of the magazine. There are a few compression marks in the stocks, with small chips and a crack at the front of the forend, but the wood to metal fit is excellent. The bore is dark with moderate wear in the rifling and light erosion. However, this very early rifle with its somewhat rare caliber is sure to attract the attention of Winchester collectors and there is not much chance it will ever be used for deer or elk hunting again.