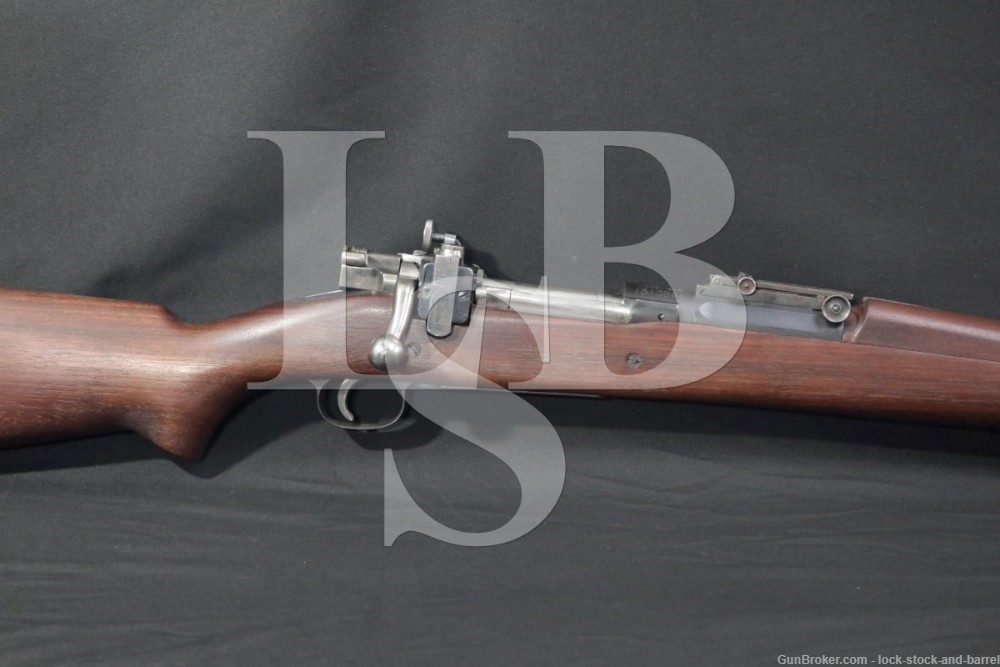 Model: 1903. This Rifle was rebuilt in the manner of a National Match “Style B” Rifle.

Stock Configuration & Condition: The two piece hardwood stock has a pistol grip, nosecap with bayonet lug, stacking loop, barrel band, 2 sling loops, 2 through bolts and a metal buttplate with hinged door for storage. The buttplate shows scrapes. The wood shows light scrapes & small scratches. The LOP measures 13 1/8 inches from the front of the trigger to the back of the buttplate. The stock rates in about Fine overall condition.

Overall Condition: This rifle retains about 92% of its metal finish. The metal shows scrapes, scratches and light discoloration. The most prominent marks are the scratches on the barrel & front sight. The bolt and right side of the receiver show operational wear. The screw heads show use. The markings are well deep. Overall, this rifle rates in about Very Good Plus condition.

Mechanics: The action functions correctly. The safety has been reversed. We did not fire this rifle. As with all used firearms, a thorough cleaning may be necessary to meet your maintenance requirements.

This Springfield Armory 1903 was made back in 1929. It has been rebuilt in the manner of a National Match “Style B” Rifle. The rifle uses a Springfield pistol grip “C” stock, a star gauged barrel, a Lyman aperture sight and the bolt is marked with the rifle’s serial number. These are all indicative of a National Match “Stylle B” Rifle. This 1903 will add to your Military collection. Good luck.