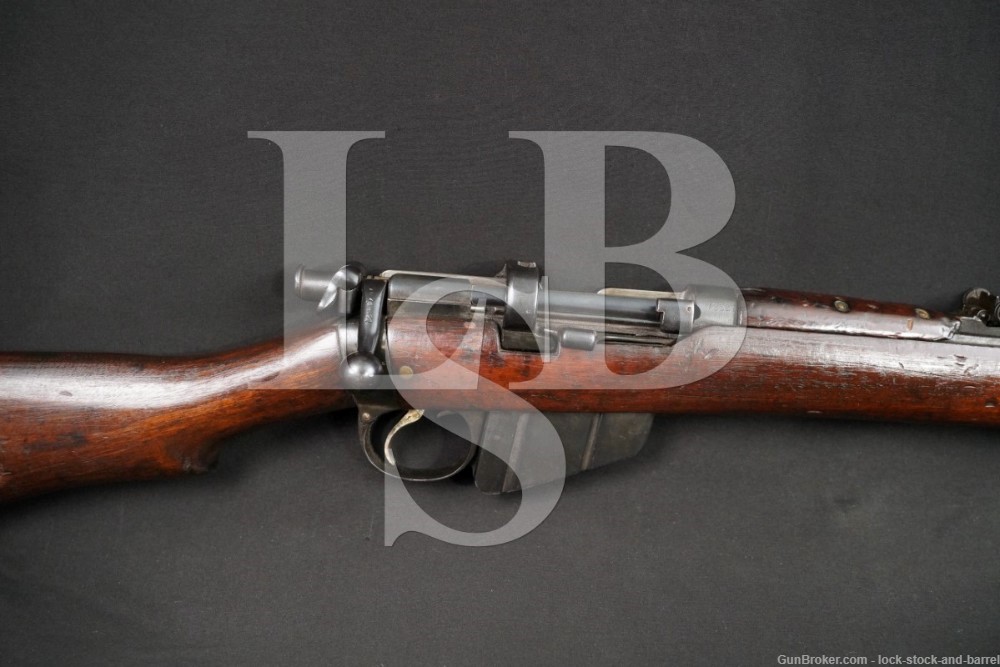 Sights / Optics: The front sight is a bladed post set atop a ramped base and between two protective ears. The rear sight is a “U” notched sliding sight escalator when down. The sight base is marked “200 300 400 500 600” for use with the escalator. It flips up to become a sight ladder marked from “6 – 19”.
The front volley sight is a rotating dial with a point at one end and the sight at the other. The sight is rotated to the desired distance. It is marked “1700” and from “18 – 27”. The rear sight is a tall flip up aperture attached to the safety.

Stock Configuration & Condition: The wood stock has has a straight grip with finger groove, nosecap with bayonet lug, cutout for the missing cleaning rod, stacking loop, 2 sling loops, barrel band, scallop for the volley sight on the left forearm, and a brass buttplate with a hinged door for storage. The buttplate shows several scratches & small dents as well as surface erosion. The front of the handguard shows a thin crack that appears to have been repaired. The wood shows numerous scrapes and scratches. Several of these marks have damaged small portions of the surface wood. These marks have been oiled. The LOP measures 13 1/4 inches from the front of the trigger to the back of the buttplate. The stock rates in about Very Good overall condition as an antique.

Bore Condition: The bore is gray. There is erosion in the bore. The erosion is more prominent at the muzzle and in the grooves.

Mechanics: The safety is stuck in the “FIRE” position. We did not try to force it.
The action functions otherwise. We have not fired this rifle. As with all previously owned firearms, a thorough cleaning may be necessary to meet your maintenance standards.

Box, Paperwork & Accessories: The rifle comes with a refinished 10 round magazine. Its feed lips have been repaired. It is in Very Good Plus condition.

Our Assessment: This Rare Lee-Enfield Mk I (LE I) was made back in 1898 at Royal Small Arms Factory (RSAF) Sparkbrook in England. In 1908 is was converted by Enfiled to a a CLLE MkI* (Charger Loading Lee-Enfield Mark I). The conversion included the addition of a charger bridge to the receiver so that stipper clips could be loaded into the rifle.
Sparkbrook Enfields are scarce due to their limited numbers. RSAF Sparkbrook was acquired by Birmingham Small Arms Company (B.S.A. Co.) in 1906. Many 1906 and 1907 dated Sparkbrok Enfields are marked “B.S.A.Co. / SPARKBROOK” on the stock collar making “SPARKBROOK” only rifles more scarce.
This Sparkbrook rifle is also marked “ENFIELD” due to the conversion.
This is a rare rifle with lots of great markings as well as its original magazine cutoff and intact volley sights.
This is an ideal Enfield for the collector. Good luck.