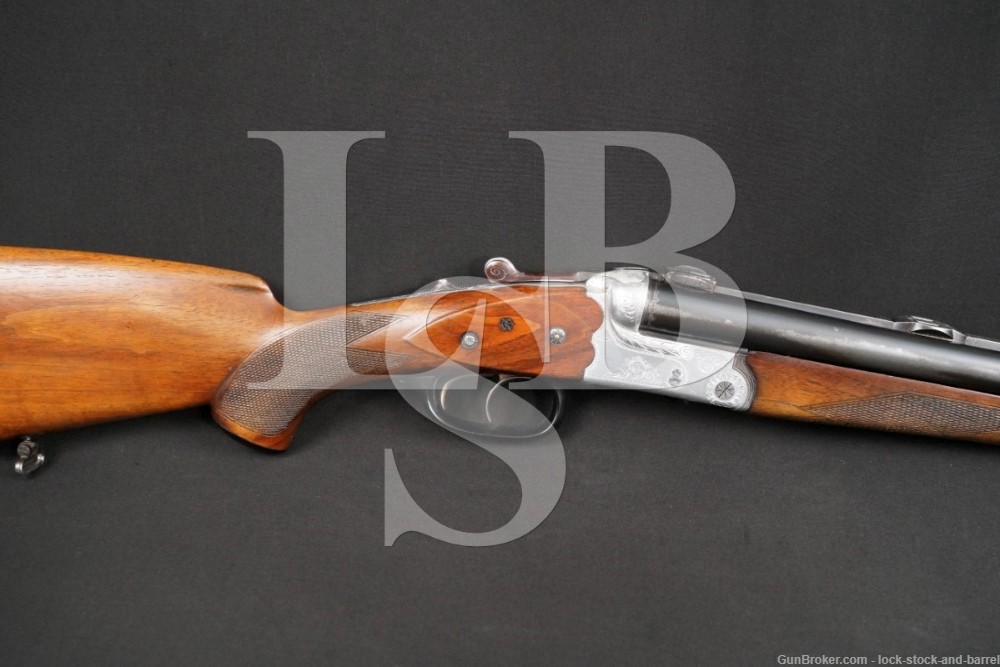 Markings: The bottom of the rifled barrel is marked “42950”, “AH” (August Heym) and with a German proof in front of the barrel lug, the bottom-left of the monobloc is marked “7x57R”, the bottom right has German proofs and “461” proof date code. The shotgun barrel flats are each marked “16/70”. The rear face of the barrel assembly, under the rifle barrel chamber has an eagle over “M” marking. The left barrel is marked “CHROM VANADIN” with a BVG logo. The inside of the forend iron is marked “42950” and “AH”. The left shoulder of the receiver is marked “42950” and “AH”, the right shoulder has a German proof mark and import mark “TAI MINOT, MD MOD. DRILLING”. The bottom of the receiver in front of the trigger plate is marked “FR. WILH. HEYM / DURAL”. The receiver has light scroll engraving.

Sights / Optics: The front sight is a blade which is in-lined dovetailed to the front of the rib. There is a “U”-notch rear sight which flips up when the rifle barrel is selected using the switch on the top tang. The top-rear of the rib has claw-mounts.

Stock Configuration & Condition: The stocks are two piece checkered walnut with a splinter forend, capped pistol grip, arched comb with European-style cheekpiece, and serrated black plastic Heym buttplate. There is a sling swivel in the belly and another mounted to the bottom of the barrel rib forward of the forend. The stocks have some scattered light nicks, scuffs and scratches with a few small but deeper nicks in the buttstock near the rear and one on the cheekpiece. The finish is thinning in the grip areas, most notable on the forend. The checkering is generally well defined. The is a short, thin crack at the right-rear of the forend. The LOP measures 14″ and 13 1/8″ from the fronts of the triggers to the back of the buttplate. The has light wear with well defined serrations. Overall, the stocks are in Very Good condition.

Bore Condition: The rifle bore is semi-bright with sharp rifling. There is infrequent minor erosion in the bore and a few spots of minor pitting in one of the grooves. The shotgun bores are bright with no erosion.

Overall Condition: This drilling retains about 87% of its metal finish. The blued finish is thinning at all edges. Most of the balance is finish wear along the right shotgun barrel. The left shotgun barrel has some scattered minor wear over the forend and receiver. There are some scattered minor nicks, scuffs and scratches as well as some faint surface oxidation on the barrel assembly. The screw heads range from sharp to lightly tool marked with strong slots. The markings are clear. Overall, this drilling is in Very Good condition.

Mechanics: The action functions correctly. The safety is on the left side of the wrist above the triggers and blocks them when on. The selector switch for the barrels is on the upper tang, and when the switch is pushed forwards into the rifle position, the front sight pops-up. With the rifle barrel selected, the front trigger is used to fire the rifle barrel, but the left shotgun barrel can still be fired using the rear trigger. The front trigger can be set by pushing it forward until it clicks. The barrels lock up with no play. We have not fired this drilling. As with all used firearms, a thorough cleaning may be necessary to meet your maintenance standards.

Our Assessment: This drilling was made by the company Friedrich Wilhelm Heym in 1961 while it was operated by August Heym. August was the third Heym to operate the company which was founded in 1865, with August taking over in 1920 and himself being replaced by Rolf Heym in 1963. The Heym company is one of the few German gunmakers to survive the First World War, the Great Depression, WWII and the partition of Germany during the Cold War. They have a long history of producing quality sporting guns including rifles, shotguns, and combination guns of various configurations. This example is a drilling with two 16 GA barrels, choked Full and Improved Modified, over a 7x57R rifled barrel. The gun features a Dural aluminum alloy frame, helping to stay trim at about six pounds. A distinguishing feature of this gun is its rear sight, which pops-up when the rifled barrel is selected, though the rifle also has provision for mounting an optic to its claw-mount bases. This drilling is in Very Good overall condition and looks like it could be returned to the field for another lifetime’s worth of use. If you’re not looking to hunt, it will also make a nice addition to a collection of classic German hunting guns or drillings, specifically. Please see our photos and good luck!