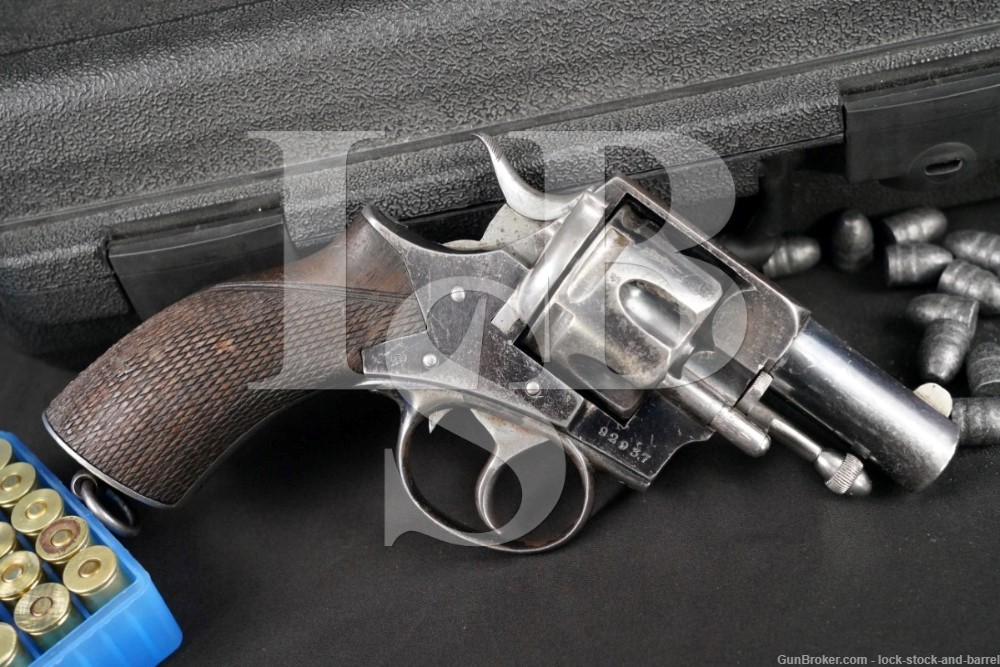 Sights / Optics: This revolver is mounted with a fixed front blade. The rear sight is a notch in the rear of the top strap.

Stock Configuration & Condition: The grip is one piece checkered wood that envelops the back strap. The grip shows several compressions, scrapes, scratches, and nicks. There is staining in the checkering on the left side and back strap. There are no chips or cracks. The checkering shows moderate wear with some interruptions and is well defined. The grip rates in about Fine overall condition as Antique.

Bore Condition: The bore is mostly bright and the rifling is worn yet defined. There is some scattered light erosion in the bore .

Overall Condition: This pistol retains about 30% of its metal finish. There are several scattered nicks, dings, small marrs, and scratches scattered throughout the metal surfaces. The leading edges have thinned considerably and there is significant finish loss on the left side of the frame, trigger guard, and front strap. There is intermittently scattered light erosion. The screw heads range from sharp to slightly disfigured with serviceable slots. The markings are clear. Overall, this revolver rates in about Very Good condition as Antique.

Mechanics: The action functions correctly. The cylinder locks up with no perceptible play when the trigger is depressed. We did not fire this revolver. As with all previously owned firearms, a thorough cleaning may be necessary to meet your maintenance standards.

Box, Paperwork & Accessories: This revolver comes in a black hard case with 13 loaded rounds of .450, an additional 15 brass shells, and a bag with several additional pieces of .450 lead.

Our Assessment: Stated beautifully by College Hill Arsenal, “In 1867, P. Webley & Son introduced a double action, center fire, solid frame revolver that would become known as the Royal Irish Constabulary model (R.I.C.). These revolvers were made available in a variety of calibers and barrel lengths, and derived their name from being adopted by the newly established Royal Irish Constabulary in 1868. The gun initially had no model or year designation, and was known simply as the Royal Irish Constabulary model, however as improvements were made in the design a system of separating the models had to be developed. Although it is unclear if the Webley’s used this system, for all practical purposes these earliest R.I.C. guns are Model 1867 revolvers. Their initial offering was in .442 Mark I (the same size as 54 bore from the old percussion days), but eventually the model would be offered in .450, .476/.455, .455/.450, and .430 as well as the American calibers of .44 WCF (.44-40) and .45 Colt. The guns had six shot “plain” cylinders, without flutes, that were loaded through a hinged gate in the right side of the frame. Empty cartridges were ejected via a swiveling ejector rod that was stored in the hollow center of the cylinder arbor pin. The fact the guns were so successful with the new Irish police force resulted in other Commonwealth police agencies acquiring the guns as well. The R.I.C. model was adopted by the London police force, as well as many other English and Australian state police forces as well. The model proved equally popular throughout the British Empire. To capitalize upon the revolver’s popularity with police, Webley released an updated version of the gun in 1880, the Model 1880 R.I.C. and Metropolitan and County Police No 1. This gun had an improved lock work and ejector system and was made with a 2.5” barrel to aid in concealment. The English policy of the time was for most “metropolitan” or city police to be unarmed and those in rural areas to be armed with long guns as needed. The guns were chambered for the .450 Boxer (also known as .450 Adams) cartridge. To further capitalize upon the “Police” use and designation, the firm stamped the left side of the frame, forward of the cylinder, with a pair manacled hands, over the initials M.P. for “Metropolitan Police”. Those revolvers taken into service with police forces were typically marked with a police inventory number and in the case of some departments, additional identifiers. In 1883, Webley introduced another improved version of the R.I.C., the Model 1883 or Webley’s R.I.C. New Model No 1. This was the first of the R.I.C. series to have a fluted cylinder. The gun also included further refinements to the lock work and the ejector rod system. This model was officially adopted by the London police department and numerous “Metropolitan Police” versions of the New Model No 1 were sold in .450 with 2.5” barrels to Commonwealth police forces around the globe.” On display here is a New Wales Police marked R.I.C. No. 1 that is in about Very Good condition as Antique with great mechanics and a respectable bore. It retains beautiful crisp markings and belongs in any respectable revolver collection. Please see our photos and good luck!