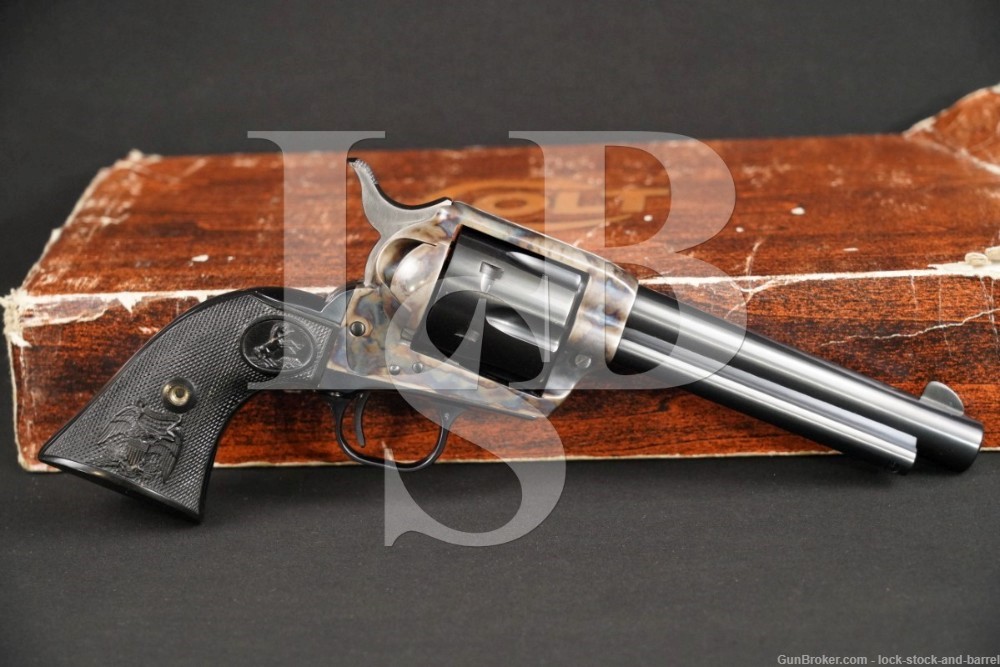 Stock Configuration & Condition: The grips are two-piece checkered black hard rubber with rampant colt in oval at the top and American Eagle at the bottom of each panel. The right panel has a light scratch on the bottom near the front. The left panel has a few light nicks in the border around the rampant colt and a few more notable nicks and scratches on the bottom. The checkering is sharp with good detail in the colts and eagles. There are no chips or cracks. Overall, the grips are in Fine condition.

Overall Condition: This handgun retains about 97% of its metal finish. There are some minor nicks and scuffs on the butt, the bottom of the trigger guard, the left of the barrel at the muzzle-end and around the outside of the cylinder. There are a few spots of very minor surface oxidation in the backstrap and in the unfinished side faces of the hammer near the tip of the spur. The screw heads are sharp. The markings are clear. Overall, this handgun rates in Fine condition.

Box, Paperwork & Accessories: This revolver comes in a faux-wood cardboard Colt box with two-piece styrofoam insert. The box has scattered storage wear with all of the ears missing.

Everyone should have a Colt Single Action Army, and this would be a beauty to add to any collection. Manufactured in 1979, this revolver is in Fine condition, appearing to have seen little use, though it shows some minor storage wear. With a 5 1/2″ barrel and chambered for .357 Magnum, this is a classic Single Action Army chambered for a more modern magnum cartridge. This makes it suitable for addition to a collection, but is also something that could be carried as a hunting sidearm or used in Cowboy Action Shooting competitions. Please see our photos and good luck!