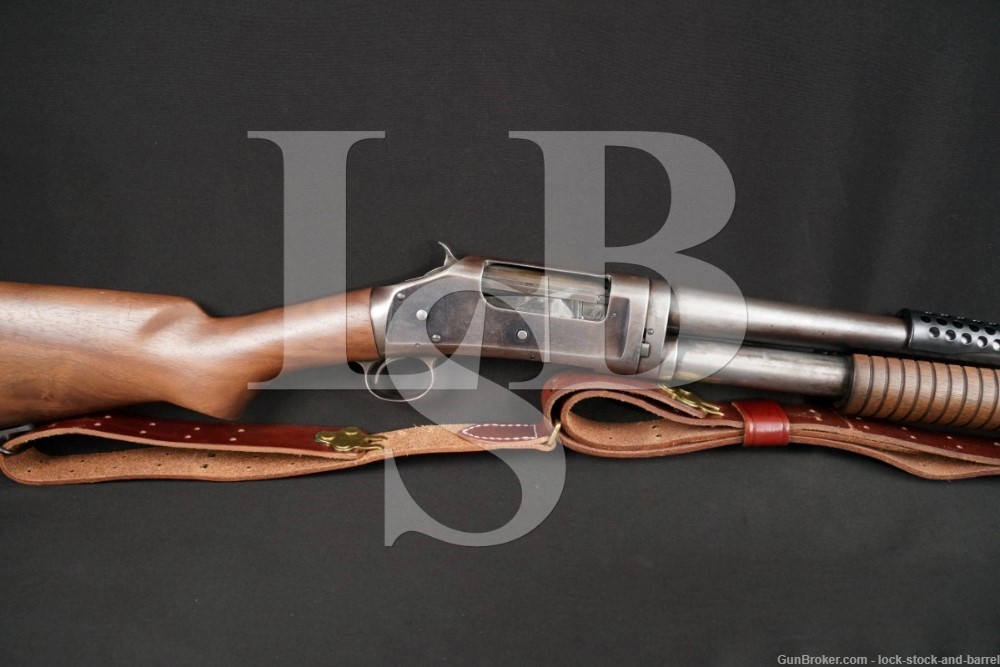 Markings: The top of the barrel is marked “MANUFACTURED BY THE WINCHESTER REPEATING ARMS CO. NEW HAVEN. CONNECTICUT. U.S.A.” with patent dates, “12 GA.” and “FULL”. The top of the barrel at the rear and the top of the receiver to the left of the sighting groove are each marked with an ovalled “WP” proof. The bottom of the receiver and barrel extension are each marked with the serial number. The action bar is marked “MODEL 1897 / -WINCHESTER- / TRADE MARK REG. U.S. PAT. OFF.”.

Barrel Length: The barrel has been cut to 22″

Sights / Optics: There is a brass bead at the front of the installed bayonet lug/heat shield assembly and the top-front of the receiver has a groove which serves as a sighting plane.

Stock Configuration & Condition: The stocks are two-piece walnut with grooved slide handle, semi-pistol grip, straight comb, and serrated black plastic Boyd buttplate. A sling plate has been installed in the belly of the buttstock (there is another sling swivel mounted to the bayonet lug assembly. The forend has minor handling wear with a few light marks, most notable on the left in the second and third grooves from the rear at the top. The buttstock has a few light nicks in the front of the grip and on the comb near the front. There are no chips or cracks. The LOP measures 13 3/4″ from the front of the trigger to the back of the buttplate. The plate has minor wear with well defined serrations. Overall, the stocks are in Very Good-Fine condition as not original to the gun.

Bore Condition: The bore is semi-bright. There is some light erosion, infrequent light pitting and there are minor lumps in the bottom of the bore at the location of the mounting screws for the bayonet lug assembly.

Overall Condition: This shotgun retains about 30% of its metal finish. The finish is thinning at all edges. Strongest finish is in the receiver flats and the front of the magazine tube. Other surfaces have remaining finish mottled with finish wear, areas going to a light patina and some areas worn to white. There are several scattered light nicks, dings, scuffs and scratches with some minor surface oxidation. The screw heads range from sharp to disfigured with usable slots. The markings range from clear to worn, but legible. Overall, this shotgun is in about Good-plus condition as customized.

Mechanics: The action functions correctly. The trigger is crisp. This shotgun will slam-fire as designed. We did not fire this shotgun. As with all used firearms, a thorough cleaning may be necessary to meet your maintenance standards.

Our Assessment: The Winchester 1897 was designed by the famed John M. Browning and quickly became one of the most popular shotguns in the world, serving the United states military in both World Wars and popular with law enforcement agencies across the country. It should come as no surprise then, that it was also popular on the civilian market with many field guns produced. This example is a takedown model made in 1915 which has been modified to a Trench Gun-style configuration. The barrel was cut back to 22″ and a heat shield/bayonet lug assembly installed. The buttstock has been replaced with a sling plate installed for use with the included sling. The gun shows wear consistent with use as a field gun over the last century before conversion and now will make a nice addition to a collection or even home defense gun. Put a 17″ blade on the end of this thing, and whatever you’re defending yourself against will have second thoughts! Please see our photos and good luck!