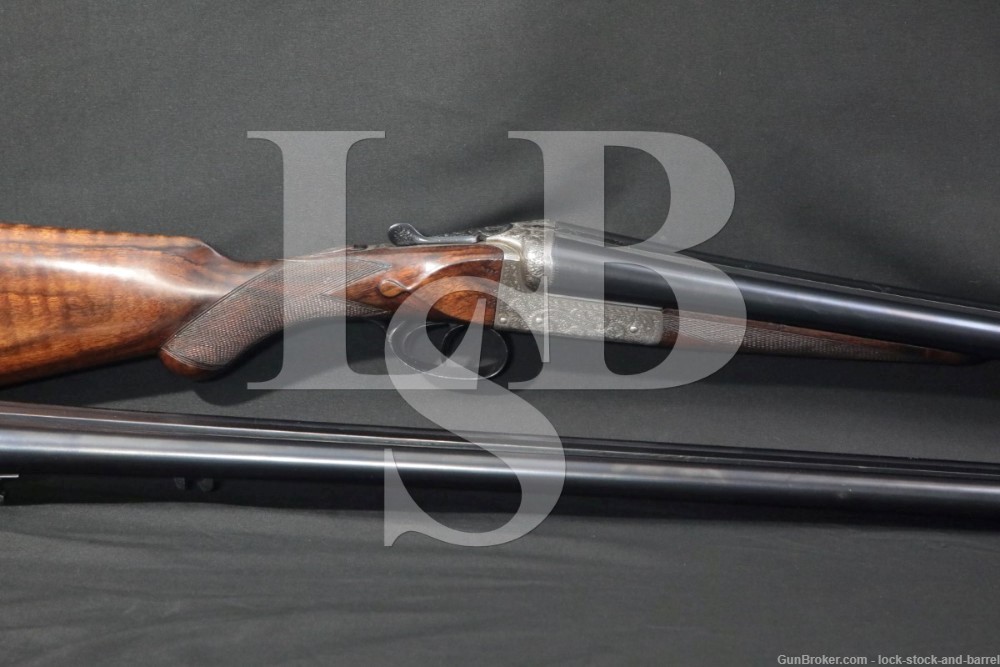 Action Type: Boxlock Break-Open Side by Side Double Trigger Shotgun with Extractors

32″ Barrel Set- Both Full, Both Fixed

Stock Configuration & Condition: The stocks are two piece checkered walnut with splinter forend, semi-pistol grip, teeardrop cheeks, initial plate inlaid in the belly, straight comb and serrated bare butt. The stocks have scattered light nicks, scuffs and scratches. There are a few minor losses around the top edges of the forend. There are no cracks. the checkering is well defined. The LOP measures 14 3/8″ and 13 5/8″ from the fronts of the triggers to the back of the butt. The butt shows wear at the heel and toe with well defined serrations. The drop at comb is approximately 1 1/2″, drop at heel 2 1/4″. The stock is cast off. Overall, the stocks are in about Very Good condition.

Finish Originality: Refinished, the 28″ barrel set is not original to the gun and was likely not made by J.&W. Tolley (see Our Assessment)

28″ Barrel Set: The bores are mostly bright. There is no erosion but there is some stubborn fouling at the muzzle-ends.

32″ Barrel Set: The bores are semi-bright. There is some scattered light erosion and minor pitting.

Overall Condition: This shotgun retains about 97% of its metal finish. There are some scattered minor nicks and scuffs, but the finish is strong. The guard has some light erosion under the finish. The barrel flats of the 28″ set have some minor surface oxidation and there is infrequent faint surface oxidation in the receiver’s coin finish. The screw heads are tool marked with strong slots. The pin heads range from unmarred to slightly peened. The markings are generally clear, some of the proofs are worn and incomplete, likely applied before final polish and finish. Overall, this shotgun set is in Very Good-Fine condition as refinished and assembled.

Mechanics: The action functions correctly. The safety engages automatically when the lever is pushed to the side. Both barrel sets lock up with no play to the receiver. We have not fired this shotgun. As with all used firearms, a thorough cleaning may be necessary to meet your maintenance standards.

Our Assessment: Founded by James and William Tolley in 1858, J.&W. Tolley would go on to become quite the successful gunmaking firm. Initially, the brothers worked out of Birmingham producing inexpensive sporting guns primarily aimed at the African market. They would progress to make firearms of such fine quality that they were appointed as gunmakers to the King of Portugal as well as the Royal Family of Persia. Around 1904 they expanded their operations into London. The elder brother James would die in 1916, but the company would live on and continue making firearms through 1955. This example of their work was most likely made after the passing of the elder Tolley and is a beautiful boxlock shotgun originally made with 32″ barrels chambered for 3″ 12 gauge shells. At some point, a second 28″ barrel set was made for the gun, having been proofed in 1986, well after the Tolley factory had closed, making it likely that this barrel set was sourced from a different maker, but marked to match the original barrel set. The gun has been refinished, so it looks quite good for its age and the second barrel set makes for quite a versatile hunting gun. This will make a great addition to any collection, especially for one who can appreciate a finely crafted British double gun. Please see our photos and good luck!