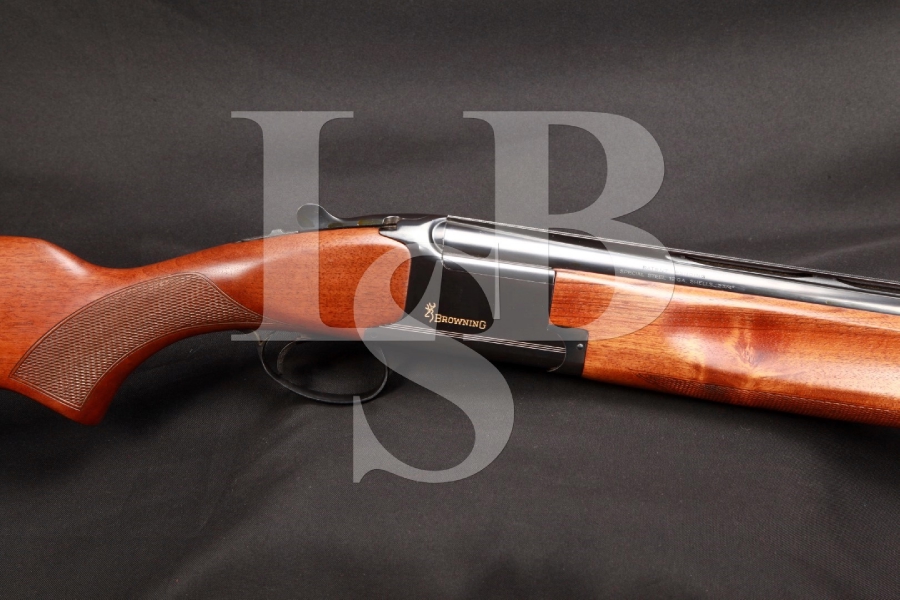 SOLD FOR:$1,130.97
Make: Browning (Fabrique Nationale Herstal)
Model: Liege B26 /27 (we determined the year of manufacture to be 1981, making this shotgun fall between the B-26 and B-27. the B-27 was not cataloged)
Serial Number: L13PZ02317
Year of Manufacture: 1981 (PZ date code)
Gauge: 12 Gauge, 2 ¾” Shells
Action Type: Top Lever Break Over/Under (O/U) with Single Selective Trigger and Ejectors
Markings: The left side of the upper barrel is marked “BROWNING ARMS COMPANY MORGAN, UTAH & MONTREAL P.Q. / FABRIQUE NATIONALE HERSTAL / MADE IN BELGIUM” followed by “CHROME”, an “A” with a cross over it, a “PV” proof mark, “12w-70” in an Omega and “18 4”. The left side of the lower barrel has a stylized “J”, an enclosed “1Kg 504”, a “PV” proof mark, “12w-70” in an Omega and “18 4”. The lug that retains the forearm is marked with a “T”, “T” and “0”. There are a whole series of inspection marks on the underside of the monobloc and “YY” on the underside of the barrel just ahead of it. The right side of the upper barrel is marked “PATENT PENDING / SPECIAL STEEL 12GA. SHELLS_2 ¾”” and the right side of the lower barrel is marked “02317”. The right side of both barrels are marked “**$” to denote Skeet choke. There is a “Z” above the forward barrel lug on the right side of the monobloc. The forearm seems unmarked. The inside of the receiver is marked with a “PV” proof mark and “2317”. The upper tang is marked “L13PZ02317”. There is a Browning Buckmark on the trigger guard and “BrowninG” preceded by a Buckmark on each side of the receiver.
Barrel Length: 28”
Choke: Skeet (**$) and Skeet (**$)
Sights / Optics: This shotgun is mounted with an orange fiber optic front sight on a 9/16” wide ventilated rib.
Stock Configuration & Condition: The stocks are checkered walnut. The forearm and pistol grip checkering is unmarred. The only notable marks are a few compression marks on the belly of the buttstock. There are no chips, cracks or scratches in either stock; only some light handling marks. The LOP measures 13 ½” from the front of the trigger to the back of the White Line black ventilated rubber recoil pad. The drop at the comb is about 1 ½” and the drop at the heel about 2 3/8”. The stocks rate in about Excellent overall condition.
Type of Finish: Blue
Finish Originality: All Original
Bore Condition: The bores are bright. There is no erosion.
Overall Condition: This shotgun retains about 99% of its metal finish. The balance of the finish shows light handling marks. The markings are clear. Overall, this shotgun rates in about Excellent condition.
Mechanics: The action functions correctly. The tang safety (up and down) is also the barrel selector switch (left and right.) This shotgun has a mechanical trigger. We have not fired this shotgun.
Box, Paperwork & Accessories: None
Our Assessment: This Browning Over/Under 12 gauge was made by FN after the Browning Superposed was largely discontinued. It was designed prior to the Japanese manufactured Citori. Although made primarily for the European market, some were imported to the United States. We believe this example was made for the U.S. as photos we have seen of the European models have sling swivels, and because an extra line on the barrel is marked “BROWNING ARMS COMPANY MORGAN, UTAH & MONTREAL P.Q.” In the Model Section above is a link to a discussion regarding another shotgun similar to this one, including a response from a representative of the Herstal Group authenticating the shotgun under discussion in that forum. It would appear these shotguns are both a Liege B26 made in the early 1980s. Our example is in exceptionally nice condition, apparently having seen little use and careful storage. The wooden forearm is released by depressing a “U” shaped button located in the front of the forearm, just below the barrels. The lack of a visible and normally placed forearm release gives this shotgun a very subtle, clean look. These Browning Liege shotguns are rare here and this one is sure to turn a few heads at the Skeet fields.