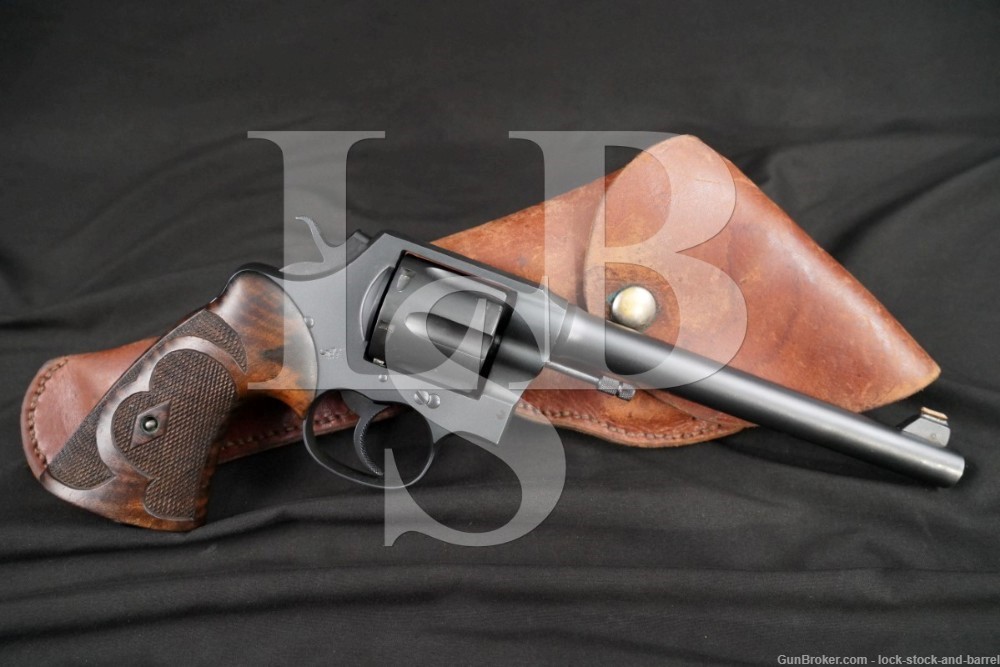 Sights/Optics: The front sight is a beaded blade integral to a serrated, ramped base fixed to the front of the barrel. The rear sight is a square notch in the topstrap. The sides of the groove in the topstrap are serrated for glare reduction.

Stock Configuration and Condition: The grips are two-piece custom checkered and carved select walnut. The grips have a few light nicks and scratches in the sides with several minor nicks on their bottom faces. The checkering is generally sharp. There are no chips or cracks. Overall, the grips are in Fine condition as not original to the gun.

Finish Originality: Refinished. The hammer and trigger have either been modified or replaced. The front sight is not original to the gun.

Overall Condition: This revolver retains about 97% of its current metal finish. The finish is generally strong throughout, thinning at some edges. The barrel has some scuffing on each side at the muzzle-end and the action shows minor operational wear. There are a couple of spots of minor discoloration, the most notable on the right of the frame at the bottom-front. There is a spot of pitting under the finish on the right of the frame in front of the grip and there is some pitting under the finish on the grip frame, concealed by the grips when installed. The screw heads are sharp. The markings are clear. Overall, this revolver is in Fine condition as refinished and customized.

Box, Paperwork, and Accessories: This revolver comes with a leather flap holster.

Our Assessment: The New Service revolver entered production in 1897 and was the first Colt double action revolver with a cylinder rotation to the right. The New Service was available in various calibers, but when the Army decided to adopt it in 1909, they were looking for a man-stopper to replace their New DA Army revolvers that gained such a poor reputation in the Spanish American and Philippine-American wars. The result was the .45 Colt chambered Model 1909. After the Army switched to the Model 1911 semi-auto, they wanted revolvers in the same caliber for WWI, and the Model 1917 New Service was adopted, chambered in .45 A.C.P.

In addition to their fixed-sight military and commercial offerings, the New Service was also offered in a Target configuration, with a flat top-strap and adjustable target sights. This example has a little bit of both. Its frame is a standard model frame with a fixed rear sight. The barrel has had a beaded blade front sight installed. The trigger and hammer have either been modified or replaced, each having fine checkering with a pronounced curve to the hammer spur. The gun has been refinished at some point, so it looks good for its age, and it retains a great bore and strong mechanics. Rounding out the customization is a beautiful set of checkered and carved target stocks.

Someone put a lot of work into this revolver, and it appears as though it has plenty of use left in it. For those who have an interest in a robust revolver chambered for a potent cartridge, this will be a lot of fun on the range. For the collectors, it is an interesting example due to its customization, but could also be restored to a proper Target or Standard Model. Good luck and happy bidding!