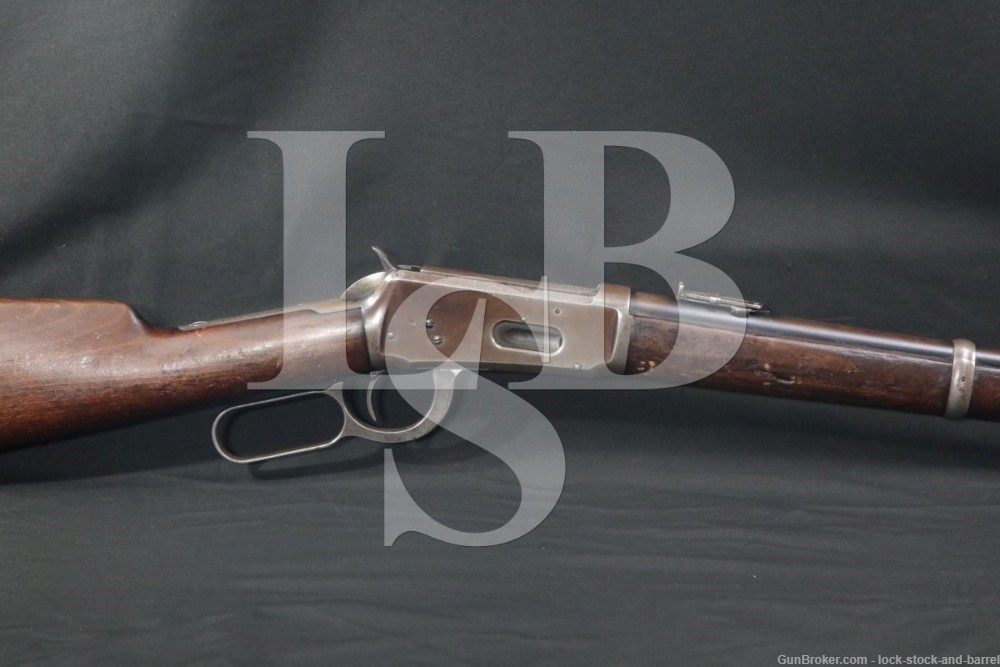 Sights / Optics: The front sight is a blade pinned in a slotted base fixed to the front of the barrel. The rear sight is a folding ladder-style sight dovetailed to the rear of the barrel. When folded down, it presents a “V”-notch. The ladder has a “V”-notched slider and is graduated from 0-2,000 yards. The top tang is drilled, tapped and filled for a tang sight (none present).

Stock Configuration & Condition: The stocks are 2-piece smooth walnut with banded forend, straight grip, straight comb, and carbine-style steel buttplate. The stocks have several scattered light-moderate nicks, dings, scuffs and scratches, a few have damaged portions of the surface wood. There is a gouge in the right of the forend. There is a crack in the right-front of the forend. The LOP measures 12 7/8″ from the front of the trigger to the back of the buttplate. The plate has worn to white with scattered discoloration from oxidation, a few spots of solid erosion, some nicks and scratches. Overall, the stocks are in Good condition as refinished.

Bore Condition: The bore is dark. The rifling is worn, but visible. There is moderate erosion throughout the bore.

Overall Condition: This rifle retains about 35% of its metal finish. The barrel has strong finish on the bottom and some around the sights. The magazine tube has generally strong finish with scattered minor scratches and infrequent minor surface oxidation. The receiver has some finish remaining around the saddle ring, around the hammer and in the bottom tang. Other surfaces have mostly gone to a light-moderate patina. There are scattered light nicks, scuffs, scratches and there is wear on the left receiver flat from the saddle ring. There are spots of light surface erosion and infrequent spots of minor erosion. The action shows operational wear. The screw heads range from sharp to tool marked with strong slots. The markings are clear. Overall, this rifle is in Good condition.

Our Assessment: This is a Pre-64 Winchester Model 1894 Saddle Ring Carbine made in 1906 with a 20” round barrel chambered in .38-55. The .38-55 Winchester cartridge, also known as .38-55 WCF and .38-55 Ballard, was introduced in 1876 by Ballard. It was used by Marlin Firearms from 1875 on for various single-shot target rifles and their 1893 lever-action rifle. It was later offered by Winchester in its Model 1894. Winchester continued to use the round in various rifles until about 1940, and also used it in a few commemorative editions of rifles since then. This example is in Good condition with about 35% of its metal finish remaining and wear consistent with a rifle that has seen use in the field over the last century, likely with much of it using black powder based on the bore. This is an honest rifle for its age and still retains strong mechanics. It would be a nice addition for the Winchester collectors, most of the SRCs we see are chambered for one of the .30-30 family of cartridges. It would also be well worth restoring and getting back out in the field. Please see our photos and good luck!