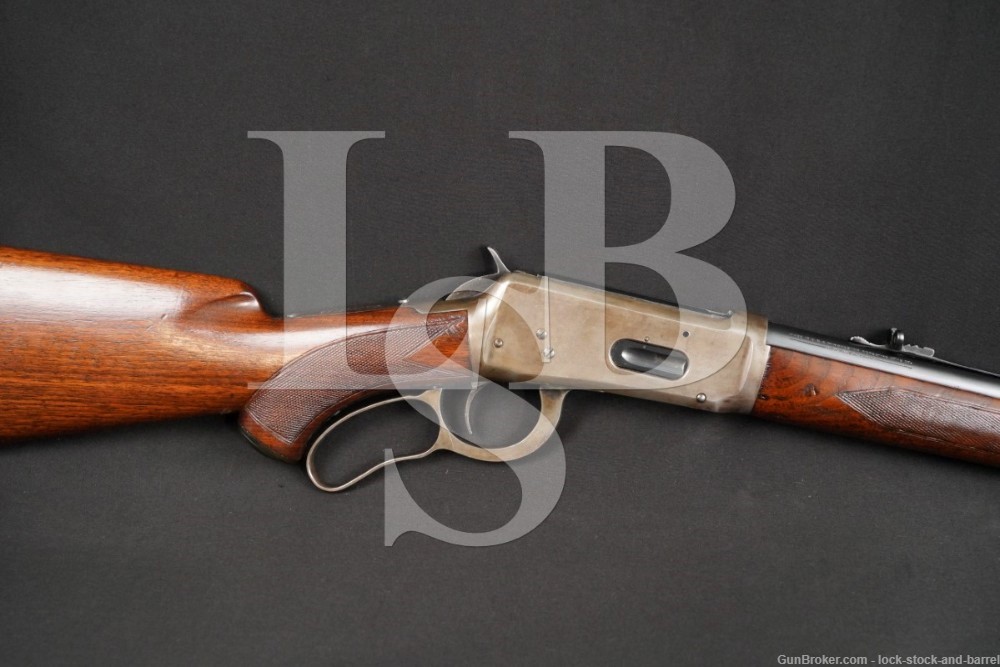 Sights / Optics: The front sight is a beaded blade dovetailed into a raised finely stippled ramp that is fixed to the barrel. The bead has been painted red. The base is grooved for a hood which is not present. The rear sight is a “U” notched semi-buckhorn elevator sight that is dovetailed into the barrel with the notch fine-adjustable for elevation and a spot of gold paint under the notch. The left side of the receiver has two drilled, tapped and filled holes for a receiver sight (none included). The top tang is drilled, tapped and filled for a tang sight (none included).

Stock Configuration & Condition: The stocks are two-piece checkered walnut with semi-beavertail forend, capped pistol grip, straight comb, checkered steel shotgun-style buttplate and a sling-plate mounted in the belly (the other is integral to the nosecap. The stocks have light handling wear with scattered light nicks, scuffs and scratches. The forend has a tiny chip-loss at the top-front corner on the left. There are no cracks. The checkering is well defined. The LOP measures 13 1/8″ from the front of the trigger to the back of the buttplate. The plate has gone to a light patina with scattered light wear and well defined checkering. Overall, the stocks are in about Very Good condition as refinished.

Finish Originality: The barrel inish is original. The receiver has the milky-gray color of cold-blue.

. Bore Condition: The bore is bright and the rifling is sharp. There is no erosion in the bore. Our bore gauge measures a ME of about 1.25.

Overall Condition: This rifle retains about 70% of its metal finish. The barrel and magazine tube have strong finish with infrequent minor surface oxidation. The magazine tube has some light scraping on the left. The nosecap, lever and receiver have a milky gray coloring indicating cold-blue mottled with light discoloration from oxidation. There are some scattered light scratches and nicks. The top tang has light wear from a previously installed tang sight. There is some blue remaining on the rear of the lever-plate and the front of the bottom tang. The screw heads range from sharp to lightly disfigured with useable slots. The top tang screws are not original to the gun. The markings are clear. Overall, this rifle is in about Very Good condition as partially refinished.

Mechanics: The action functions smoothly and correctly, and the trigger is crisp. This rifle has lever and half-cock hammer safeties. We did not fire this rifle. As with all used firearms, a thorough cleaning may be necessary to meet your maintenance standards.

Our Assessment: This is a Winchester Model 64 Rifle in .30-30 Win. with a 24 1/4” barrel and ¾ length magazine tube. The rifle is a 64 Deer Rifle, the deluxe version with checkered stocks, capped grip and sling mounts front and rear. In about Very Good overall condition as partially refinished, this rifle retains about 70% of its original finish with the receiver and lever having been treated with cold-blue at some time in the past. The bore is bright with sharp rifling and no erosion. Our bore gauge measured a ME of 1.25, indicating fairly light use over the last 85 years. Winchester’s venerable Model 94 rifle, long a favorite of hunters and outdoorsmen, was beginning to lose sales in the early 1920’s, although the shorter barreled carbine was still popular. More people were traveling by motorcar and railroad, and Winchester thought a takedown rifle based on the Model 94 would sell well. The Model 55 was introduced in 1924, but never sold particularly well, and was discontinued in 1932 when it was superseded by the Model 64. The Model 64 was a redesign of the Model 55 with a longer magazine tube and made with a solid frame only. The Model 64 stayed in production until 1957, with a total of only 66,783 manufactured, making it one of the rarer lever action models made by Winchester. A 2nd batch of 8250 was produced in the early 1970’s, but those made before 1964 have better quality and smoothness of operation than that found on more modern Model 94’s. We expect the Winchester collectors to be very interested in this rifle, especially being quite early in production of the Model 64 and being the deluxe variant. If the collectors don’t take enough notice, this will make someone a very nice deer rifle. Please see our photos and good luck!