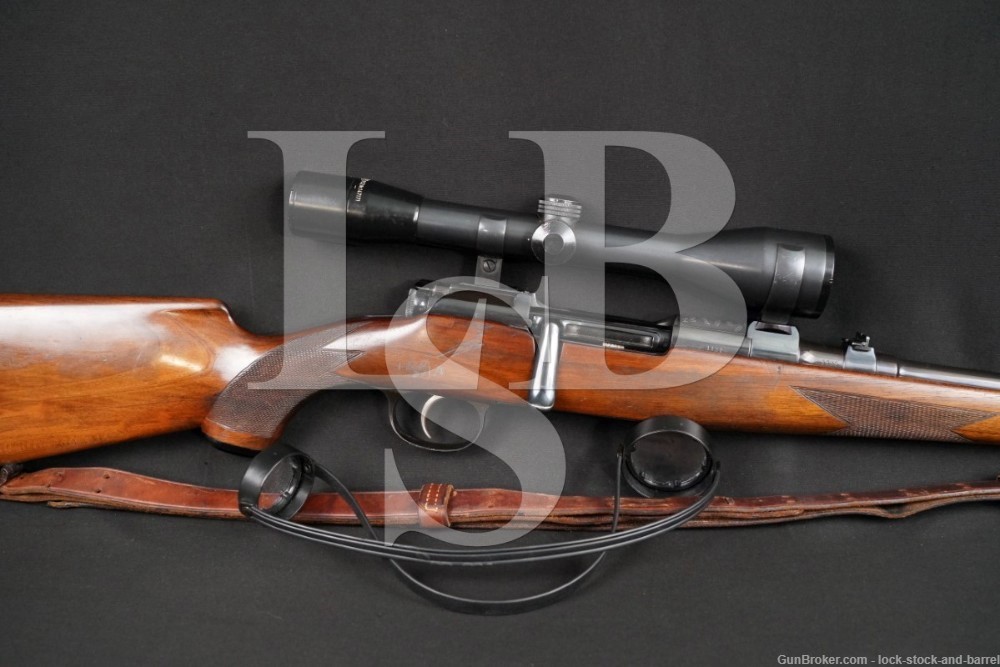 Sights / Optics: The front sight is a beaded blade dovetailed to a hooded, ramped, checkered base . The rear sight is a fixed “U” notched blade set into a barrel mounted base. A second blade flips up to sight farther distances. The flip up blade is marked “300”. There are claw-mount bases mounted to the chamber-ring and the left-rear of the receiver for the installed Kahles Helia-Super 6S2 6x scope with German post reticle. The scope has some light handling wear with clear glass.

Stock Configuration & Condition: The stock is a checkered walnut Mannlicher-style full stock with nosecap, capped pistol grip, straight comb with European-style cheekpiece, serrated black composite buttplate and sling swivels front and rear. The stock has some scattered light nicks, scuffs and scratches. There is more notable scraping and dings on the right below the rear of the receiver. There is a fill on the top-right edge below the rear of the receiver, likely originally inlet for a receiver sight. There is a small loss at the top edge of the bolt-handle inlet. There is a patch-repair on the top-left edge below the front half of the receiver. The checkering is well defined. The LOP measures 14 1/8″ from the front of the trigger to the back of the buttplate. The plate has scattered light wear and well defined serrations with notable erosion on the heads of its mounting screws. Overall, the stock is in Very Good condition as refinished, repaired and not original to the gun.

Overall Condition: This rifle retains about 95% of its current metal finish. The barrel and receiver have minor wear along the stock-line, a few light nicks and scuffs, and there is wear on the front sight base from the hood. The trigger guard and floorplate have a few light nicks and scratches. There is some oxidation at the seam between the front scope mount collar and the receiver and there are spots of erosion under the finish on the left-front of the receiver. The left of the receiver has had four holes blind-filled and blended, likely from a previous scope mount. The action shows operational wear. The screw heads range from sharp to tool marked with strong slots. The markings are clear, some have soft edges. Overall, this rifle is in Very Good-plus condition as refinished.

Box, Paperwork & Accessories: The rifle comes with the installed scope as described. A brown leather Stoeger sling is included.

Our Assessment: This Mannlicher-Schoenauer Model 1950 rifle was made in Austria back in 1950, the year this model was introduced. The rifle looks like it has had quite a history and was well cared for. Its stock has been replaced with another M-S stock which has had some repairs which appear to be from previous sighting options. The receiver also previously had a side-mount of some sort which has been quite skillfully filled. The rifle now sports a vintage Kahles 6S2 Helia-Super scope. The result is a rifle with a classic Mannlicher-Schoenauer appearance, and having been refinished it looks great for its age. Despite these signs of use and modification, the rifle retains a great bore and strong mechanics. It ought to still be a great hunting rifle for lifetimes to come and would be a neat addition to a Steyr collection. Please see our photos and good luck!