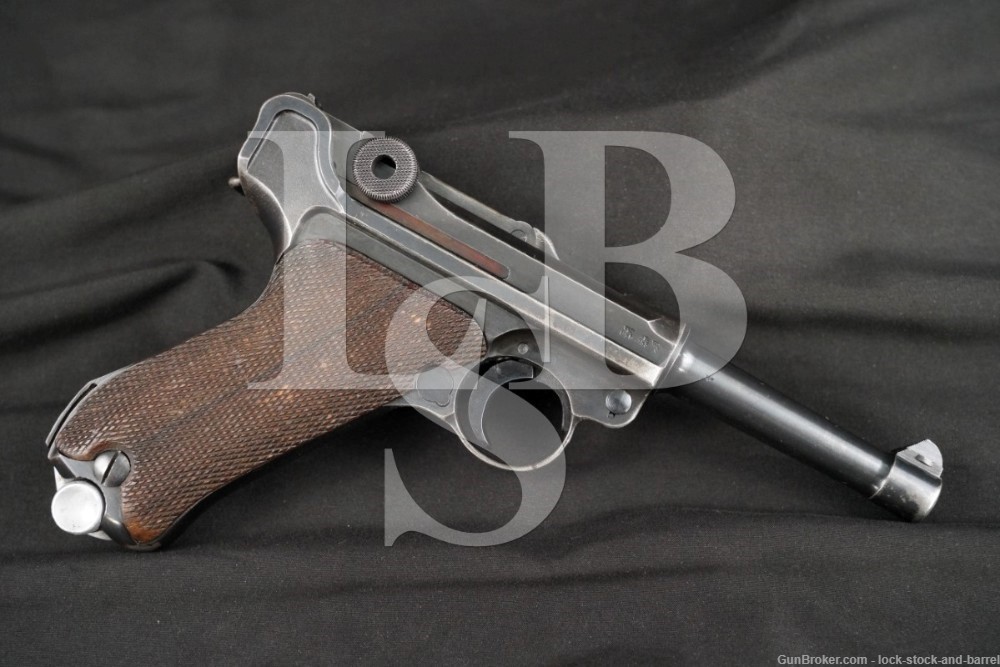 Stock Configuration & Condition/ Grip: The grip panels are two-piece checkered wood. The grip panels have some light handling marks, nicks and scuffs. There is light wear surrounding the screw slots and scattered dark discoloration. There is a light chip at the top of the left grip panel (it is visible when the panel is removed from the frame). The checkering remains sharp. Overall, the grips are in Very Good condition.

Overall Condition: The pistol retains about 70% of its metal finish. There are some light-moderate handling marks, nicks and scuffs on the gun’s metal surfaces. Notably, there is finish loss along the leading edges, light wear around the muzzle, some moderate wear in addition to some light pitting on the trigger side-plate and some light pitting on the left side of the barrel and frame. Some of the marks are poorly stamped but most remain clear. The screwheads have only light handling wear and remain serviceable. Overall, the pistol is in Very Good condition.
Mechanics: The action functions correctly. There is barely palpable play between the barrel assembly and frame. We did not fire this pistol. As with all used firearms, a thorough cleaning may be necessary to meet your maintenance requirements.

Box Paperwork and Accessories: The pistol comes with a single magazine. The magazine’s markings are described above and it is not serial matched. There is some light-moderate handling wear on the magazine including some light pitting but it remains in Very Good condition.

This Luger appears to largely be in its original configuration with only one possibly replaced part. The trigger side-plate has a different serial number on its concealed end, this could be the result of a factory issue or it may have been replaced in the field. The Luger was manufactured in 1940, the most successful year of WWII for the Wehrmacht. The Germans conquered Central Europe before advancing on France which was defeated in a matter of six weeks, the Whermacht repeatedly defeated the British Expeditionary Force over the course of the year (remembered as the BEF, early in the conflict it was derided as the Back Every Friday force in Britain due to its repeated setbacks in the field). This Luger has handling wear associated with a firearm that has seen some action, but the gun retains its unique aesthetic. The gun remains both an ergonomic and mechanically sound handgun, it is one of the best military side-arms ever developed after all. This is a great option for fans of historical firearms. Good luck on your bid!