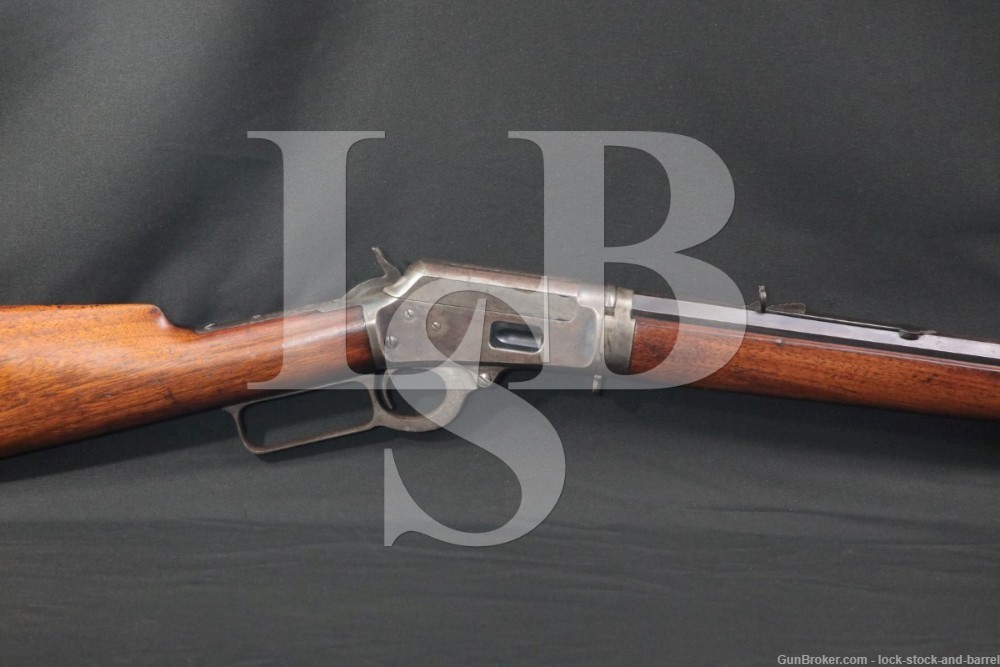 Stock Configuration & Condition: The stocks are two-piece smooth walnut with a capped forend, straight grip, and a steel crescent buttplate. There are several nicks, scratches, gashes, and compressions. Some of the more notable of these can be viewed on the left side of the forearm, top of the comb, and right side of the buttstock. There is very light play between the forearm and metal. There are no chips or cracks visible. The LOP measures 13 1/8” from the front of the trigger to the rear of the curved steel buttplate, which shows scattered erosion throughout. The stocks rate in about Very Good-Fine overall condition as Antique.

Bore Condition: The bore is somewhat bright and the rifling is slightly rounded yet sharp. There is scattered erosion throughout.

Overall Condition: This gun retains about 70% of its metal finish. There is some infrequently scattered pitting and pinprick erosion, primarily on the barrel. There are some nicks, dings, and scratches dispersed about the surfaces. The case colors are still slightly present on the sides of the receiver, though has been mostly overcome by erosion and patina. The finish on the leading edges of the barrel has thinned. The nose cap shows a mottled patina appearance. The screw heads are serviceable though a bit worn. The markings are clear. Overall, this gun rates in about Very Good-Plus condition as Antique.

Mechanics: The action functions as correctly. We have not fired this rifle. As with all previously owned firearms, a thorough cleaning may be necessary to meet your maintenance standards.

Our Assessment: The Marlin lever actions are often forgotten, especially next to the Winchesters, but they shouldn’t be. Marlin was there, building great quality and reliable rifles alongside Winchester and in the glory days of American Manufacturing. Both on the frontier, and even today, many prefer the Marlin to a Winchester. This gun is an important piece in firearms history, in American history and will be an important piece in your collection. This particular gun is a takedown Model 1894, a must have in any Marlin lever action collection. This rifle is an early example from 1895 and has obviously been well cared for over its 127 years of existence. You’d best drop a bid on this beauty!