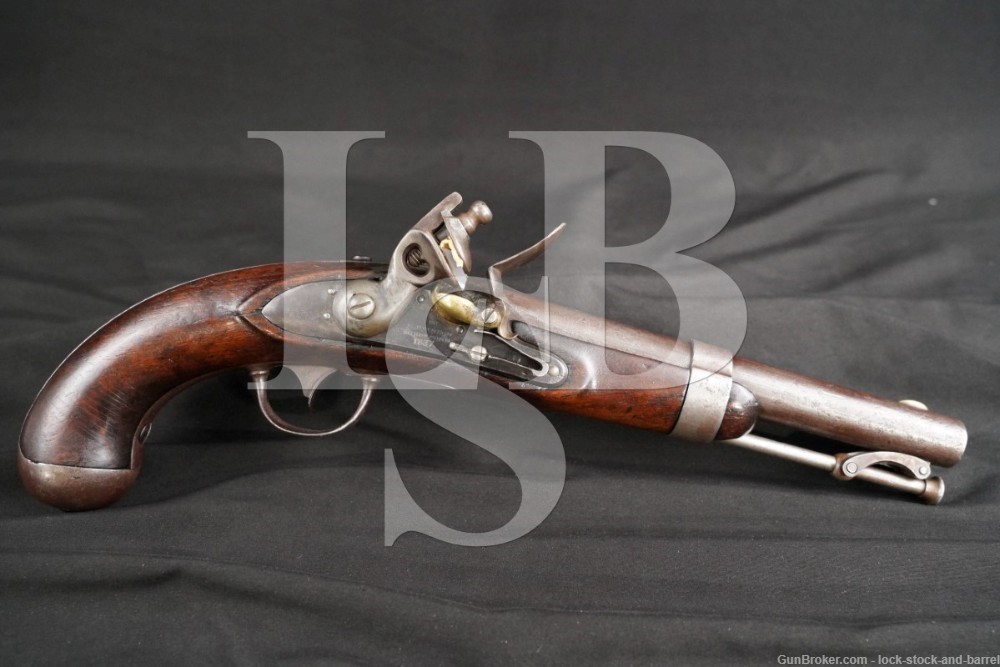 Markings: The lock-plate is marked “US / R. JOHNSON / MIDDN CONN / 1837”. The breech is marked “US / TW / P” inspection marks. There is a faded cartouche on the left side of the stock.

Sights/ Optics: The front sight is a brass blade fixed by the muzzle. The rear sight is a “U”-notch fixed to the top tang.

Stock Configuration & Condition/ Grip: The stock is one-piece wood featuring a captive-swivel ramrod that has a slot in the forend, a barrel band which has a strap extension which joins with the side-plate, a lock-plate, and a pistol grip with a back-strap integral with the butt-cap. The stock has light handling marks, nicks and scuffs. Notably, there is a light crack between the side-plate’s top screw and the breech. Also, there’s a patch of finish loss between the top tang and lock in addition to a light crack at the rear of the lock-plate. Overall, the stock is in Very Good condition for an Antique.

Type of Finish: Bright, Case Color and a Brass flash-pan

Bore Condition: The bore is dark and coated in moderate erosion.

Overall Condition: The pistol retains about 3% of its metal finish. The brass pan on the lock-plate still retains some of its finish but is mostly tarnished with scattered patches of oxidation and verdigris. The case colored lock-plate and hammer have lost almost all their coloring and are coated in oxidation, now they have a patina color. The bright parts of the gun are coated in light-moderate surface oxidation and have taken a patina color. There are some scattered light handling marks, nicks and scuffs. There are a few patches of light pitting scattered on the barrel. Notably, there is a patch of pitting around the flashhole and some light wear around the muzzle. The markings remain clear. The screwheads have light tool-marks but they remain serviceable. Overall, the pistol is in Very Good condition for an Antique.

Our Assessment: This is a Robert Johnson manufactured Model 1836 flintlock muzzleloader pistol that was made for service with the U.S. military. The Model 1836 was made by two gunsmiths under contract with the United States; Asa Waters of Millbury, Massachusetts and Robert Johnson of Middletown, Connecticut. The gun was the last American military sidearm to be manufactured with the flintlock ignition system and it is considered the most effective flintlock handgun made for the US military. It was the standard issue US military sidearm during the Mexican American War and a number of percussion conversions were still in service during the Civil War. This particular specimen has not been altered and retains its flintlock ignition system, it is nicely preserved with crisp markings. Mechanically this ergonomic handgun remains in good working order. This is a great option for fans of historical and antique firearms. Good luck on your bid!