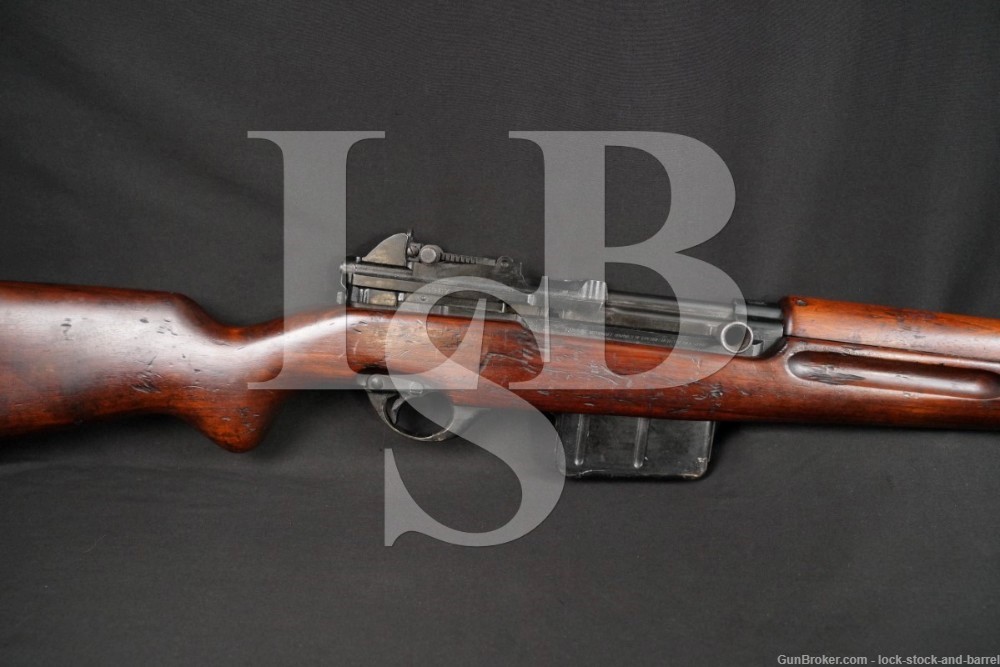 Barrel Length: Approximately 23 inches. 24 ½ inches to the end of the muzzle break.

Stock Configuration & Condition: The two piece hard wood stock has a pistol grip, finger grooves, metal nosecaps, barrel band, sling loop, and a corrugated metal buttplate. The buttplate shows scratches and surface erosion. The wood shows numerous scrapes, scratches & compression marks. Several have damaged or removed small areas of the surface wood. The LOP measures 13 1/4 inches from the front of the trigger to the back of the buttplate. The stock rates in about Very Good overall condition.

Bore Condition: The muzzle and grooves are light gray. The rifling is deep. There is fouling and light erosion in the grooves. The fouling should clean up some.

Overall Condition: This rifle retains about 95% of its metal finish. The metal shows several small scrapes & scratches. The receiver and bolt show operational wear.  The markings are deep. Overall, this rifle rates in about Very Good Plus condition.

Box, Paperwork & Accessories: The rifle comes with one magazine that shows scrapes and scratches. It is in about Very Good Plus condition. The hull, spring and follower are designed as one unit but the follower pops out of the hull when removed from the rifle. Magazines can only be loaded when in the rifle. This is just the way the rifle magazine was designed, there is no defect.

Our Assessment: The Fabrique Nationale Model 1949 (FN49) was used by the militaries of Argentina, Belgium, the Belgian Congo, Brazil, Colombia, Egypt, Indonesia, Luxembourg, and Venezuela. This Venezuelan FN 49 is chambered in 7mm Mauser and is in Very Good Plus condition. It has a great Venezuelan crest and nice deep markings on the metal that include matching part numbers. This Fabrique Nationale Model 1949 has a good bore that should be a ton of fun to shoot. It is desevers of a place in your gun safe. Good luck.