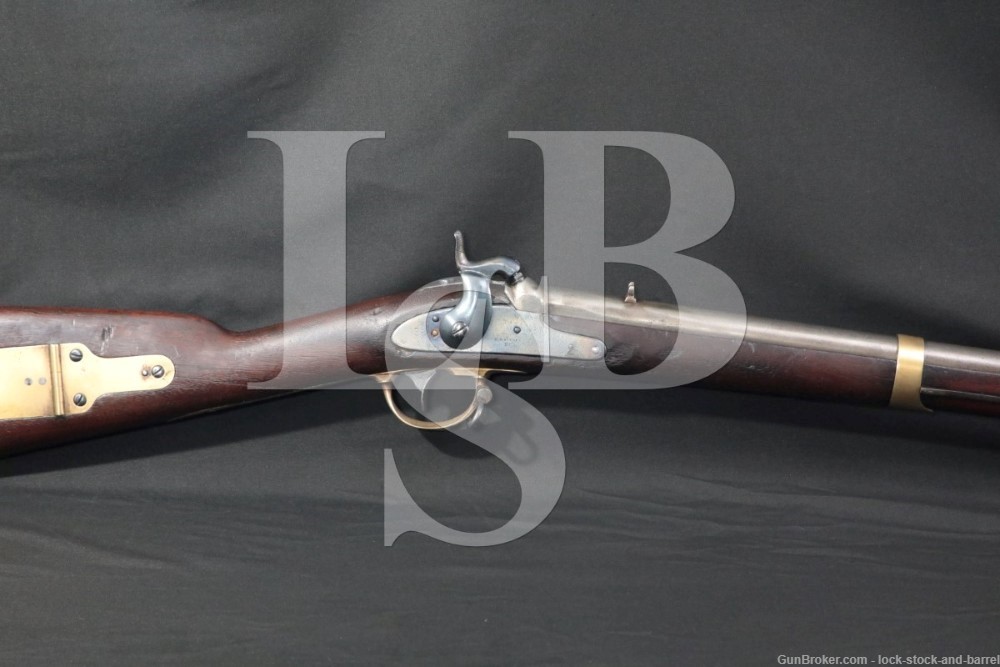 Sights/ Optics: The front sight is a brass blade fixed by the muzzle. The rear sight is a “V”-notch fixed slightly ahead of the breech.

Stock Configuration & Condition/ Grip: The refinished wood stock features a brass nose-cap secured by a spring with sling swivel fixed to the bottom, a slot in the forend for the included ramrod, a brass barrel band secured by a spring, a lock-plate opposite a brass side-plate, a straight wrist, a sling swivel fixed to the front of the trigger guard, a straight comb, a brass patchbox and brass butt-plate. The stock has some light handling marks, nicks and scuffs. Notably, There is a ding between the barrel band and nose cap on the left side of the ramrod’s provision. Also, there’s a light scratch on both sides of the forend between the barrel band and nose cap, there are some compressions surrounding the side-plate, there is a light crack that extends from the top screw to the chamber, there is scattered compressions on the butt, there is a light crack on the left side of the butt by the toe, there is a light crack between the patchbox and bottom tang, plus there is a crack between the patch-box and butt-plate. Finally, there is a moderate ding at the bottom rear portion of the lock, a crack extends from the rear end of the lock onto the wrist, there is a very small light crack that extends from the front of the lock onto the stock originating from a light ding and there is a light ding on the right side of the forend just behind the nose cap. The LOP is 13.75” from the trigger to the rear end of the butt-plate. The refinished butt-plate has some light handling marks. Overall, the stock is in Very Good condition for a refinished Antique.

Bore Condition: The bore is semi-bright with mostly sharp rifling. There is scattered light erosion in the bore.

Overall Condition: The rifle retains about 30% of its metal finish. The brass parts have been polished, but they have some light handling marks, light surface oxidation and a few scattered spots of light verdigris. The barrel is now in the white and has some very light patches of light surface oxidation. The lock-plate’s case coloring is faded and has some light handling marks. There are some light handling marks, nicks and scuffs on the gun’s metal surfaces. Notably, there are some scattered patches of light pitting including some patches visible under the refinished lock’s finish and some light wear around the muzzle. The markings remain clear. The screwheads have some light tool-marks and remain serviceable. Overall, the rifle is in Very Good condition for a refinished Antique.

Box Paperwork and Accessories: The gun comes with a brass tipped ramrod.

This is a Whitney Model 1841 U.S. Percussion Rifle-Musket which was manufactured by Whitney Arms Co. This gun was Eli Whitney Junior’s (the famous inventor’s only child) first contract with the government, but it would prove a fiscal disaster for Whitney. The Whitney made Model 1841s were beautifully fabricated and supplied in large numbers, but the contract price did not cover the tooling and set costs for the guns. Eli Whitney Jr. later recalled that despite manufacturing the Model 1841s for over a decade (ca. 1843-1855) he never made any profit from the venture. This particular specimen has been nicely refinished and retains its distinct charm. It has the distinct features of the early production models including the brass tipped ramrod (later units were made with steel ramrod tips to accommodate Minie bullets). The gun remains mechanically sound and is a testament to the quality craftsmanship that went into arms manufactured by Whitney Arms Co. This is a great option for collectors of historical firearms. Good luck on your bid!