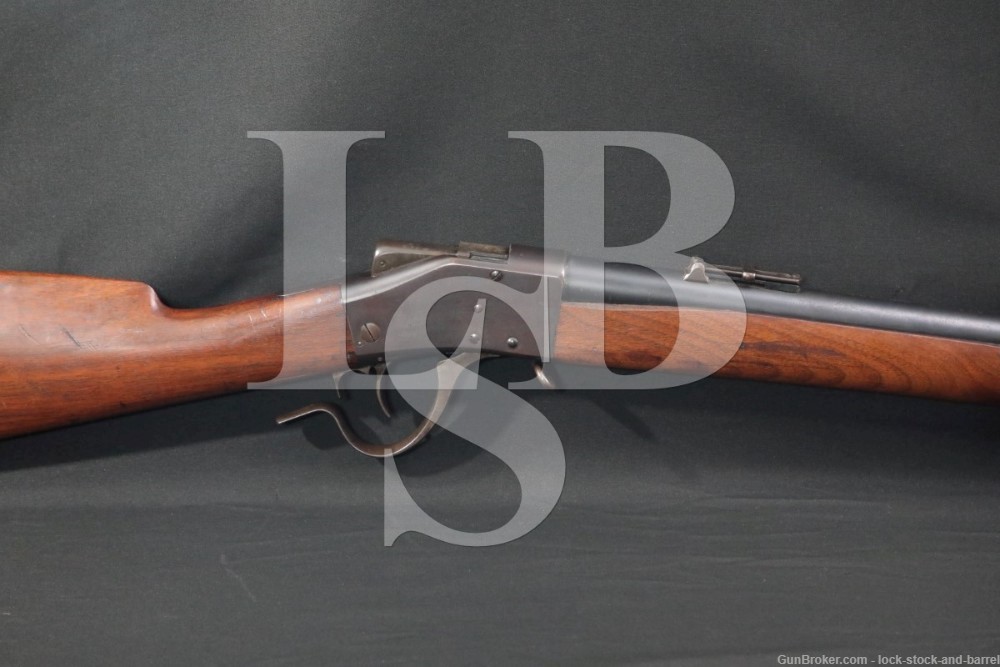 Sights/ Optics: The front sight is a blade fixed by the muzzle. The rear sight is a ladder which presents a “V”-notch in the down position and when raised features a “V’-notch slider. The ladder is marked 3-10, inclusive.

Stock Configuration & Condition/ Grip: The refinished military style stock is two-piece wood featuring a nose-cap, a slot in the forend for a cleaning rod (no cleaning rod is included with the rifle), a total of two barrel bands secured by screws (the front barrel band has a fixed sling swivel), a sling swivel fixed to the bottom of the action which is situated just ahead of the lever, a straight wrist, a straight comb and metal butt-plate. The stocks have some light-moderate handling marks, nicks and scuffs. Notably, there is a light chip on the right side of the stock where the forend meets the action, there is light wear on the rear upper-left portion of the forend, the left side of the forend has a light crack which originates at the frame, the right side of the wrist has a crack that originates at the frame, the left side of the wrist has a similar crack that also originates at the frame, there is a small patch of moderate dings on the left side of the butt, there are two light cracks that originate at the tip of the top tang and some light compressions concentrated on the belly. The LOP is 13.75 inches from the trigger to the rear end of the butt-plate. The butt-plate is coated in light-moderate surface oxidation and has some light handling marks. Overall, the stock is in Very Good condition for a refinished antique.

Bore Condition: The bore is semi-bright with mostly sharp rifling. There is some light erosion concentrated in the grooves.

Box Paperwork and Accessories: There is a metal tang included with the rifle.

Our Assessment: The Model 1878 Sharps-Borchardt Rifle is really the brainchild of German weapons designer Hugo Borchardt (1844-1924) more so than Christian Sharps. Borchardt came to the United States in 1860 and worked for both Colt and Winchester before accepting a position with Sharps Rifle Co. While working for Sharps Rifle Co. he developed the Model 1878, the gun has a similar aesthetic to the original Sharps but uses a hammerless action patented by Borchardt in 1877. The gun was actually revolutionary in that it employed coil springs instead of flat ones which arguably made it the strongest rifle action of the 19th century. Borchardt returned to Europe in 1881 following the collapse of the Sharps Rifle Company where he would later develop the C93 semi-automatic pistol while working with Ludwig Loewe & Co. (which later became DWM) which was the first mass produced semi-automatic and influenced Georg Luger’s groundbreaking Parabellum Pistol P.08.

This particular Model 1878 Sharps-Borchardt is beautifully preserved with much of its original finish still intact and it remains mechanically sound. The stock appears to have been refinished but the rest of the rifle is original. There is some light oxidation and handling wear, but the gun’s case colored breech block remains aesthetically pleasing and the bluing is still mostly intact. The markings remain clear and crisp. The gun has military style stocks and is chambered for .45-70 Govt. cartridges. This is a great option for historical firearms collectors. Good luck on your bid!