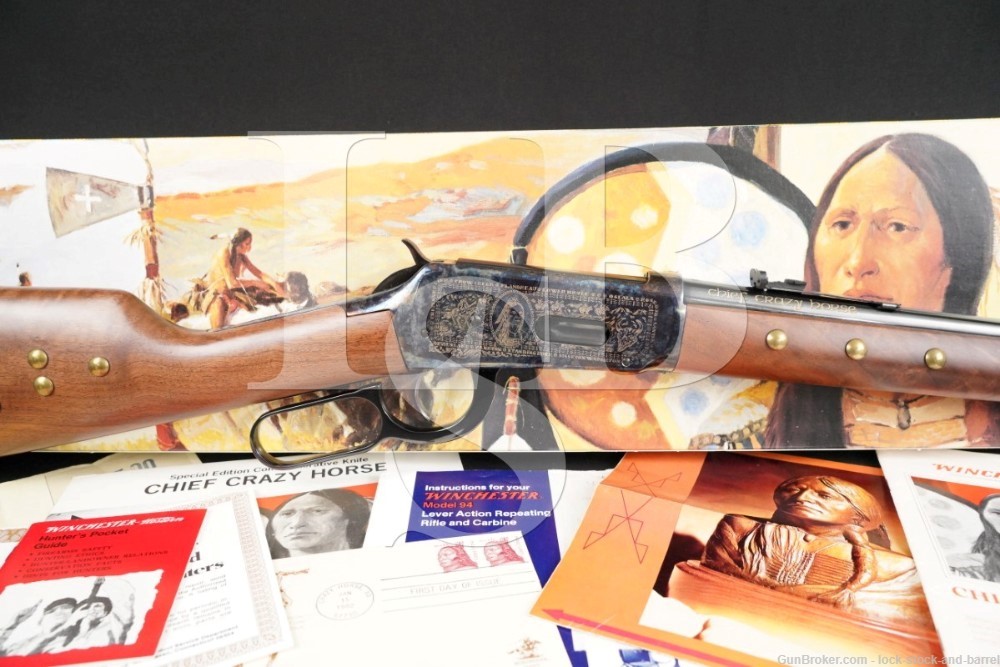 Stock Configuration & Condition: The stocks are two piece American walnut with a capped forearm, straight grip and comb, and a blued steel buttplate. There are brass beads on the right side of the buttstock in the shape of an arrowhead as well as lined on the sides of the forearm. There is an integral sling stud on the bottom of the forearm cap. The wood shows sparse faint marks but no major imperfections. There are no chips or cracks. The LOP measures 13 1/2” from the front of the trigger to the back of the steel buttplate, which shows no significant wear. The stocks rate in about Excellent overall condition.

Overall Condition: This rifle retains about 99% of its metal finish. The balance of the finish shows no notable wear, just a few light handling marks. The screw heads are sharp. The markings are crisp. Overall, this rifle rates in about Excellent condition.

Mechanics: The action functions correctly. There is a lever safety present and the hammer has a half cock safety position. We did not fire this rifle. As with all used firearms, a thorough cleaning may be necessary to meet your maintenance requirements.

Box, Paperwork & Accessories: This rifle comes in a matching two-piece foam box with a cardboard sleeve and an assortment of paperwork including a manual. There is a puncture in the bottom of the base foam ray and the sleeve shows small tears at the ends.

Our Assessment: Crazy Horse was a Lakota war leader of the Oglala band in the 19th century. He took up arms against the United States federal government to fight against encroachment by white American settlers on Native American territory and to preserve the traditional way of life of the Lakota people. His participation in several famous battles of the Black Hills War on the northern Great Plains, among them the Fetterman Fight in 1866 in which he acted as a decoy and the Battle of the Little Bighorn in 1876 in which he led a war party to victory, earned him great respect from both his enemies and his own people. Manufactured in 1983, this Winchester 1894 commemorates this great warrior. The rifle remains in excellent condition with 99% original finish remaining, a bright bore, and solid mechanics. Don’t pass up on the opportunity to bring home this beautiful rifle. Please see our photos and good luck!