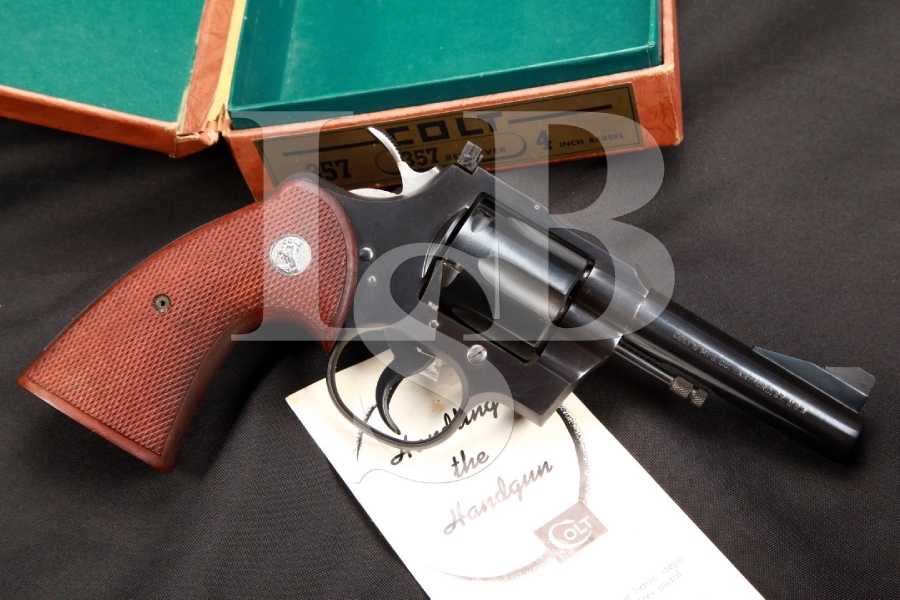 SOLD FOR: $7,114.67
Make: Colt’s MFG. Co.
Model: Model .357 Magnum
Serial Number: 4
Year of Manufacture: 1954
Caliber: .38 Special and.357 Magnum
Action Type: Single and Double Action Revolver with Swing-Out Cylinder
Markings: The left side of the barrel is marked “COLT .357 / .357 MAGNUM CTG.” The left side of the frame is marked with a Rampant Colt logo. The yoke is marked “4” and the yoke cut is marked “4 / 7 / K”. The left side of the trigger guard is marked with the Triangle “VP” proof and an “L”. The right side of the barrel is marked “COLT’S MFG. CO. HARTFORD, CT. U.S.A.”
Barrel Length: 4” Round Bull Barrel with Exposed Ejector Rod
Sights / Optics: The front sight is a serrated ramped blade with a rounded front corner on a serrated ramped base, machined from a single piece of steel. The rear sight is a Colt Accro square notch leaf adjustable for windage and elevation pinned to the top strap.
Stock Configuration & Condition: The two piece checkered oiled walnut target style grips sport a silver Rampant Colt medallion on each panel. The grips are fully checkered. The checkering is sharp with only mildly flattened points and very little evidence of handing are present in the wood surfaces. The grips rate in about Excellent overall condition.
Type of Finish: Duo-Tone Blue
Finish Originality: All Original
Bore Condition: The bore is bright and the rifling is sharp. There is no erosion in the bore. Traces of barrel grease are apparent at the end of the bore, a strong indication that this revolver has never been fired, or at least stored properly.
Overall Condition: This handgun retains about 97% of its metal finish. The Duo-Tone finish is polished on the barrel and sides of the frame while the edges of the frame and cylinder flutes is bead blasted to a matte finish. A spot of finish thinning is visible on the front corner of the front sight, on the leading face of the front sight mount and on the underside of the yoke. Only scattered shallow handling marks are visible on the barrel and frame including a light scratch on the left side of the frame above the trigger guard. Light mars are visible in the matte finish of the trigger guard. Shallow drag marks are visible on the cylinder along with two small patches of surface erosion. Traces of grease can be found in the protected areas and under some of the mechanics. The hammer checkering, trigger grooves and grooved back strap are sharp. The muzzle is in-the-white and a spot of solid surface erosion is visible. The screw heads are sharp. The markings are clear. Overall, this handgun rates in about Fine to Excellent condition.
Mechanics: The action functions correctly but is gummy. It seems to be packed in viscous grease, perhaps indicating that pistol has not been fired. We did not fire this handgun.
Box, Paperwork & Accessories: The revolver comes in an original cardboard Colt box with a faux wood grain veneer and a gold Rampant Colt logo on the lid. A rectangle of adhesive is visible on the lid along with spots of finish loss. The corners are mildly frayed and the corner seams are separating. The veneer which acts as the lid’s hinge shows signs of fatigue. A gold Colt label is affixed to the left end of the box which reflects the model and barrel length of the revolver. The interior surfaces of the box are green. A gold Colt logo adorns the interior of the lid and “COLT” / a Rampant Colt logo / “COLT’S MANUFACTURING CO. / HARTFORD, CONN., U.S.A.” is marked in gold on the floor. Marks from contact with the pistol are evident on the lid and floor. The box rates in Good to Very Good condition. A “Handling the Handgun” pamphlet is contained within the box, which shows oil stains and shallow marks. The pamphlet is in Very Good condition.
Our Assessment: The Colt Model .357 Magnum revolver was introduced in 1953 as a deluxe edition of the Trooper and brought to production in 1954. This Model .357 Magnum features a wide target hammer, grooved backstrap and trigger, ‘bull’ barrel and smooth cylinder latch. The front sight and base are machined from a single piece of steel with a rounded front corner and the rear sight is an early version Colt-Accro adjustable blade. The pistol sports the Colt Duo-Tone blue finish, with polished barrel, frame and cylinder, complimented by bead blasted, matte blue flutes and frame edges. The muzzles of the early Model .357 Magnum pistols were left in-the-white. This revolver retains about 97% of its metal finish with scattered shallow marks visible. A patch of surface erosion appears on the unfinished muzzle crown and scattered light marks are present. The pistol comes in an original Colt box in Good condition. Only one Model .357 Magnum revolver was manufactured in 1953 and serialization began with number ‘1’ in 1954. This pistol bears serial number ‘4’ and is thus the 5th Model .357 Magnum ever produced. Unfortunately, the Python debuted in 1955, eclipsing the Model .357 Magnum’s appeal. By 1961 the Model .357 Magnum was absorbed back into the Trooper line of revolvers, leaving only 15,000 units in existence. This is a VERY early example of a rare Colt revolver in Fine to Excellent condition, waiting to add a unique element to any high end Colt collection.