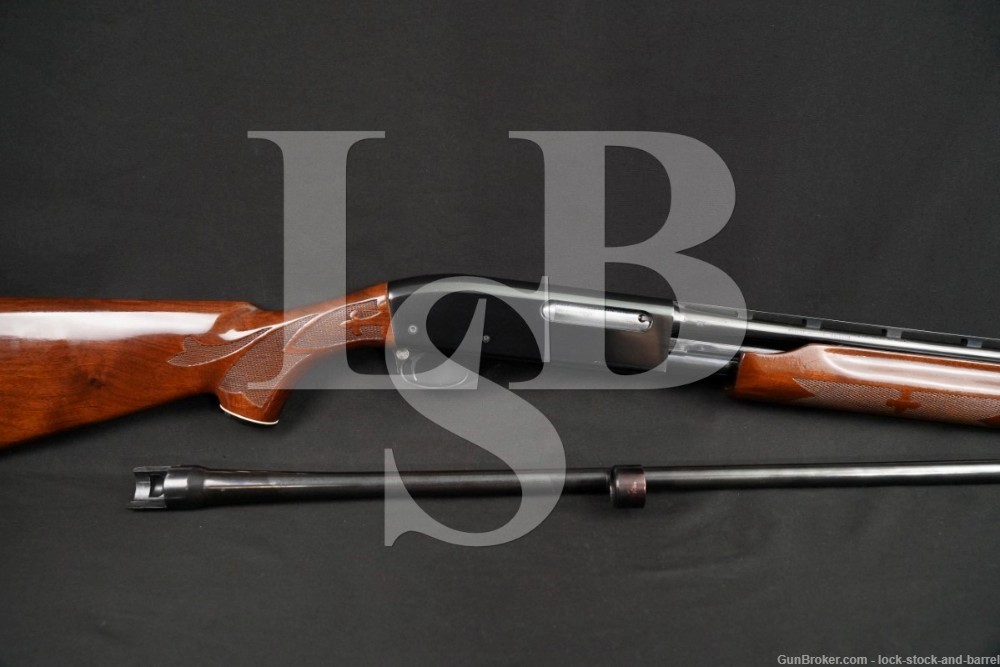 Sights / Optics: The front sight is an aftermarket metal bead in a base that is fixed to the rib at the muzzle. There is a smaller metal midbead. The top of the receiver and rib are serrated for glare reduction.

Stock Configuration & Condition: The stocks are press checkered wood with fleur di lis accents, finger groove forend, capped pistol grip, and the buttstock has a fluted straight comb. There are some scattered little draglines and compressions. There are some little patches of finish loss and some bubbled finish, the most noticeable are on the top and bottom of the wrist. There are a few little marks through the finish. There are some scattered light handling marks. There are no chips or cracks. The checkering is strong. The LOP measures approximately 13 7/8″ from the front of the trigger to the back of the brown vent rubber Remington buttpad. The pad has become slightly stiff and has scattered wear. The stocks rate in about Fine overall condition.

Box, Paperwork & Accessories: Included is a 25″ vent rib barrel with a Fixed Modified choke and a metal bead front sight. The barrel has a bright bore with no erosion.

Our Assessment: Remington had always wanted to best the Winchester Model 12, and when they realized it could not be done with the bottom ejecting Model 17, they introduced the Model 31. The Model 31 was made from 1931 to 1949 and was Remington’s first-ever side-ejecting shotgun. It did well, but it too was not up to the task of beating the Model 12. With less than 200,000 produced of all gauges combined, the Model 31 would soon be discontinued, but elements of its design would be carried on to a new shotgun that would become one of the most popular guns ever made. In 1950, Remington introduced their new modern, streamlined, rugged, reliable, and relatively inexpensive shotgun – the 870. They reached two million guns by 1973 (ten times the number of Model 31 shotguns it replaced). As of 1983, the 870 held the record for the best-selling shotgun in history with three million sold. They have been used by militaries, police departments, and sportsmen all over the world. This one is a .410 bore Wingmaster that comes included wtih a 25″ Fixed Skeet barrel and a 25″ Fixed Modified barrel, both with vent ribs. It has hardly any wear, the action is sound and the bore is bright, this will be a great field gun. Please see our photos and good luck!