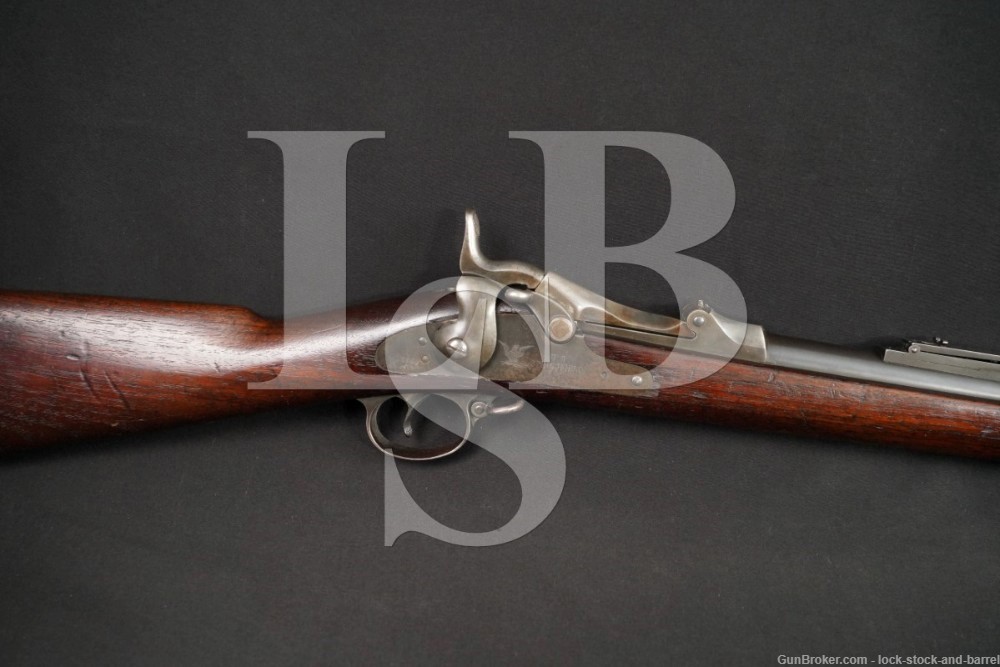 Sights/ Optics: The front sight is a blade fixed by the muzzle. The rear sight is a Buffington rack-and-pinion type sight with clear markings (including “R”) that functions normally.

Stock Configuration & Condition/ Grip: The wood stock features a slot in the forend for the distinct ramrod-bayonet, two barrel bands secured by springs (the front barrel band has two sling swivels fixed at the bottom, the forward swivel is damaged), a lock-plate, a sling swivels fixed to the front of the trigger guard, a straight wrist, a straight comb and metal semi-crescent butt-plate with a storage compartment. There are some light handling marks, nicks and scuffs on the stock. Notably, there is a small chip at the front right portion of the forend adjacent to the ramrod-bayonet assembly, there is a light ding above the rear barrel band spring, there are two light dings behind the rear barrel band, a light nick ahead of the lock-plate and there are some scattered light compressions on the butt that are concentrated on the belly. The LOP is 13.75” from the trigger to the rear end of the butt-plate. The butt-plate has no metal finish, is coated in patches of light surface oxidation and has some light handling marks. Overall, the stock is in Very Good condition for an Antique.

Bore Condition: The bore is mostly-bright with sharp rifling. There is light erosion concentrated in the grooves.

Overall Condition: The rifle retains about 50% of its metal finish. The gun has scattered light-moderate handling marks, nicks and scuffs. Notably, there are several patches of finish loss which include two notable patches between the barrel bands and a patch on the trigger guard. The portions of the rifle where the finish has worn off have taken a patina color from light surface oxidation. Also, there is light wear around the muzzle and some nicks around the front sight. The markings remain clear. The screwheads have only light tool marks and remain serviceable. Overall, the rifle is in Very Good condition for an Antique.

Box Paperwork and Accessories: There is a ramrod-bayonet distinct to the Model 1888 included with the rifle.

Our Assessment: Erskine S. Allin was the Master Armorer at Springfield Armory at the end of the Civil War and was tasked with converting surplus muzzleloaders into more modern breech loaded rifles. Working around the same time as Jacob Snider (an American salesman who patented a breech-loading system which he sold to the British), Franz Wänzl (a Viennese gunsmith who patented a breech-loading system with the Austrian Empire) and several other innovators, the Allin system was born in 1865. All of these systems were quite similar with only minor variations. The Model 1865 was patented in September of that year (several months after the Civil War) and was soon dubbed the “Trapdoor” rifle. The next evolution in the Allin system came a year later and is remembered as the Model 1866 “Second Allin Conversion”, built on M1863 muzzleloaders the gun had improved ballistics over his prior action. The gun was chambered for the then modern .50-70 centerfire cartridge and proved a formidable weapon for its time. Approximately 52,000 of these rifles were converted between 1867-1869, half of which were exported to France for service in the Franco-Prussian War of 1870. The next variant was the Model 1868 which, unlike its two predecessors, was fabricated as a breechloader from scratch, although surplus parts from obsolete muskets were still used in its construction. This was followed by the Model 1870 which was quite similar to the Model 1868 but had a smaller receiver and was not serial numbered, only about 11,500 were made. Several other variations were produced over the course of the 1870s and 1880s.

This particular specimen is a Model 1888: it has the distinct ramrod-bayonet, appropriate cartouches and the correct serialization. The gun has the distinction of being the final large caliber single shot rifle to be adopted for US military service before the introduction of fixed magazine bolt-action rifles. This is a great option for historical firearms collectors. Good luck on your bid!